Yup’ik masks are expressive shamanic ritual masks made by the Yup’ik people of southwestern Alaska, and one of the most popular forms of native Alaskan art.

The Yup’ik masks vary enormously but are characterized by great imagination. They are typically made of wood, and painted with few colors.

The Yup’ik masks can be carved by men or women, but mainly are carved by the men. The shamans (angalkuq) were the ones that told the carvers how to make the masks.

Yup’ik masks could be any size from small three-inch finger masks or maskettes, to massive ten-kilo masks hung from the ceiling or carried by several people.

These masks are used to bring the person wearing it luck and good fortune in hunts. Over the long winter darkness, dances and storytelling took place in the qasgiq (communal, ceremonial houses) using these masks.

They most often create masks for ceremonies but these masks are traditionally destroyed after being used.

After Christian contact in the late nineteenth century, masked dancing was suppressed, and today it is not practiced as it was before in the Yup’ik villages. 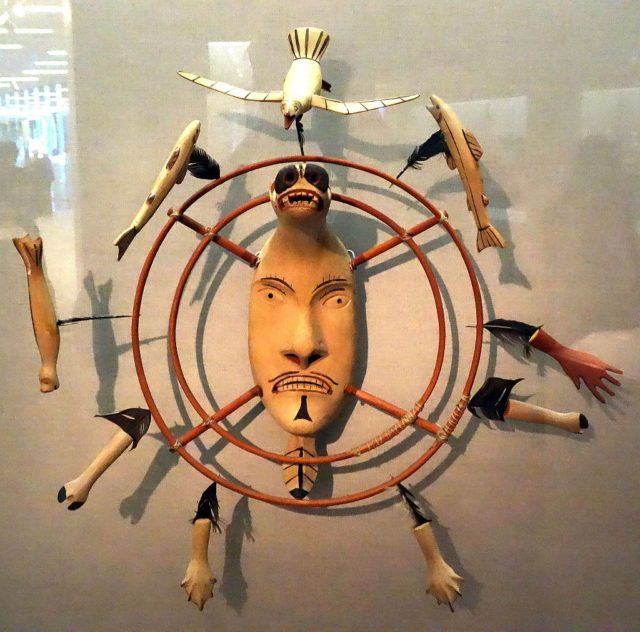 While the Iñupiaq and Yup’ik Inuit are culturally and ethnically related, separated only by language differences and geographical distance, they have developed distinct versions of similar traditional mask forms.

In the case of the Iñupiaq, masks are typically less elaborate than those made by their Yup’ik neighbors to the south-east, and usually smaller, covering only the face.

Another Article From Us: Mammoth Graveyard Being Looted by Black Market Hunters