Parts of the Marshall Islands are Still More Radioactive than Chernobyl

In 1986 the reactor meltdown in Chernobyl caused damaging radiation to not only render the immediate area uninhabitable, but also to spread to many other parts of Europe.

Since then, ongoing cleanup work has significantly reduced, if not eliminated, the amount of radioactive contamination, but many people still associate the 1,000 square mile restricted zone that remains with the nuclear disaster in history.

At this point, however, there are other areas which are more severely contaminated.

The United States conducted 67 nuclear tests in parts of the Marshall Islands in the years following World War II. 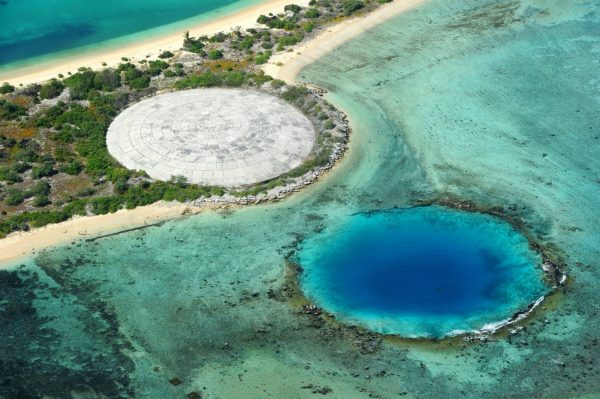 Thanks to a recent study conducted by Columbia University, we know that parts of the area are more severely contaminated than Chernobyl as a result of that testing.

According to Business Insider, the scientists conducting the study took 39 separate soil samples from 11 of the islands in the chain.

Those samples showed high levels of radioactive material, including two types of plutonium, cesium, and americium.

Four of the islands, in particular, show levels of radioactivity that surpass the amounts found at Chernobyl and Fukushima.  One of those islands has radiation that are reported to be 1000 times higher, in fact, according to the LA Times.

The four islands showing the worst levels of contamination are all uninhabited.  Bikini, Runit, and Enjebi are all in atolls where the nuclear testing occurred, but the last of the four islands, Naen, is nearly 100 miles away.

The highest levels of radiation were on Bikini Island, which was the site of the US’s largest H-bomb test, and also where they sunk dozens of radioactive ships.

The same island also had more than 1000 times the amount of plutonium found at either Fukushima or Chernobyl.

The researchers did a total of four studies.  In another of them, they discovered that fruit growing on some of the islands not only has more cesium-137 than is permitted in the international food safety standards, but the quantity they found exceeded that which was found in Chernobyl 10 years after the disaster occurred.

On Naen, they found elevated levels of plutonium-238, which suggests that it was being used as an unreported dumping ground for radioactive waste.

Plutonium-238 is an isotope that is generally associated with nuclear waste, not fallout, according to Ivana Nikolic Hughes, one of the researchers involved in the work.

The same isotope was discovered at Runit, where the US was storing nuclear waste under a concrete dome which is leaking.

Hughes said that while they aren’t absolutely certain that Naen was used as a dumping site, it would still be a bad idea for people to try to live on Rongelap Atoll, where Naen is located, until the situation has been addressed.

The results of the work were published in the Proceedings of the National Academy of Sciences, and have caused debate over the American government monitoring the health of the inhabitants of the Marshall Islands and whether or not the amount of radiation found there is safe for those who do.

There are some experts who think that Rongelap is safe enough for people to come back to the area, although this study strongly suggests that neither Rongelap nor Bikini Atoll are safe for habitation until cleanup measures have been executed.

Enewetak Atoll, which includes Runit and Enjebi, has already had 600 people return.  Besides the general level of radiation in the worst-affected areas, there’s also worry about the effects of eating food that has been grown there, especially around Naen, as it is unclear how much of an effect the cesium levels would have on those who consume it.

Terry Hamilton is the US Department of Energy’s lead researcher with regard to the radiation issues on the Marshall Islands, has cast some doubt on the validity of the Columbia team’s research.

He said that while their approach appeared to be reasonable, it was possible that their methods and equipment could be overestimating the amount of radiation that persists in the area.

Hughes and her team reject the idea that their methods were flawed, saying that the study’s intention was to provide an objective and independent assessment, free of governmental bias.

Remediation for dealing with the contamination has been going on in parts of the island chain for years, but this newest study suggests that there is still a long way to go before the area is truly safe again.