Coral Castle is constructed from 1,100 tons of oolite, a type of coral rock, and is surrounded by an eight-foot wall, secured by a nine-ton door, and stocked with various shapes, furniture, and other curiosities, all made from the same coral stone.

At the peak of this monument’s construction activity, one lone worker labored at the site. It still stands as a monument of his love.

In 1631, construction began on the Taj Mahal, selected in a worldwide vote on New7Wonders as one of the “New 7 Wonders of the World” in 2007. The Taj Mahal was a memorial from emperor Shah Jahan to his beloved wife. 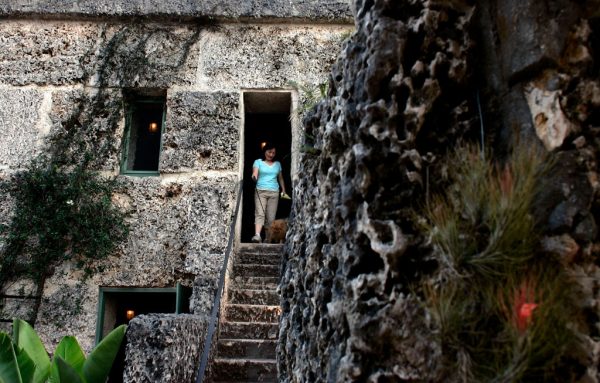 The major part of the work was completed in 1648 and ten years later the gardens and enclosure were completed. At the peak of the construction activity, over 20,000 workers labored at the site. It still stands as a monument of his love.

In a similar vein, construction began on Coral Castle, located in Florida, in 1923. It was completed in 1951, 28 years later. The castle was built as a monument to a single man’s one true love.

Edward Leedskalnin, whose story is told on the website of the Coral Castle Museum, was born in Latvia in 1887.

A diminutive man, just over five feet tall and weighing only one hundred pounds, he was reportedly engaged to marry his one true love, Agnes Scuffs, ten years his junior. However, on the eve of the wedding, she called it off.

Several other sources quote Latvian author Andris Stavro who, in his book Korallu Pils (2007), names Leedskalnin’s lost “Sweet Sixteen” as Hermīne Lūsis. Whatever her true name, Ed Leedskalnin single-handedly created what one could also call a “wonder” of the world.

After his broken engagement, Ed bounced around Canada and the US before finally settling in Florida City, Florida in 1918, where he began working on his coral masterpiece.

In 1936, hearing about upcoming construction near his property, Ed the bought 10 acres in Homestead, near Miami, Florida — and he spent three years moving his castle with him.

Once the carvings were moved, Ed continued working on his construction, building the outer walls of the castle from blocks of coral as big as six tons. Ed worked on his castle and gave tours to curious visitors until his death in 1951.

These construction feats are all the more amazing because Ed, despite his small stature, did all the work by himself, including cutting and moving the huge stones, using only primitive tools.

There were no cranes or heavy equipment involved, only block and tackle arrangements seen in the background in pictures. Ed did most of his work at night, to keep his valued privacy under the cover of darkness.

Little is known about how this man with a fourth grade education accomplished this, although he did apprentice early in life as a stonemason. All Ed would say, when asked, was that he had discovered the secrets of the pyramids and knew how the ancients had built their monuments.

Even after Ed’s death in 1951, Coral Castle remains an engineering marvel. Within the castle are other examples of Ed’s carving prowess such as rocking chairs built entirely of stone that a child can move with a single touch. A 500-pound heart shaped table stands as a valentine to his lost love.

He also built a highly accurate sundial, a telescope, a barbecue, a water well and fountain, and even a royal throne for himself. The highlight of the construction is the nine-ton gate that is so perfectly balanced it can be opened with a single finger.

Because of Ed’s obsession with privacy, little is known about the construction techniques he used, leading to speculation that he used reverse magnetism or some other mystic technique to lift the stones

. Ed even wrote a pamphlet on the subject, Magnetic Current, further stoking the rumor. Others claim he had supernatural abilities and could levitate the stones into place.

However it was done, Ed constructed an amazing edifice, that withstood a Category 5 hurricane in 1992 without a single stone shifting out of place.

Footprints Made by Neanderthals who Walked in Lava Hours After Eruption

So, whether as a testament to love lost or simply a demonstration of one man’s incredible ingenuity, Edward Leedskalnin has made an indelible mark on the Florida landscape and left a wonder for people to both puzzle over and enjoy.