Hults Bruk axes: A work of art produced by a 300-year-old Swedish company

If you’ve spent any time camping or having to process wood for your fire at home you will appreciate a fine axe and one of the things that the Swedes do well is make fine axes.  Even here at Outdoor Revival HQ I’ve got a few, just in case! 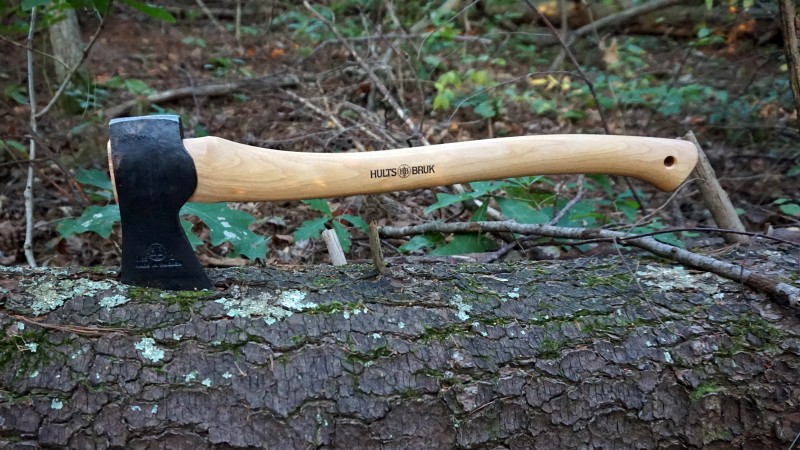 Hults Bruk has been crafting beautiful axes for more than three centuries. The Swedish brand has long been known by European aficionados for its exquisite ironworking and durabe products, producing pieces that are equally at home at the woodpile or mounted over the fireplace. Now, for the first time, amateur lumberjacks in America can buy one without crossing the Atlantic.

Buyers can choose from several different styles, including the compact Jonaker backpacking hatchet, the Bjork splitting axe, and the Motala double bit-throwing axe. All models come with a tanned leather axe-head cover.

The Hults Bruk works was established in 1697, 79 years before the United States declared independence from Great Britain. Today the factory is a compelling combination of the new and the old, where the underlying culture and character of exquisite Swedish ironworking has endured since the beginning. Hults Bruk now produces axes for all modern applications, from backpacking to hunting to professional forestry.

The Hults Bruk factory is located just north of the Swedish city of Norrkoping. The location was selected in the late 1600s because of its advantageous spot at the end of a valley and at the edge of a forest while being next to an active stream.

That stream provided power through a water wheel. The facility is dominated by a white mansion that was built at the start of the 20th century and that now serves as the administrative offices. Around a hundred yards from that building is the ironworks. There is a road down to the lake which is lined by small red cottages with black trim. Those small buildings are where blacksmithing took place in the past. Also on site are four apartment blocks that were built for workers in the 1800s. The buildings have the curious names of “Zion,” “Bethlehem,” “Langholmen,” and “Rome.” The apartments have been modernized over time and are still in use today.

It all started in 1697 with forging by hand using water driven hammers. Products being fabricated in the beginning included nails and iron bars which were then followed by hand tools such as axes and spades. From its founding until the 1820s the facility was owned by absentee wealthy nobles. Around 1820 the family Ekelund took over the complex. Three generations of Ekelunds ran the Hults Bruk works for over 100 years. The family lived on-site for the entire time of their ownership. In the late 1870s the owner and ironmonger Gunnar Ekelund took the initiative to make axes according state-of-the-art American production methods. In 1887 he traveled to America to study those industrial methods and to buy modern machinery. An additional purpose of his trip was to open up a new market for Hults Bruk axes in the United States where the first axes were sold in the late 1880s. Gunner Ekelund died in 1928 at the age of 78 after running the company for 42 years, but not before setting the Hults Bruk works on a course of modernization.

The next development milestone occurred in the 1930s when there was a great deal of development effort put into finding more effective ways to forge a blade edge that would maintain sharpness over time and use. The production and materials breakthroughs that occurred in that pre-war era have endured and are evident in today’s axe product line.

You can buy a Hults Bruk axe from about $100 and remember, this is a tool, that if looked after will last a lifetime.

Have a look here for more information Hults Bruk

If you have a good story to tell or write a blog then let us know about it on our FB page.  We’re also happy to receive article or review submissions and we’d love to hear from you.