Strange ICE VOLCANOES Form on a US Beach

We don’t usually associate volcanoes with wet, cold waters — we think of them as sources of raging fires and eruptions of massive, scalding lava streams, like Mount Etna or Mount Vesuvius, which covered Pompeii so many centuries ago.

But there is another type — “ice volcano” — that shoots out huge sprays of water on the shores of large lakes. Or at least this particular natural phenomenon has earned that nickname, even if it’s not really, strictly speaking, a volcano at all.

Nonetheless, this peculiar sight warrants the comparison, even if the two aren’t truly akin in scientific or geological terms.

The most recent example of ice volcanoes was caught on video last weekend at Lake Michigan, at Oval Beach. A worker for the National Weather Service (NWS) Grand Rapids was out walking along the beach about a week ago, and observed this rare, odd sight along the icy shore.

Streams of water were bursting straight up out of the ice, like an actual volcano blowing its top, so to speak. The employee sent out a notice on the NWS social media feed, telling folks on Twitter, “You never know what you’ll find at the lake until you go there.

Today it was volcanoes.” He posted pictures of the water bursting through the ice and shooting straight into the air, before plunging back into the lake’s freezing water.

What is responsible for this odd sight? According to Tom Niziol, a blogger who contributes to “Weather Underground Category 6,” water churns under the sheets of ice, builds up pressure, then sends the water shooting into the air.

Imagine a pot of water on the stove boiling over and hurtling its lid through the air and you’ll have a vivid picture of how an ice volcano develops. When the water shoots up, if the air that surrounds it is frigid enough, the water kind of flash freezes on the spot.

That doesn’t mean its a solid structure that’s safe, however; it is unsteady and empty within. As Niziol explained last week to USATODAY.com, “(Ice volcanoes) are very dangerous to climb on…they are hollow and build over that hole in the ice. Don’t ever go venturing out onto them,” he cautioned. 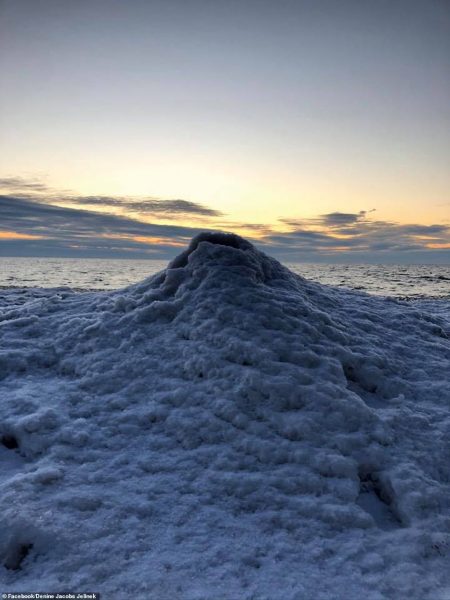 Matt Benz, a meteorologist with AccuWeather.com, explained on its website that, “Ice volcanoes, which resemble blow holes in Hawaii or the Caribbean, develop as waves crash against the ice shelf, with the spray freezing in layers vertically.”

He agreed that they are indeed a rare sight: “It’s almost a ‘Goldilocks’ situation where you need just the right conditions over a period of time to get these to develop.”

They don’t form along the shores of oceans, he added, because of the saltwater and the more violent waves. To continue the fairy tale analogy, the waves, temperature and other conditions must be perfect for ice volcanoes to form.

“These things are constantly evolving with the wind and waves…it’s a constantly changing winter landscape, which makes each feature unique in its own right,” Benz wrote.

He concurred with Niziol that the unusual spectacle, though beautiful, can be very dangerous to approach, and anyone who sees one should take it in it from a safe distance.

“If you’re lucky enough to see this unique weather phenomenon, enjoy it safely from the shore!” he wrote on AccuWeather.com.

Ice volcanoes are just one of the glorious sights a winter wonderland offers in a place like Michigan, and along the shores of the other Great Lakes in Canada and the U.S. Communities there thrive on cold weather

They learned long ago how to make the most of these chilly environments, with cross country skiing, snow boarding, skating and other activities undertaken by just about everyone.

And as these ice volcanoes prove, even strolling along the beach in freezing weather has its rewards, no matter how low the temperature drops.5