Today I’m going to share two climbing stories that both carry the same message from two different angles: Pick your partners in adventure carefully. In both of these instances, I faced the very possible reality of someone dying because of the error of one of my partners. Although these are both rock climbing stories, they apply to every step you take along the journey. As a climber, I just have more experiences to share from the mountains.

These principles apply anytime you step out the door into the wild unknown. You’re going to be relying on yourself and your teammates. If you don’t feel like you can rely on your teammates to do their job well and safely, maybe you should pick a different team.

To some that may sound a little harsh. To me, I just know better by now. It’s great to spend time with people from all walks of life. But when your life and those of your entire group are on the line, your mentality needs to shift. Although I always knew this in the back of my mind, I had to face the real consequences of mistakes in the backcountry before I learned the weight of what that means.

We were in Leavenworth, WA

The sun was just coming over the jagged skyline. What had been a frosty night was about to give way to a scorcher of a day. Leavenworth, Washington, is often like that in the summer. High altitude and strange pressure systems had kept us huddling for warmth the night before. Flashing back. The previous evening, we had pulled in to our favorite free campsite along the river’s edge and found it already inhabited by a grizzly character. We made friends and soon we were all cooking dinner together. We spent the night around his campfire sharing stories, passing a bottle of whiskey, and eating hot dogs. For reasons that will become apparent, I won’t share his real name. Instead, we’ll call him Mike. But Mike was an impressive guy.

Having grown up in a small rural town in the middle of nowhere, his first time out of his home state was on a trip to Yosemite National Park. The literal birthplace of modern rock climbing. If you’ve ever visited Yosemite, it’s immediately apparent why that is. To Mike, it was both eye opening and life changing.

He quit his job, packed his bag, and in the two years since has hitchhiked around the US climbing. He lives a wildly primitive lifestyle, spends virtually no money on anything, and does what he loves every day. In all senses of the word, he had found spiritual enlightenment in rock climbing. He had been reborn. This guy was like a Buddha. The most interesting part of his story to us all was his penchant for free soloing, or climbing without ropes. If you’re not familiar with just how insane the idea is, watch this.

What is free solo?

Now, free soloing is controversial by just about anyone’s standards. At the time, I still didn’t know what I thought of the idea. Flashing forwards. I’m standing in the warmth of the newly risen sun, squinting up at Mike’s receding figure. As we all packed our gear and finished our coffees, he had cheerily announced that he was going to go ‘warm up’ and would be right back. That had been about ten minutes ago.

Now, he was no less than a hundred meters up the nearby rock formation known as Icicle Buttress. We watched as he quickly and confidently wove his way past some roped parties who had tried to get an early start. They all clearly didn’t know what to make of this guy. He looked as wild as he sounds, trust me. It was less than twenty minutes before he was back at the cars, energized and smiling. We hadn’t even finished our coffee yet.

I stepped over the last rocky outcropping of our approach. The sun was blazing hot overhead, and we had hiked up steep rocky terrain to a new, and less popular crag. We were hunting for a specific climb, a beautiful hand crack through an overhanging roof formation.

Mike had found it, and since he arrived first, he took it on himself to go ‘check it out’ unroped. Normally you would just climb down if you hit any part that tested your abilities in any serious way. That’s what free soloists always say. That’s their defense when people tell them they’re crazy.

Mike found that point, right at the upper edge of the overhanging roof, the last hard move on the climb. But when he found that line in front of people he wanted to impress, on a climb he wanted to do, somehow it all added up to trying it anyways. He tried the move a second time, where he had started to slip the first time.

And then he fell

He fell without a rope, or helmet, or any protective equipment of any sort. Mike was lucky, he tumbled down the rock face in just such a way that when he crumpled into the ground less than three feet in front of me, he only broke one ankle. We got him out of there, we all took a deep breath, and decided to take the rest of the day off.

If one of your partners makes a stupid decision, it can have dire consequences for everyone. What was a fun outing in the mountains can turn into a desperate evacuation or even a funeral in a heartbeat. It can be an obvious mistake like climbing without a rope, or a little one, like forgetting to tie the bear bag up correctly. This is especially true in harsh climates far from help like the mountains, deep forest, or desert. I haven’t climbed with a free soloist since I met Mike, and I don’t intend to. That’s what ropes are for. Or at least, that’s what I thought.

I was out climbing at a secret spot near my home town where all the locals go to climb hard and get strong. As I was not yet, and never have been, particularly strong, I was looking at a day full of burning forearms, shouting at rocks, and falling. That’s fine though, that’s what ropes are for, right?

Well, my morning went just as I had planned. I tried my project (the climb I had been working on) about three times. Each time I had a little more success and figured out a couple more of the moves. But each time, I eventually came pitching off the rock in a sharp drop before my belayer gave me a nice soft catch. 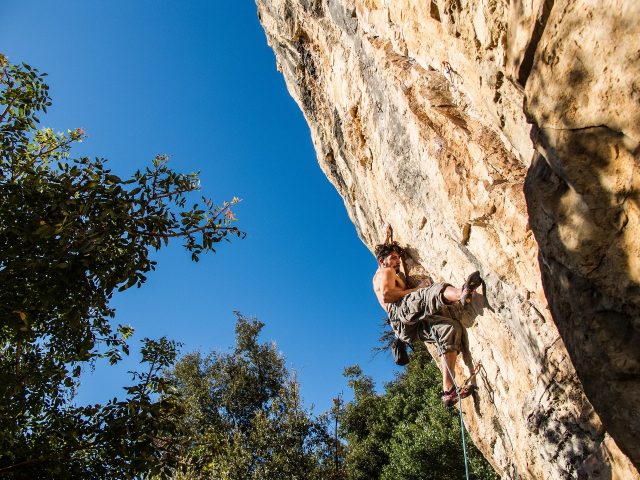 Well, my morning went just as I had planned. I tried my project (the climb I had been working on) about three times. Each time I had a little more success and figured out a couple more of the moves. But each time, I eventually came pitching off the rock in a sharp drop before my belayer gave me a nice soft catch.

I stopped, ate, took some photos. I was feeling pretty good. So, I decided to give it one more shot before going home for work that night. I knew I wouldn’t make the top. I probably wouldn’t even make the third clip, but that’s no problem. When you climb on ropes, you can just come down.

An accident in the making

My friend, who we will call Katia, took the belay. She had spent the day at the other side of the crag working on other projects. And although she wasn’t familiar with the route I was working on, I trusted her implicitly. She’s one of my closest friends. I’ve known her for years. And she’s been rock climbing for a long time.

She wasn’t paying attention, talking to a friend. I reached the third clip, completely gassed. Even as I reached down and pulled up some rope to make the clip, I knew I didn’t have it. That’s when you cut your losses. So, I dropped the rope and yelled down to her, “falling”.

I should have looked and made sure she was watching. But that’s something you just trust your belayer to do when you climb. So, I didn’t notice that she wasn’t even looking at me. I just waited as long as my fingers could hold, maybe two more seconds. That’s when she should have been taking in the extra slack so I wouldn’t fall too far.  But because she hadn’t been watching, she thought I had clipped my rope in. She thought that I was right next to a bolt and would hardly fall anywhere. So, she just held on as I fell all the way to the ground, the rope didn’t do a thing.

A broken ankle, and shattered perceptions

Like Mike, I was unbelievably lucky. I like to think skateboarding prepared me well for falling from high places onto hard surfaces. After all, that’s what 90% of skateboarding is when you’re a teenager.  I only broke my left ankle, falling from at least thirty feet. I didn’t land on any of the many boulders all around the base of the cliff, I didn’t even hit my head as I crumpled into the ground.

These are the only two times I’ve seen a rock climber hit the ground. In both cases, it could have been deadly and definitely should have been worse than it was. If I can live my whole life without the third time, I’ll die happy. Third time probably won’t be a charm. That’s why nowadays, I choose my partners carefully.

First, I don’t let another person’s idea of safety inform my own if I don’t agree. I’m well trained and intelligent. I know when something does or doesn’t feel safe. And whether it’s me, or one of my friends doing something sketchy, I’m the first one to speak up and suggest backing down. Had I spoken up when Mike first found the line, he might have listened and might not have fallen.

Second, I don’t make the mistake of thinking that because someone is your friend, they will make a good partner. This is especially true in climbing, but it holds up in all adventure sports. Some people just weren’t cut out for long backpacking trips, going hunting, or surfing in strong currents. Sometimes your friendships are better left at home.

Katia is a great climber, but she’s not the most attentive bean in the bunch. I certainly choose my belayers more carefully now. To be fair, I’ll probably climb with her again in the future, but I’ll be damned sure to double check that she’s watching me. And I’m not likely to get on a difficult project with her on the other end of the rope.

Some things are easier said than done

These lessons are simple enough to talk about, but it’s harder to put them into actions. Making the choice between safety and friendship is hard. Saying no to the group is hard. Being the one that suggests turning around, taking it easy, or reassessing is not glorious. But for me, I’ve had two chances to learn that lesson the hard way. I might not get a third.

So, draw your own lines where you like. Take safety as seriously as you see fit. Hopefully, by sharing my mistakes, I’ve helped you to avoid making them yourself.