Villa Las Estrellas or “The Stars Town” in English, is a small town in the middle of the Antartic. It was founded in 1984, by Pinochet who wanted to reaffirm Chile’s presence in the area. Today, this Chilean town serves as a research station and is situated in Antártica Commune, Antártica Chilena Province, Magallanes and Antártica Chilena Region.

It is located on King George Island, on the military base, President Eduardo Frei Montalva Base. The island is the larger one compared to the only other island with a civilian settlement on the Antarctic, the Argentina’s Esperanza Base.

Villa Las Estrellas has a population of 15 during the summer and 80 inhabitants in the winter. Nobody is there permanently, people move and leave the island in a period of maximum two years, and then they get back to their homes in Chile. The majority of them are officers from the air force with their families. These people are accommodated in one of the fourteen homes that are 970 square feet (90 m²) big.

There are approximately fifteen children who study at  F-50 “Villa Las Estrellas” School. It is is a 1st-8th-grade primary school where there are two teachers responsible for the children’s education. There is also a separate Kindergarten with only six pupils and one instructor. And there is also a Library – Library No. 291 which has a collection of books and magazines available upon request. At least one can get all the books they want in the library, at the state’s expense. 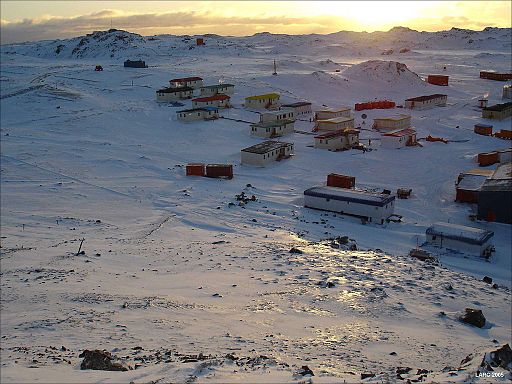 The Chilean Air Force Hospital on the island is equipped with laboratory, anesthesia machine, surgery, sterilizer, X-ray, dental clinic, and pharmacy services in addition to limited emergency and surgery capabilities.

There are only one doctor, one nurse, and two hospital beds. There is a collaboration with the University of Chile and the Chilean Antarctic Institute so that in the case of emergencies, medical images can be sent to the health centers in South America and Europe for diagnosis.

The climate at Villa Las Estrellas is classified as a marine polar climate, which means that the temperatures in winter are much milder than for example in well-populated areas in Canada and Siberia.

But the summers, on the other hand, do not get much warmer, the temperatures are narrowly above freezing and not very welcoming to the inhabitants. And yet, the mean yearly temperature of 27.9 °F (−2.3 °C ) is still considered gentle compared to other places in Antarctica.

There is also a Catholic chapel, Santa María Reina de la Paz which attracts people from all over King George Island. And of course, adventure seekers or simply people that like polar climates or three months of dark, can visit the island.

Besides the chapel, there is a hostel with a capacity for 20 guests, a souvenir shop run by the women in the town, and also a gymnasium where most of the people gather to exercise but as well to play basketball, volleyball, ping pong, babyfútbol, or to enjoy the sauna.