Radioactive Tomb in the Pacific is cracking. In the early morning of March 1, 1954, a huge, red flash split open the sky above the Pacific Ocean.

Within seconds of the bright red flash, a mushroom cloud began to tower high over the Bikini Atoll in the Marshall Islands, eventually reaching an altitude of 130,000 feet and 4 ½ miles wide, according to Atomic Heritage Foundation.

This cloud was caused by an explosion from the U.S. government’s first weaponized hydrogen bomb named “Castle Bravo”.

The explosion was 1000 times as powerful as the nuclear bomb that destroyed Hiroshima and was a complete miscalculation by the United States.

The “Bravo” hydrogen bomb, resulted in an explosion two and a half times bigger than what scientists expected and dropped radioactive ash 7,000 square miles past the bomb testing site onto nearby islands.

According to AtomicArchive.com, although Bikini Atoll was uninhabited, residents of nearby atolls received as much as 200 rems of radiation.

Evacuation of residents began after the explosion, and inhabitants continue to suffer from the ill effects of the massive amounts of radioactivity.

On the atoll nearest the Bravo explosion, Rongelap (100 miles away), 90% of those under age 12 at the time of the explosion developed thyroid tumors years after the event.

In all, the U.S. conducted 67 nuclear weapon tests from 1946 to 1958 on the Marshall Islands. Residents of nearby islands were displaced and had to relocate.

The Times reports that between 1977 and 1980, Enewetak Atoll’s old nuclear test site was cleaned up by around 4,000 U.S. servicemen. Their job was to collect radioactive waste materials. The cleanup included contaminated soil, military equipment, concrete, and scrap metal.

The materials were then deposited into the Runit Dome which the service men later covered with concrete, effectively turning it into a radioactive tomb. 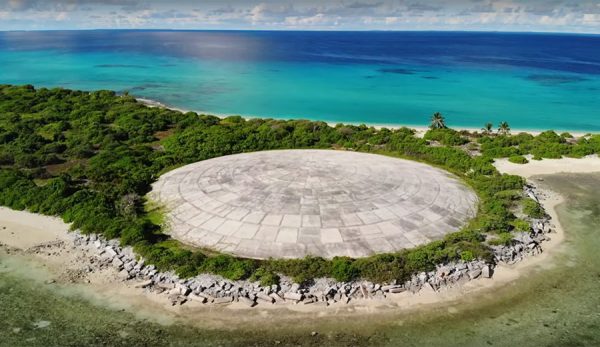 Most of the waste in the tomb is irradiated soil containing plutonium, a cancer causing isotope.

The dome was not built to last forever and the rising seas have begun to seep into contaminated soils within the bottom of the tomb.

While the top of the dome was sealed with concrete, the bottom was not, so water is threatening the structure and causing it to crack open.

The Radioactive Tomb is Cracking

After the nuclear testing and clean up, only three of the atoll’s 40 islands were considered to be safe for human habitation. These islands are home to about 650 people. The island that is home to the radioactive dome is uninhabited.

The U.S. Department of Energy reported in 2013 that radioactive materials could flow from the dome into the marine environment.

This does not necessarily mean that the dose of radiation delivered to the local resident community would change significantly.

However, sea levels continue to rise and are expected to be up to 6 inches higher than they are now. The dome could be completely submerged by the year 2100 due to storm surges and coastal floods caused by the rising sea levels.

Any damage to the dome could present the community with new health risks.

The dome has already begun to crack which weakens the overall structure. This could lead to the structure cracking and opening completely, releasing all the radioactive materials inside.

Scientists are Not Sure About the Radiation Levels

Ken Buesseler, a marine radiochemist has plans to test the soil at the sight. In an interview with the Insider, the expert said concerns of radiation levels may be blown out of proportion.

In order for people to experience adverse health consequences, they would have to inhale plutonium or be exposed to contaminated water through an abrasion.

Scientists are continuing to study the effects of radiation exposure to the island and its inhabitants.