During the Cold War from the late 1960s to the late 1980s the former Soviet Union dumped seventeen thousand items including nuclear fuel, solid radioactive waste and damaged reactors into the Kara Sea east of Novaya Zemlya in Russia.

While there is concern for the low level radioactive waste the biggest problems facing Russia are the reactors which, if they leak, can cause a massive damage to the oceans that could never be repaired in anyone’s foreseeable lifetime.

The cost of retrieving the reactors and the K-27 submarine may be as high as two hundred and seventy eight million euros which is completely out of reach of Russian federal resources.

Among the objects at the bottom of the Kara Sea is Russia’s first nuclear submarine, the K-19, built in 1958 and was armed with three ballistic missiles, according to large.stanford.edu.

Soviet leaders were determined to match the submarine fleet of the United States and rushed the job to the point that the Captain, Nikolai Zateyev, did not trust the submarine for use in combat.  Sea trials were constantly interrupted because of breakdowns but in November of 1960 she was sent out to the Atlantic Ocean.

Eight months later she suffered a radioactive leak due to a faulty pressure gauge.  The pressure built up and with no cooling system the reactor ignited forcing members of the crew to use raincoats and gasmasks to enter the reactor room and fix the leak using water to set up a temporary cooling system.

Within days eight of the crew members died and radiation was spread throughout the submarine.  The reactors were replaced with a new nuclear power unit and the older unit was dumped into the Abrosimova Bay in 1965.  Of the one hundred and thirty nine men, twenty two died of radiation sickness.

According to an article written by Captain 1st Rank (Ret.) Igor Kurdin, Russian Navy and Lt. Cmdr. Wayne Grasdock, USN at publicnavy.mil, in October of 1986 K-219 made its way into the Sargasso Sea when a missile tube began to leak seawater and quickly escalated into a stream of water.

All of the compartments were sealed just before missile tube six exploded.  Much of the vessel was damaged requiring moving men into undamaged locations.

Two men were sent into the reactor compartment to repair the damage but both died before they could complete their tasks.  As fires burned and toxic gases filled the sub, the men were evacuated to the International Naval Fleet ships that had come to offer aid.  She sank on October 6, 1986 with four men lost. 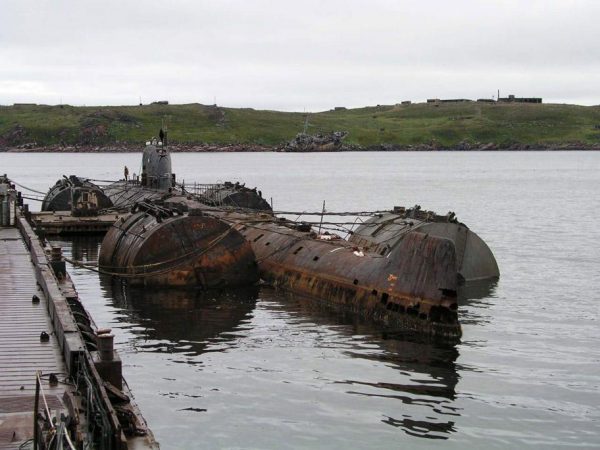 The almost sixty year old vessel sank while it was being towed to the Nerpa scrapping yard north of Murmansk in August 2003.  The barentsobserver.com tells us that while the radiation levels are still high the submarine is safe from any leakage and is being continually monitored.

In May of 1968 the submarine K-27 with two liquid metal cooled reactors was scheduled to participate in Naval exercises although it was known that the coolant needed cleaning.

The coolant failed and the unit overheated releasing radioactivity in the submarine.  It was able to limp back home on one reactor but was found to be unrepairable and intentionally sunk in Stepovogo Bay at Novaya Zemlya in 1981.

According to johnstonarchive.net, when the K-11 submarine was being refueled at Severodvinsk in December of 1965 one of the two pressurized water reactors which used twenty percent enriched uranium for fuel wasn’t correctly secured.

The lid had to be repositioned after it was locked and after it was opened too far it began to leak radioactive steam.  Personnel were evacuated but the cause was never identified leading the vessel to be put back into service the next day.

This time the reactor overheated, blew the lid into the reactor tank and a fire started.  Seven men were injured and both reactors were dumped into Abrosimova Bay.