To break a world record, you have to be committed. Everyone knows that. But to keep trying and trying, attempt after attempt, takes something else. At the beginning of 2017, Steve Abraham announced that his is starting his third attempt to break the record for the most miles cycled in a year. Again.

The record, which comes with the catchy acronym UMCA HAMR or Ultra Marathon Cycling Association’s Highest Annual Mileage Record, currently stands at 76,076 miles. Steve Abraham has been chasing it for four years now. He holds the record for the most miles cycled in a month. He is top in his age group for most miles cycled in a year.

But that is not enough – he wants the world record.

His attempts have been dogged with injury and competition. Abraham set out in 2015 to beat Tommy Godwin’s long-standing world record of 75,065 miles in one year. The record was set in 1939 and, after 76 years, it was in need of someone breaking it. Abraham set out a tough schedule which, if completed, would leave him at 82,835 miles at the end of day 365. Sadly, it wasn’t to be.

At the end of March 2015, Abraham was hit by a moped. It was around 8 o’clock in the morning and the driver wasn’t paying attention to the road. After the collision, Abraham carried on riding, but cut short for the day and went to visit a hospital. The crash had left him with two fractured bones in his ankle.

Most people would have given up at this point, but not this man. Unable to let go of the record attempt, in spite of his injury, he continued cycling on a closed circuit track with a recumbent bicycle. The recumbent bicycle allowed him to ride one-legged without losing balance, while his ankle recovered. As soon as he was able to pedal again properly, he was back on the road.

During the year, counted from the start of his record attempt, Abraham still managed to clock up the fourth highest ever mileage cycled in a year. It was an incredible achievement. But it wasn’t good enough.
After his injury, he restarted the record attempt (so essentially riding two attempts in one go, starting January and August 2015 respectively) but eventually gave up. He could tell that the title was slipping away from him and he needed time to recover properly.

To rub salt into the wound, fellow cyclist Kurt Searvogel beat Tommy Godwin’s record in January 2016 – about the time when Abraham finally gave in. The new record now stands at 76,076 miles and Abraham’s challenge just got 1000 miles longer. Not that it phased him.

Now he’s trying again and maybe, just maybe, he will succeed. He takes a very philosophical view of his previous tribulations, looking at the things he did achieve in the previous few years. It’s not many people who can say that cycling 63,609 miles in a year was a dry test for another record attempt. But that’s just the kind of guy Abraham seems to be. He can also happily say that there is only one other person alive who has cycled further than him in a one year period.

Will this year be the year? Perhaps.

As of a few days ago, the bar has been set even higher. Amanda Coker just beat both the women’s and men’s record. In fact she absolutely smashed them. She cycled 86,500 miles in a year and left everyone else gaping. The previous women’s record (the one she set out to beat) was only 29,603 miles. Ooops.

Steve Abraham is only three months into his record attempt at time of writing. His monthly distance graph on Strava looks comparable to Amanda Coker’s when she started out. Only time will tell if he can beat her. 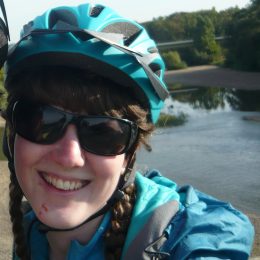 Emily Woodhouse is a freelance outdoors writer, with a love for adventure and inspiring others. Her obsession with mountains probably started in Yosemite, aged about 2. Born in the US but now based in the UK, she enjoys traveling in Europe and camping under the stars. Follow on Twitter: @TravellingLine