What Cowboys Carried in the Old West to Help Them Survive

In our today’s world, having to implement survival strategies under difficult circumstances is something that we could very well have to do. There have been many times in human history when the struggle for survival has been a part of day-to-day life.

Even the understanding of terms like “struggle to survive” and “dangers of our world” has changed since times past. Today, when we talk about the struggle to survive, we’re often referring to financial difficulties; but that’s not how it has always been. For much of human history, the risk wasn’t of being thrown out of your house but of dying.

One such time in our country’s history was what we know of as the Old West. Countless numbers of people died prematurely during the years of our country’s westward expansion due to a wide variety of reasons. There were many dangers they faced every day through the course of living life and doing business.

One such group was the American cowboys, who worked largely alone facing dangerous semi-wild animals in a dangerous environment mounted on half-broke dangerous horses with the constant risk of attack from rustlers and Indians.

Every time one of these men rode away from the ranch house, it could well have been their last. Yet, that was the work they chose to do; they accepted the risks as a matter of course.

Of course, they did what they could to minimize the risks as well. It’s one thing to ride into danger because it’s your job, but it’s another thing altogether to do so without being prepared for that danger. While they didn’t carry much with them, what they carried was important.

The cowboy depended greatly on his mode of transportation: his horse. Most of these were half-wild, half-broke quarter horses: tough, sturdy beasts that were quick and agile – able to work hard and survive on whatever they could find. While some cowboys carried a bit of grain with them for their horses, that was only enough for a treat and not enough to keep the horse fed.

Without the horse, the cowboy was usually as good as dead. Distances were too vast for them to cover on foot. This is why horse thieves were hung: because stealing a man’s horse was as good as killing him.

While most cowboys weren’t gun-handy like in the movies, guns were a part of their lives. Many of these men were veterans of the Civil War and were about as unlikely to part with their guns as the most ardent supporters of the Second Amendment today. 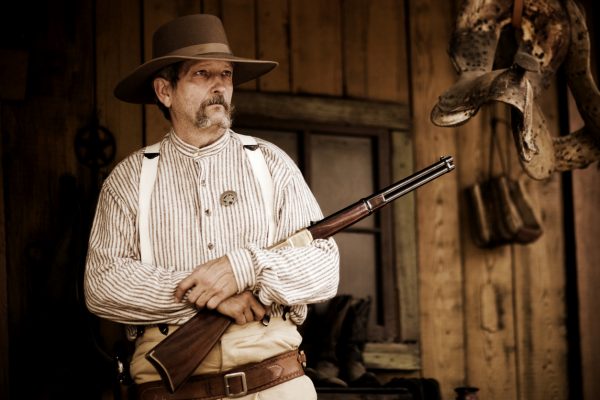 Guns were important for protection. While they weren’t in constant running fights with bandits and Indians, the gun was necessary for protection from wild animals and even the cattle they were working. A stampeding herd was a dangerous thing – able to run a man down and churn him into the ground below. At those times, the only real protection was to kill a couple of animals in front, creating a breastwork to part the approaching animals.

Then, like now, the knife was the most useful of tools. Because they carried very little with them, a good knife was usually their only utensil as well as their only tool. Cowboys often lived off the land, hunting for the meat they would eat on trail drives rather than killing their own cattle. A knife was essential for skinning and butchering those kills.

The ability to start a fire was as important a survival skill to the cowboy as it is to us today, but they didn’t have our fancy fire starters. Rather, they carried a small wooden box containing flint and tinder that they would gather along the way. Often, the flint would have been sewn into a piece of leather to improve their grip on it.

The tinderbox was especially important during wet weather as it wasn’t easy to find dry tinder then. By carrying a tinderbox, they could always start a fire using their knife and the flint to strike a spark. If they were fortunate enough to have matches, they would be carried in the box as well.

In many parts of the west, water holes and rivers are few and far between. A cowboy often had only the water he could carry in his canteen to count on until he reached the next water hole. Most canteens only had a capacity of about 2 ½ quarts, which would have to be enough.

The cowboys would cover them in layers of scrap fabric – to protect the metal from damage and so that they could soak the cover in water and allow the water inside to be cooled by evaporation.

The first thing that any experienced cowboy did when stopping at a water source was to fill his canteen – even before taking a drink. That way, if he had to leave suddenly, he was sure to have water with him. Often, he’d dump out the old water so he could fill it afresh.

It wasn’t uncommon for a cowboy riding out to be alone for a few days at a time while he checked the range. So, he had to carry food with him to eat during that time. What he carried wouldn’t be fancy and there really wouldn’t be much of it, but it would be enough to keep him going. Common foods were:

Cowboys didn’t have our fancy titanium backpacking cooksets. Instead, they made do with whatever they could get their hands on, usually avoiding cast iron in favor of tin as, while not as rugged, tin was lighter and easier to pack into a saddle bag. A typical cooking set would consist of a small saucepan, coffee pot, plate, and cup. That was all they needed for the simple cooking they did on the trail.

Many cowboys carried a fishing line and a couple of hooks. This wasn’t the fancy monofilament line we have today as that didn’t exist back then. By comparison, their fishing gear was crude; but it sufficed to meet their needs and gave them some variety in their diet. For bait, they’d use grasshoppers, worms, grubs, or whatever else they could find.

The rain slicker was an extremely important part of a cowboy’s survival gear. Sudden rains were not uncommon and often appeared with little warning. Getting caught out in the rain without a slicker could be dangerous, especially during cooler weather or as nightfall approached. Hypothermia was a very real risk for them and one they had to take measures to avoid.

The cowboy’s slicker was usually carried rolled up and tied behind their saddle. Sometimes, they would roll it together with a blanket, but even if they weren’t carrying a blanket with them they would usually have their slicker. The blanket might be left in the chuck wagon as part of their bedroll.

Not all cowboys wore chaps, but in some parts of the country, they were a necessity. Different types of chaps were used in different areas depending on the need. In most cases, they served to protect the legs of the cowboy as their horse pushed through thick brush. In the far north, wooly chaps were often used as they provided added insulation against the cold.

While chaps might not be considered a part of their survival gear, they showed how well cowboys adapted their dress and manners to fit the environment they were in rather than fighting against Mother Nature.

Piggin’ strings were the cowboys’ equivalent of paracord. They resembled leather boot laces and were usually cut from whatever scrap pieces of cured hides were available. Originally, they were used to tie the legs of a calf when branding but they quickly became the go-to cordage for anything.

The bandana may be thought of as nothing more than a part of daily attire, but it was an important part of their equipment. Most commonly, it was used to cover the nose and mouth as a filter against dust. It could also be used to strain mud out of water, as a washcloth, and as a bandage. When not in use for anything else, it was tied loosely around the neck to protect from sunburn.

We all know what a cowboy hat looks like, but not all cowboys wore what we recognize today as a traditional cowboy hat. The design we know today evolved over time. In earlier times, or in the case of men who had recently arrived in the west, any hat would do.

The hat was a combination of rain and sun protection – providing shade for the face and insulation from the cold for the top of the head. In Mexico, where the sun is stronger and the heat even worse, the hat evolved into the sombrero, which was literally a piece of portable shade for the wearer.

Then, just as now, a coat was an important piece of survival gear, especially in the winter. No cowboy would ride out away from the home ranch if there was any chance of it getting cold. If they weren’t wearing it, they would tie it behind their saddle along with their slicker.

Gloves were important too, but most cowboys used mittens instead. These provided better insulation for the hand as the fingers could share body heat. There was often a slit cut on the inside of the mitten, allowing the thumb and index finger egress for tasks where dexterity was needed. Work gloves were all but unheard of – not because cowboys disdained them but because they couldn’t afford them.

Tobacco was probably the most important trade item in the west, especially when trading with the Native American Indians. While many cowboys smoked, rolling their own, it was not uncommon for non-smoking cowboys to also carry tobacco to use as a peace sign or for trade.

The last item on our list is the bedroll. This wasn’t actually something carried on the horse as it could weigh more than 100 pounds. It would reside in a cowboy’s suitcase, which contained all his possessions that weren’t carried upon his person. The bedroll started out as a blanket roll but became a place for everything else he carried along. This could include: