Multi-functional survival uses for a CONDOM.

Including CONDOMS in survival kits is not a new idea.  People have been packing them in mini survival kits for as long as I can remember – using them primarily as an expandable WATER CONTAINER.

Don’t worry; I’ll get into details later.  While a little taboo, I’ll ask that you set aside any preconceived notions you might have about condoms.  In this post, I’ll argue that as far as multi-functional survival uses are concerned, the condom offers an incredible BANG for your buck.  Sorry – I couldn’t resist.

I’ll break down the many uses within each CORE SURVIVAL CATEGORY.

As I’ve mentioned, including condoms in survival kits is not a new idea.  They make amazing compact water containers that can hold as much as 2 liters of water if handled properly.  They are, after all, designed to be water tight.  The elasticity of latex condoms is SHOCKING. 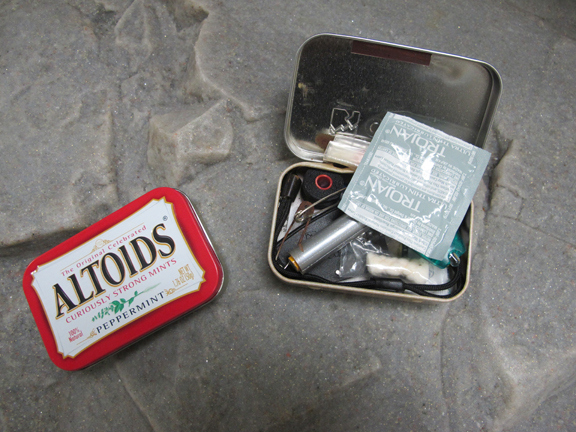 These little suckers will stretch to sizes that will surprise you. Check out how big this one got? 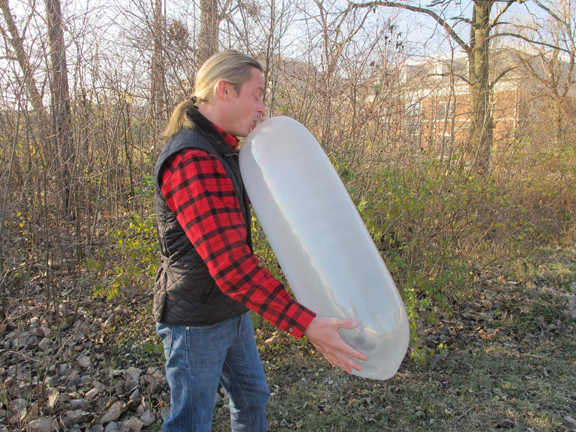 However, while it excels in elasticity, it lacks in durability. The thin latex walls are very susceptible to sharp objects and puncture. Especially when filled with water, the slightest prick (even from a blade of grass) will split it open almost instantly. Then, you’ve lost your water AND your container. No fear – there is a strategy for carrying water in a condom.

The easiest I’ve found it to take off your sock and fill the condom inside of your sock. Not only does the sock provide stability but it also provides protection. It still needs to be coddled like a little baby but it’s not AS delicate. Other options are to wrap it in a t-shirt and even fill it inside a backpack or helmet. It helps to stretch the condom a little bit first – kind of like you do when getting ready to blow up a balloon. Condom balloon animals anyone? 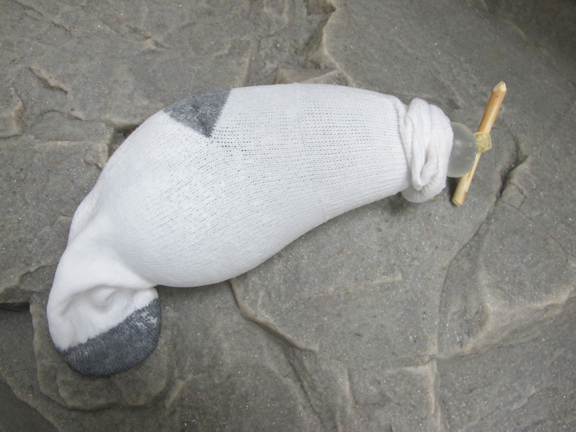 A Condom is easier to fill when water is falling into it versus just sweeping it through the water. In nature, if you can find a little water fall or fast moving water it will make your life a lot easier. Tie the mouth of the condom off around a stick about the diameter of your thumb.

This way, you can fairly easily untie it. Just knotting it off with no stick makes it very difficult to open back up again. You may need to use it over and over again so don’t rush it. 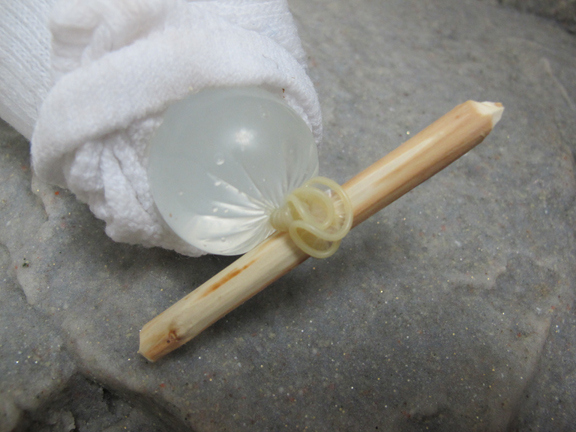 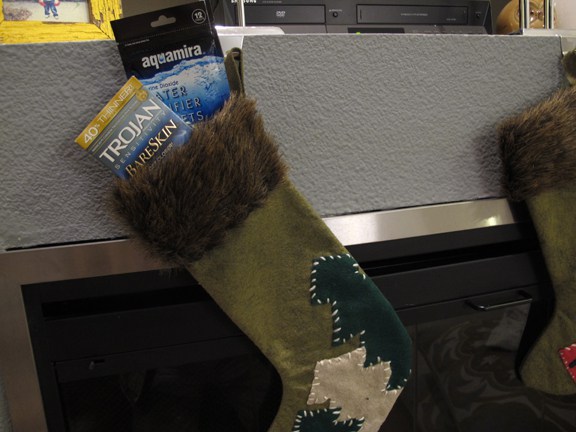 The most obvious way to use a condom to aid in survival fire is to protect DRY fire tinder. Just because the weather is great NOW doesn’t mean it’s going to stay that way.

Finding dry fire tinder in wet and rainy conditions can be very difficult. Protecting dry fire tinder during inclement weather is very easy – when you have a condom. Simply stuff the condom with your best tinder and tuck it away for a rainy day. No rocket science here. 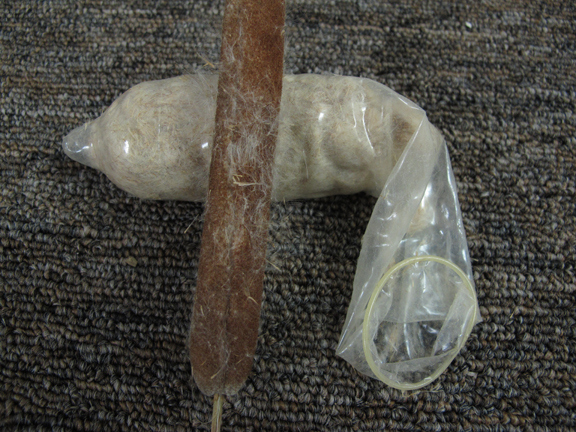 One condom even protects this entire bracket fungus – which contains a load of excellent natural tinder. 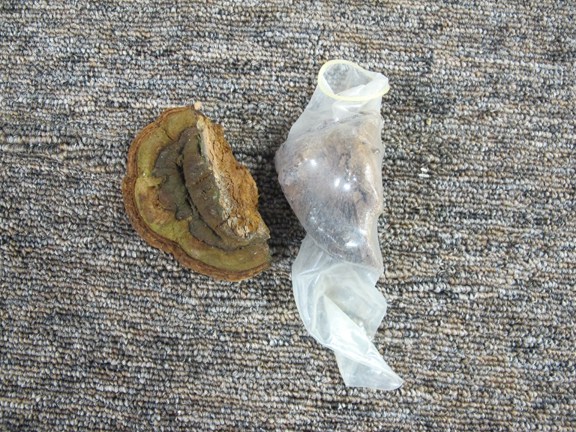 The condom ITSELF also makes excellent fire tinder. With an open flame such as a match or cigarette lighter, a latex condom will ignite almost instantaneously and burn furiously for several minutes – allowing you plenty of time to build your fire. Below is a quick video I shot to demonstrate how well a latex condom burns:

But what if you don’t have an ignition source? Fire requires 3 elements: IGNITION SOURCE (HEAT), FUEL and OXYGEN. If you don’t have matches or a ferro rod, then I guess you can fill the condom with water and use it as a magnifying glass on a sunny day like this guy did:

Anyone ever tried this? It’s fall here in Indiana, and the sun isn’t hot enough this time of year to make it work but you can guarantee next summer I’ll try it.

But, I’m not going to let NO SUN stop me from getting a fire by using a condom, so I resorted to a more primitive method – the thumb loop hand drill. The hand drill is probably the hardest of all primitive fire starting methods. Without practice, it can be very difficult to get the right combination of pressure and spindle speed to generate enough heat to create an ember.

However, thumb loops really help facilitate this process. Thumb loops allow the user to apply more pressure on the spindle and also spin their hands in pretty much one place. Below is a video of how I used condom thumb loops to help generate a coal with a hand drill set.

I also used a handful of condoms as an engine for a traditional Bow Drill Fire Set. Notice in the video below that the condom engine replaces the typical BOW in BOW Drill. I call this the CONDOM DRILL FIRE by FRICTION SET:

Any other ways you can think of to start a fire using a condom?
Like Survival Skills? Consider purchasing my new book, The Unofficial Hunger Games Wilderness Survival Guide, on AMAZON and where all books are sold.

Seriously, how can a condom provide you with survival food? In more ways than you might think actually…
I’m a huge fan of sling shots. I’ve been working on a small game hunting post featuring sling shots for several months, and this was the perfect opportunity to test out an idea I had – the Condom Small Game Hunter Sling Shot. Sounds funny, right?

Condoms aren’t that much different from the latex bands that come stock with most small game hunting sling shots. Remember, your ability to improvise is your most valuable survival skill!
I started my build with a natural tree fork. 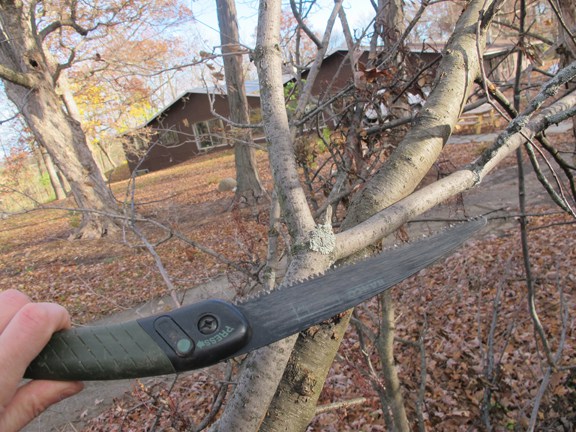 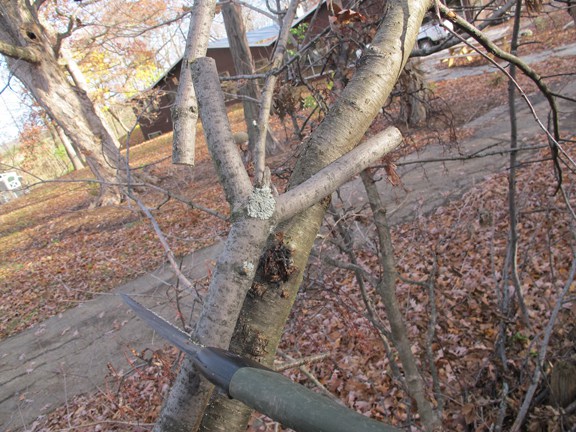 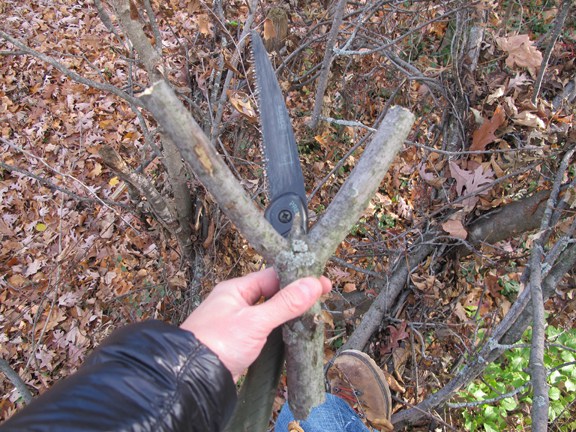 After a little detailing and carving I ended up with a nice little pocket sized Sling Shot Frame. 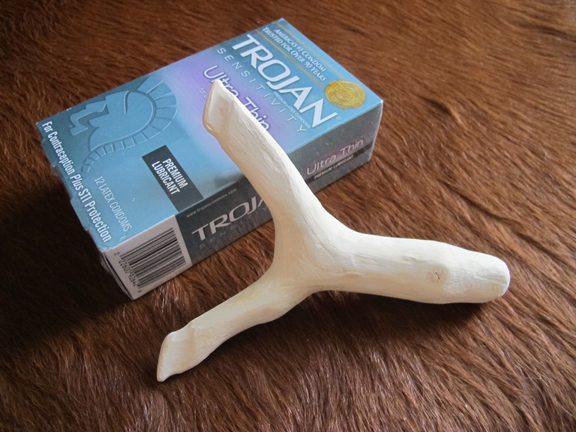 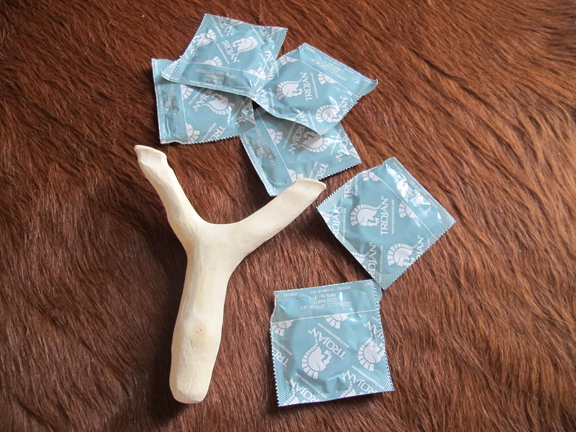 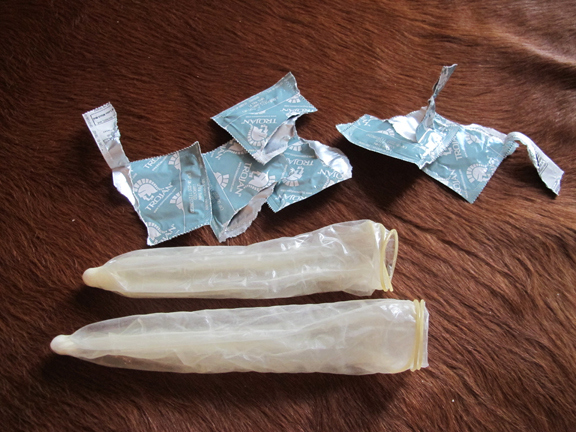 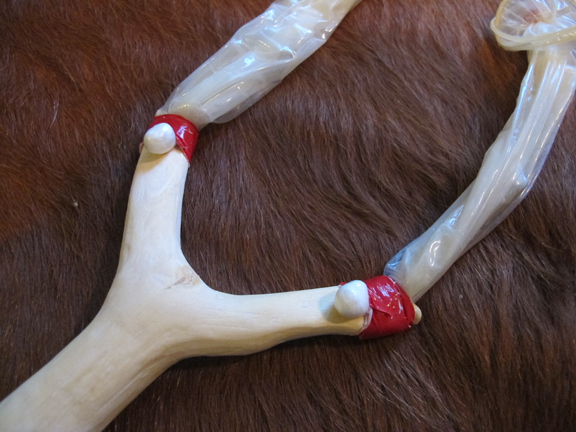 I decided rather than launch imperfect rocks with a leather pouch, I would use a loop of bank line as a anchor point to nock a hand-carved mini dart. I wrapped the other end of the condoms around the loop of bank line and again duct taped it in place. 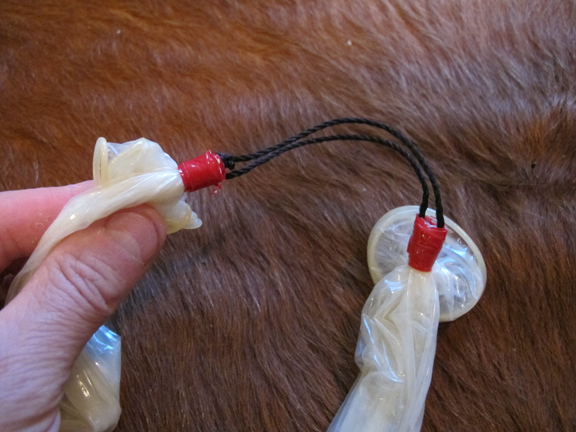 Below is a maple branch I used to carve some of the mini dart projectiles. 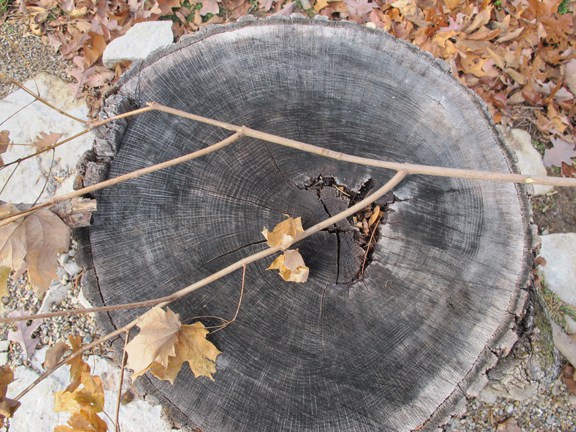 As you can see, some of the darts are tipped with a Honey Locust thorn using Pine Pitch. It’s not necessary, but I’m really digging how deadly these darts look, aren’t you? 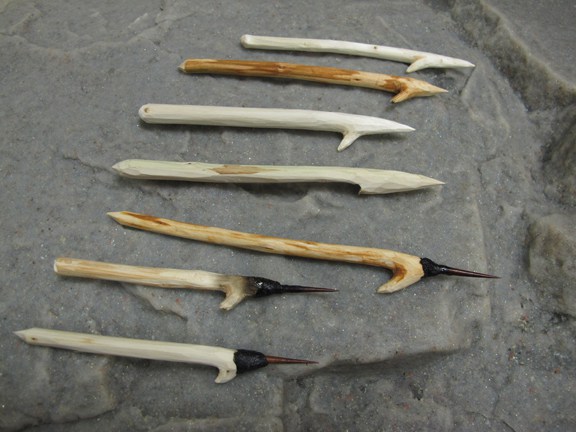 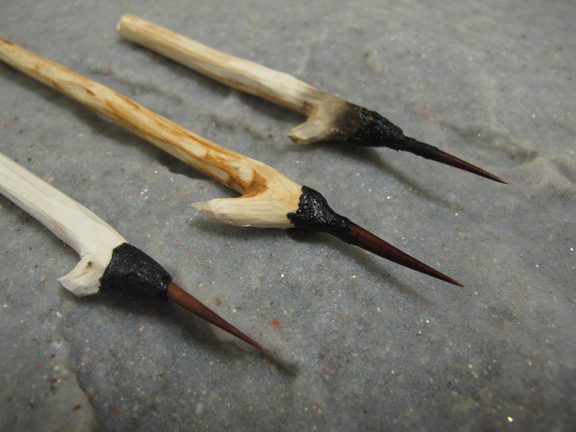 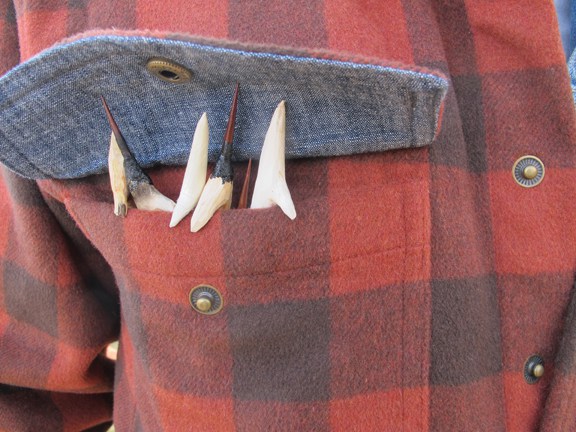 Those are some sick looking little arrows aren’t they? I know what you’re thinking. Cool looking sling-shot, but there’s no way you can actually kill small game with it in a survival scenario. Oh, ye of little faith. 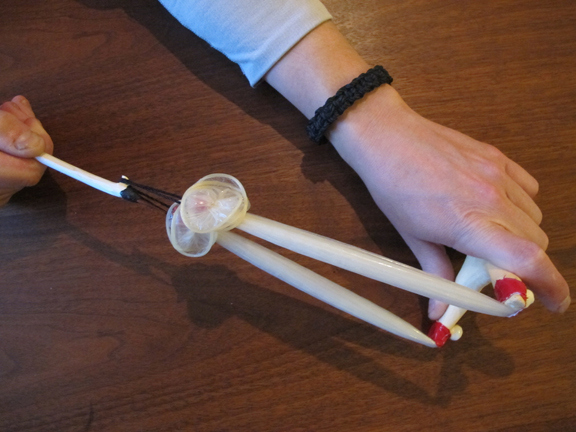 In the 1 minute video below, you can see the condom sling shot in action.

Worse case scenario, a condom can be used as a crude rubber glove while dealing with any first aid related issues. It will protect the wound from your nasty hands as well as protect you from the wound if you’re dealing with someone else. 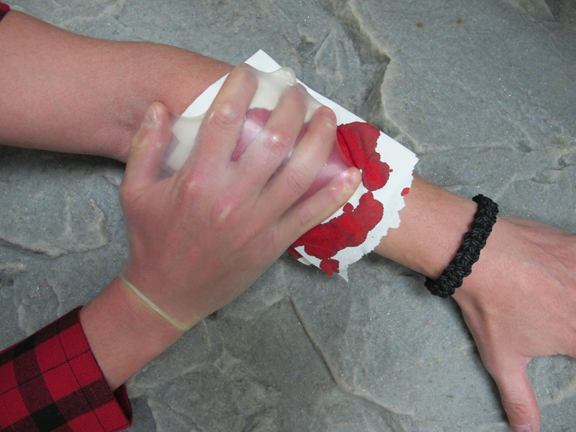 Protect Your Muzzle
I’ve heard 1st hand accounts from soldiers who’ve attended courses at Willow Haven that they used condoms to protect their rifles while serving in the Middle East. They would cover the muzzle of their rifle to prevent sand/mud/water from getting inside – very simple and effective. 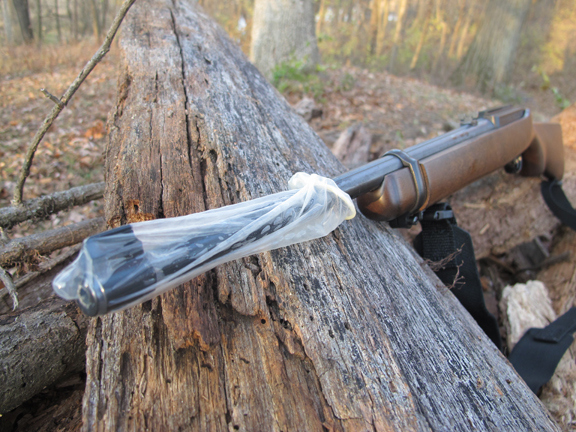 Fishing Bobber
While there are many natural options for a fishing bobber, a make-shift condom bobber is pretty darn effective. I’ve found that rather than just tying off an air bubble in the condom, it works a little better if you stuff in some cattail fluff (called ‘cattail down’) instead.

Cattail down is naturally buoyant and also water-resistant so it’s the perfect bobber filling. Did you know that life-jackets used to be filled with cattail down before synthetic materials were invented? You may need to know that if you ever want to construct a survival life-jacket! The cattail down adds a little weight to prevent your bobber from just blowing around in the wind. 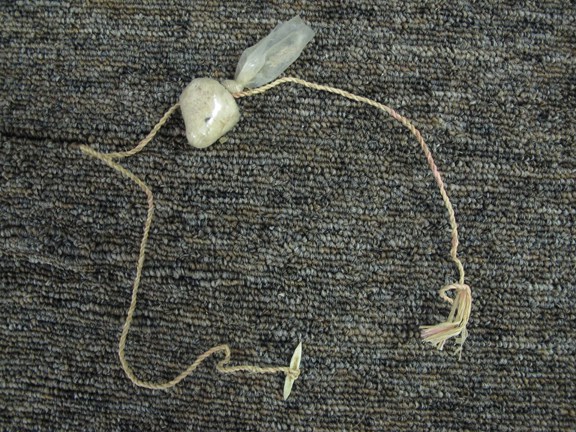 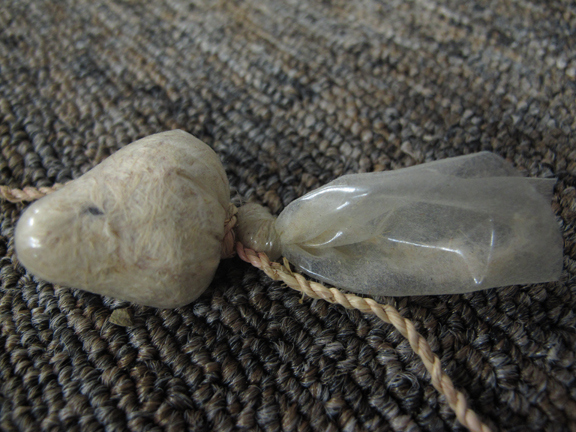 Thanks to Creek of Willow Haven Outdoors for this article

Companionship
Anyone ever seen CAST AWAY with Tom Hanks? Remember his little buddy WILSON? I’ve got a survival companion too. I just call him Lil’ Cody. He debuted in the sling shot video above when I put a mini-arrow through his face. He’ll keep you company when you are alone, starving and freezing in the woods while trying to make a Condom Sling Shot. 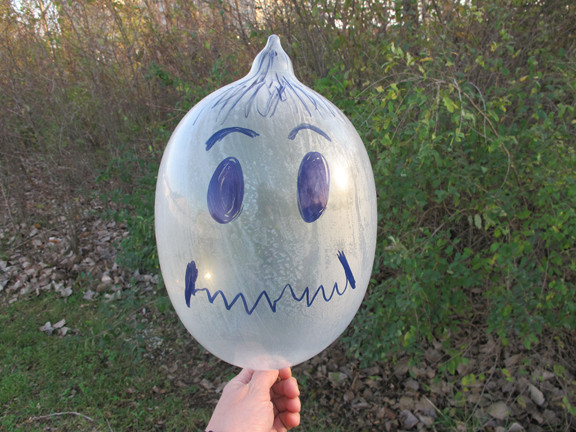 I have to say, I did feel a little pressure to perform when he was watching me carve out the Condom Hand Drill set below. I always do better in front of an audience anyway. I think there’s something to this “WILSON” idea. 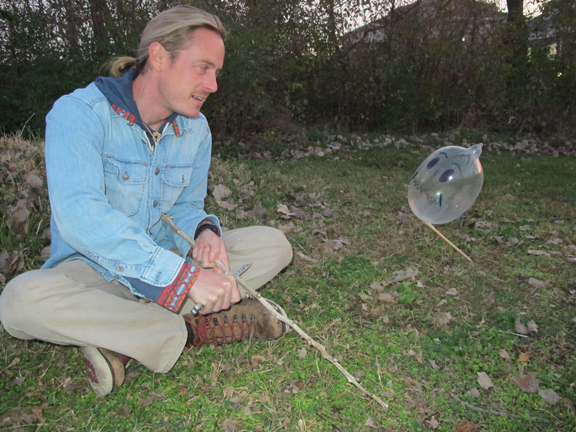