heMountain climbers face many dangers. Many of the mountains have an almost vertical structure, which makes it hard for climbers to reach the peak. During the climb, they need to watch out for sudden avalanches and the weather conditions can deteriorate very quickly, rainfall, snow, winds can all cause serious problems.

A mountain doesn’t have to be the biggest to be dangerous; some smaller mountains have higher fatality rates due to being harder to climb, so even though a mountain might be bigger and higher, it might actually be easier and the safer option.

Here is a list of 7 most dangerous mountains to climb in no particular order:

Mount Everest, also known in Nepal as Sagarmāthā and in China as Chomolungma. It is the highest peak of the world at 29.029 feet. 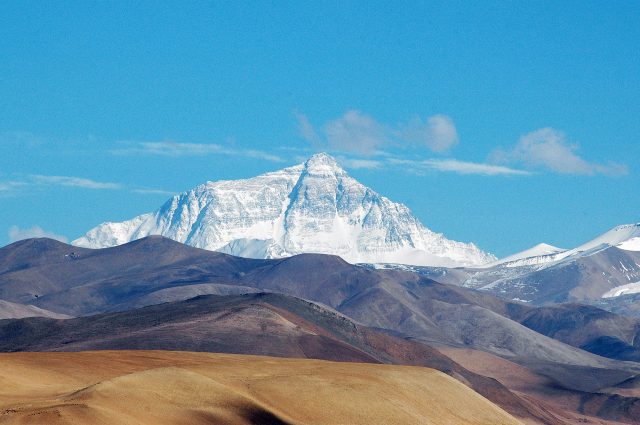 Mount Everest is located on the border of Nepal and China (The border runs over the summit point). It was first climbed by Edmund Hillary and Tenzing Norgay in 1953. It has been considered one of the toughest climbing mountains.

Everest has been climbed by thousands of people but it is difficult to access and it is the highest mountain in the world. One out of every ten people die on Everest making it a dangerous mountain to climb.

Annapurna I Main is the tenth highest mountain in the world at 8,091 meters (26,545 ft) above sea level and is well known for its harsh weather conditions and frequent avalanches. 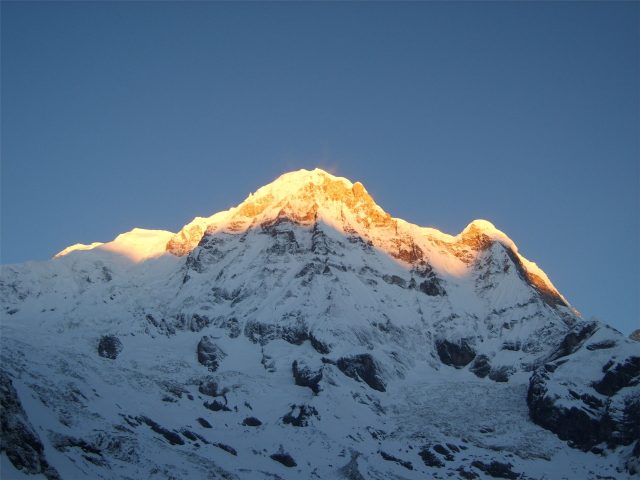 Only about 200 people have successfully climbed Annapurna and for every 10 that try over 30% die.

Nanga Parbat (literally, Naked Mountain) is the ninth highest mountain in the world at 8,126 meters (26,660 ft). Nanga Parbat has the nickname of “Man Eater” because of its difficulty to climb and how many people die attempting it. The mountain was first climbed by Herman Buhl in 1953. Before it was climbed by Buhl, about 30 people died trying to climb the mountain. It has never been climbed during winter because the weather combined with the sheer ice and rock make it impossible, even in the climbing season the mountain still claims at least 2 lives for every 10 people that climb it.

Kangchenjunga, sometimes spelled Kanchenjunga, is the third highest mountain in the world, and lies partly in Nepal and partly in Sikkim, India. It rises with an elevation of 8,586 m (28,169 ft). 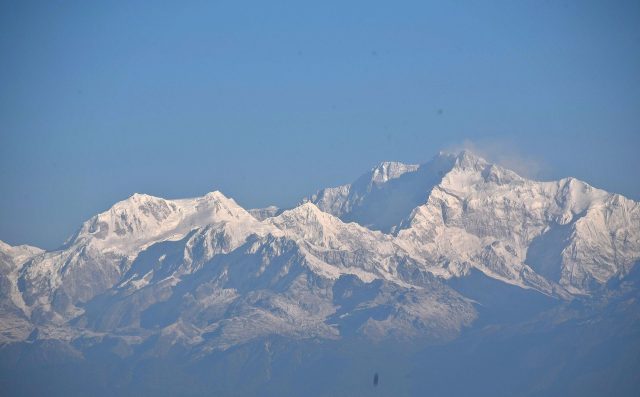 One in five people die attempting to climb Kangchenjunga.

Kangchenjunga was first climbed on 25 May 1955 by Joe Brown and George Band, who were part of a British expedition. They stopped short of the summit as per the promise that was given to the Chogyal that the top of the mountain would remain inviolate. Every climber or climbing group that has reached the summit has followed this tradition.

The Matterhorn, standing on the border of Switzerland and Italy
The Matterhorn is the highest peak in Europe, at 14,692 feet. It was first summited in 1865. 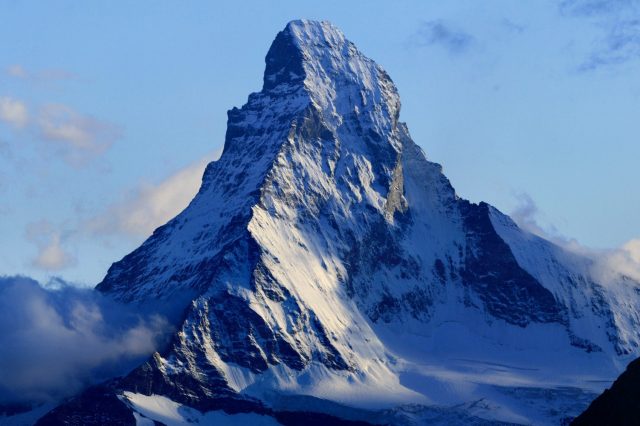 The Matterhorn can be a very technical climb and the weather conditions can be very bad even in the summer, it is sometimes referred to as the Mountain of Mountains

Denali (also known as Mount McKinley, its former official name) is the highest mountain peak in North America, with a summit elevation of 20,310 feet (6,190 m) above sea level. The Koyukon people who inhabit the area around the mountain have referred to the peak as “Denali” for centuries 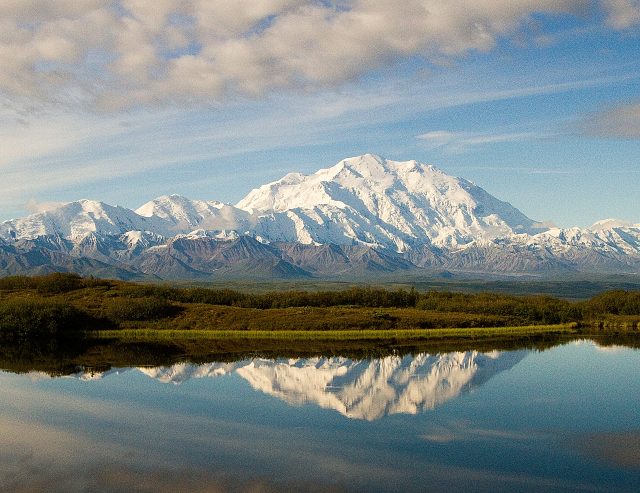 It is the third most prominent and isolated mountain after Mount Everest and Aconcagua. In 1903, James Wickersham recorded the first attempt at climbing Denali, which was unsuccessful. In 1906, Frederick Cook claimed the first ascent, which was later proven to be false. The first verifiable ascent to Denali’s summit was achieved on June 7, 1913, by climbers Hudson Stuck, Harry Karstens, Walter Harper, and Robert Tatum, who went

The first verifiable ascent to Denali’s summit was achieved on June 7, 1913, by climbers Hudson Stuck, Harry Karstens, Walter Harper, and Robert Tatum, who went by the South Summit.

K2, also known as Mount Godwin-Austen or Chhogori.
K2 is the second-highest mountain in the world after Mount Everest. at 8,611 metres (28,251 ft) above sea level. It is located on the China-Pakistan border between Baltistan, Taxkorgan Tajik Autonomous County of Xinjiang, China. With an altitude of 28,251 feet, K2 is known as the Savage Mountain due to the extreme difficulty of ascent and it has never been climbed in the winter. 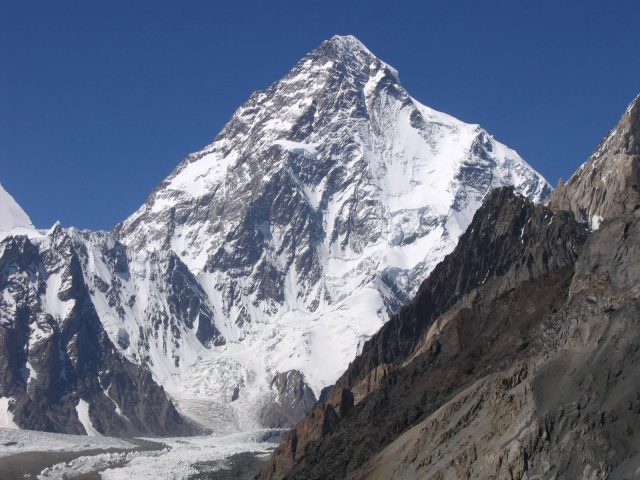 This mountain has a very bad reputation with a high fatality rate. One in every four people that climb K2 die on the mountain.

Just a few hundred people have managed to climb K2. Just getting to the mountain is hard and the weather makes it a particularly hard climb. If anything goes wrong on K2 you need to sort it out yourself as there’s no rescue team on standby.

That rounds up our 7 most dangerous mountains, if you have any mountain experiences or stories we’d love to hear from you over on our Outdoor Revival Facebook page

Stay safe and never attempt any mountains unless you’re prepared both physically and with t right equipment.