How To Deal With Angry Mobs and Protesters

Natural disasters can strike fast and without warning, but so can angry mobs and protesters. It’s great if you’re prepared to evacuate a flashflood, but do you know how to safely get out of an angry mob of protestors that could form quickly?

The reality is that rioting and mobs are more dangerous than you may think, with thousands of individuals being killed in the middle of them on an annual basis across the world. You don’t want to become one of these people, and even if you do unexpectedly find yourself in the middle of an angry mob of rioting protestors, you can use the steps presented in this article to get out of there and protect yourself from harm while you do it.

STEP #1: BE PREPARED FOR THE RIOT

Obviously the best way to be prepared for a riot is to anticipate it so that you can get out of there before it forms. Don’t be fooled by crowds that appear to be calm and tranquil either. In an instant, that crowd can become angry and dangerous, and the hysteria will only spread on a very fast basis.

Another way to prepare yourself for a riot is to know the area so that you will be aware of any escape routes that you can take. Obviously this might not be possible if you’re a tourist and visiting an area for work related purposes or vacation. At the very least, however, you can have a map of the general area with you so that you can more easily locate the escape routes.

STEP #2: BE CALM AND DO NOT BECOME INVOLVED 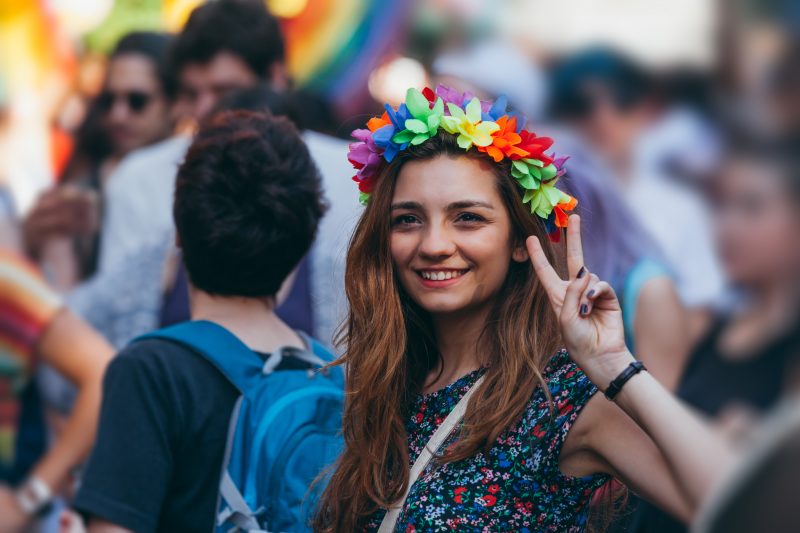 Once the angry mob forms, it’s important for you and everyone with you to be calm. This will be challenging since everyone around you is going to be filled with anger and hysteria and furthermore since your blood will be pumping with adrenaline.

But just remember that remaining clam is the key to thinking through things on a rational basis and getting to safety. Don’t become involved in the protest by taking anyone’s side. Doing so is a recipe for standing out. Instead, take deep breaths, walk and don’t run, and avoid confronting any of the protesters.

STEP #3: KEEP YOUR GROUP TOGETHER

It’s easy to get lost or lose people with you in large crowds. For this reason alone, it is absolutely critical that everyone in your group stay together, and the best way to do that is for everyone to hold hands so you can form a chain that can exit the mob. Check every few seconds to make sure that everyone is with you and that no one has been injured.

In fact, grabbing the hands of those in your group should be one of the first things that you do in a riot, so that you’ll be sticking close together from the get go and you won’t need to spend the first critical minutes searching for people and becoming only more split up.

Your primary goal while being in the middle of an angry mob is to get out of there, and the way out is provided by escape routes. If you already know the area, you should know of at least a few escape routes that will work. If you don’t know the area, you’ll need to check your map or look for a way above the heads of the crowd.

If possible, you will want the escape route to be in the direction of the moving crowd. Moving against the crowd can be dangerous for a number of reasons: it can make you stand out more and possibly lead to a confrontation with someone, the crowd could be moving away from something dangerous meaning that you would be heading for it, and it’s also more likely for you to lose members of your group by walking against the crowd rather than with it.

Once you have selected your escape route, head in that direction and follow Step #5.

STEP #5: MOVE TO THE ESCAPE ROUTES IN A CALM MANNER

Keep everyone together and continue to be calm as you move towards the escape routes. Remember to try and move with the crowd rather than against it. It’s understandable if you may want to run out of there as fast as possible, but if you move slowly and calmly you have a greater chance of not attracting attention or not getting stampeded.

You’ll want to continue to move along with the mob until you can reach a building or another street that leads to safety, and proceed to Step #6.

STEP #6: GET TO A SAFE LOCATION

Even if you reach the escape route and are out of the rioting, you still aren’t out of danger just yet. Once you have reached the escape route, you should then focus on putting distance between yourself and the rioters and getting to a safe location. Angry mobs can continue to swell and grow bigger and bigger, and furthermore multiple mobs can develop at different sections of the city. In other words, even if you escape one mob, there could be another one just a few blocks away.

Since most rioting occurs in the streets, it might be impossible for you to drive out in your car if too many streets have been blocked off either by the rioters or by law enforcement. You may think this means you have to stay out in the open, but in reality you can get indoors to where rioting generally doesn’t happen and you can outlast the rioting.

Once you get inside the building, being sure to select one that is away from the rioting and not a target of the rioters, secure the windows and doors and get away from them. Identify two or three escape routes in the building that you can use should the rioting ever come your way.

Last but certainly not least, avoid more mobs! Get in contact with family members or look up the news to find out the scale of the mob and if any more are forming. You will likely receive text messages telling you dangerous areas of the city, and you should escape those areas at all costs.