Please forgive me being a little hyped about this kinetic piece of joy that recently came my way.

The very best thing about it is this unassuming nub.
I don’t think of it as a stand-your-ground-in-a-back-alley feature. I really don’t.

A flipper to me is simply a convenience, like a Spydie-hole or a thumb-stud.
This little nub and a ball-bearing pivot make the blade magically appear.
My wife says to me, “Is that a switch-blade or something?”
“No,” I explain. “It’s so you don’t have to put down your apple when you open your knife.” 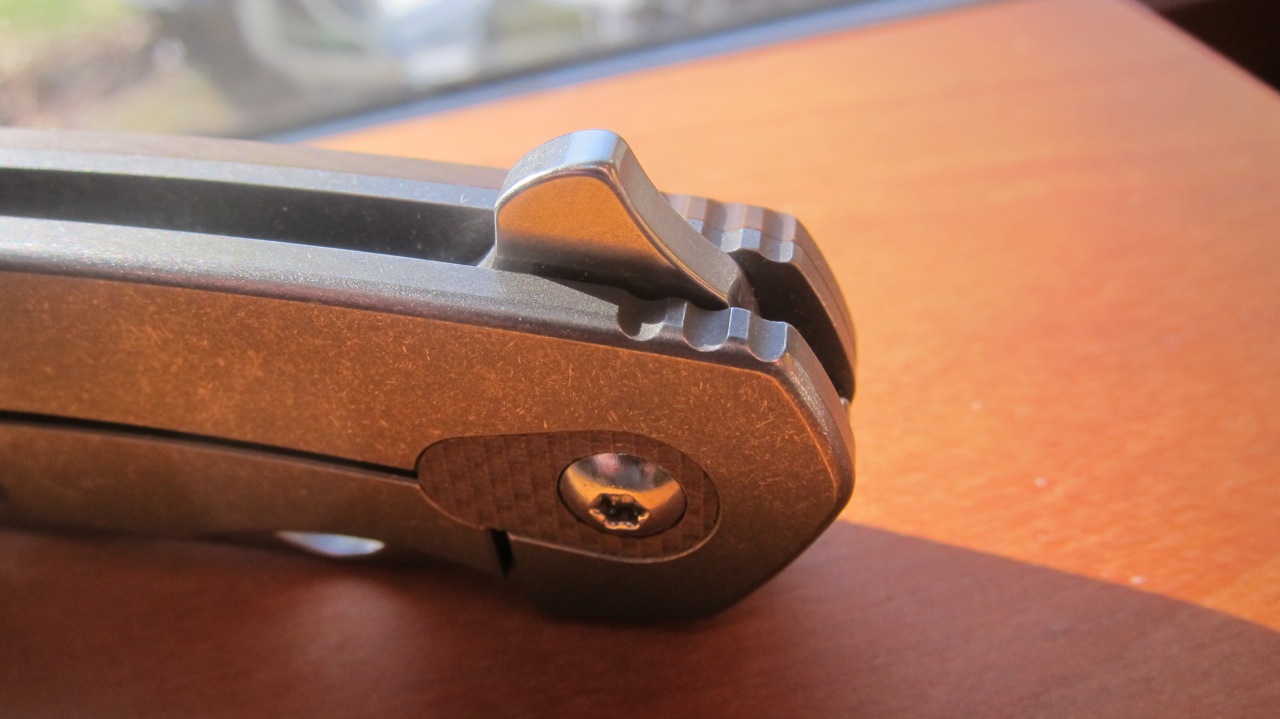 The Reeve Integral Lock locks it up with the authority of, well, a Reeve Integral Lock. Great sound. Rock solid. Take it to the proverbial bank.
It’s got a bit of G-10 as a Hinderer-y overtravel stop. Fine. It looks great. Works like it should. Probably a good idea.
Just curious, though… Anyone here have such steroid-enhanced thumbs that they’ve actually snapped off a frame lock arm?
Anyhow, I like it. 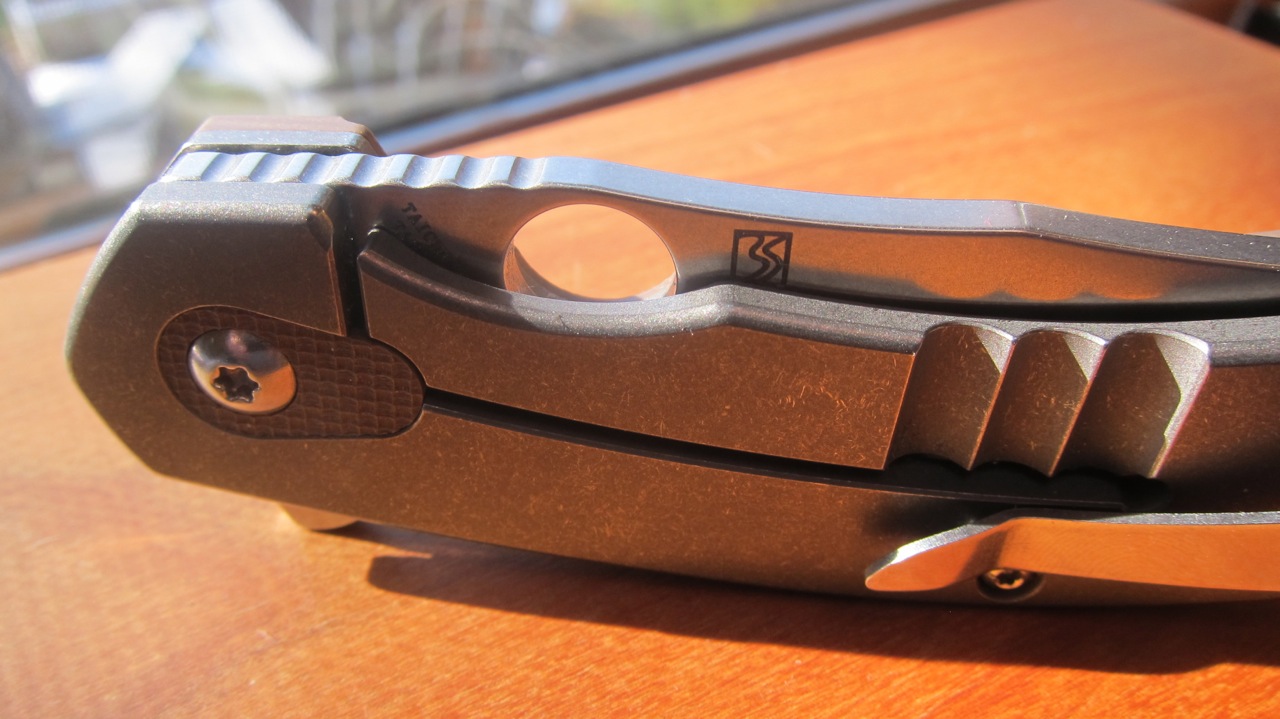 I think this is a very handsome knife. Closed it’s ~4.5 inches. The titanium side offers plenty of design interest with the stainless clip and screws and the brown G-10 inlay.
I’ve seen some mods out there for guys that wanted a dull/stonewashed look on the clip, but I like its surface just the way it is. 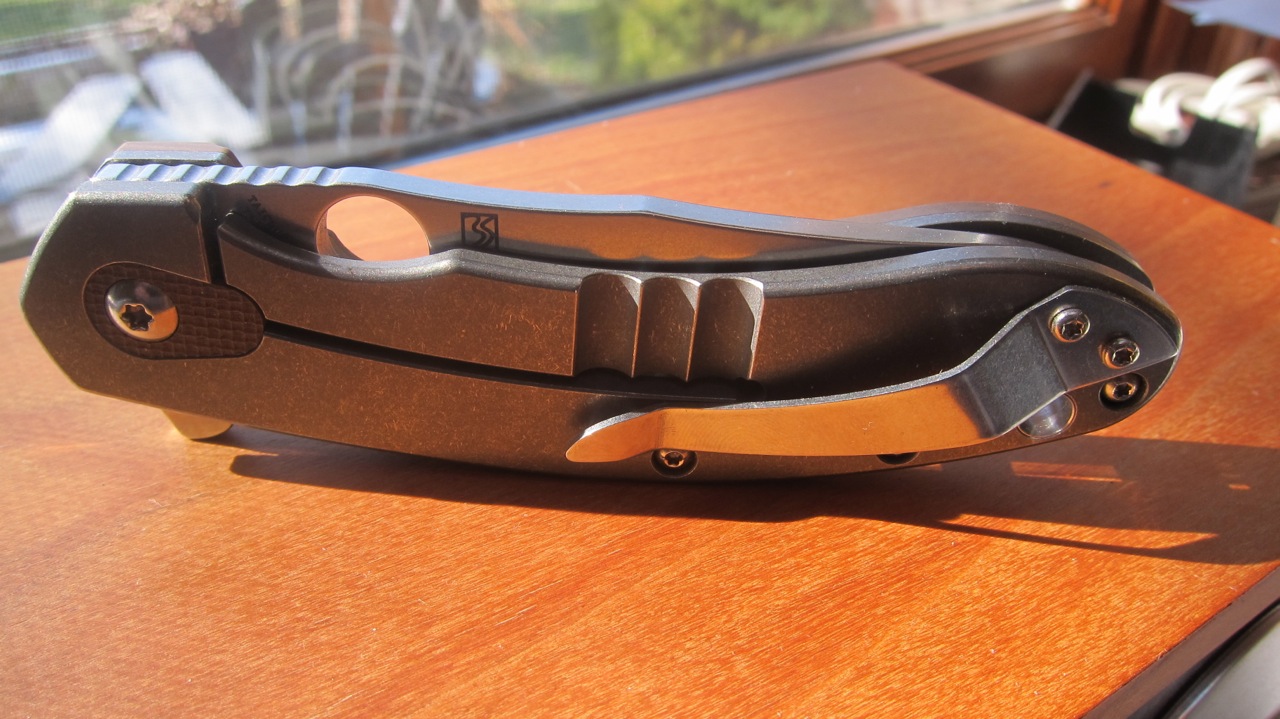 I don’t know what they call this milk-chocolatey G-10 color, but it’s identical to what I’ve got on my Nilakka. When I ordered this thing, I figured I’d be re-scaling it with something sexier. Now that I’ve got it in hand, I’m quite digging the scale as-is. Great grippy texture, and once you settle into it, a very clever surface pattern. I know this is a non-sequitur, but it’s prettier than it looks. And the edge detailing is immaculate. 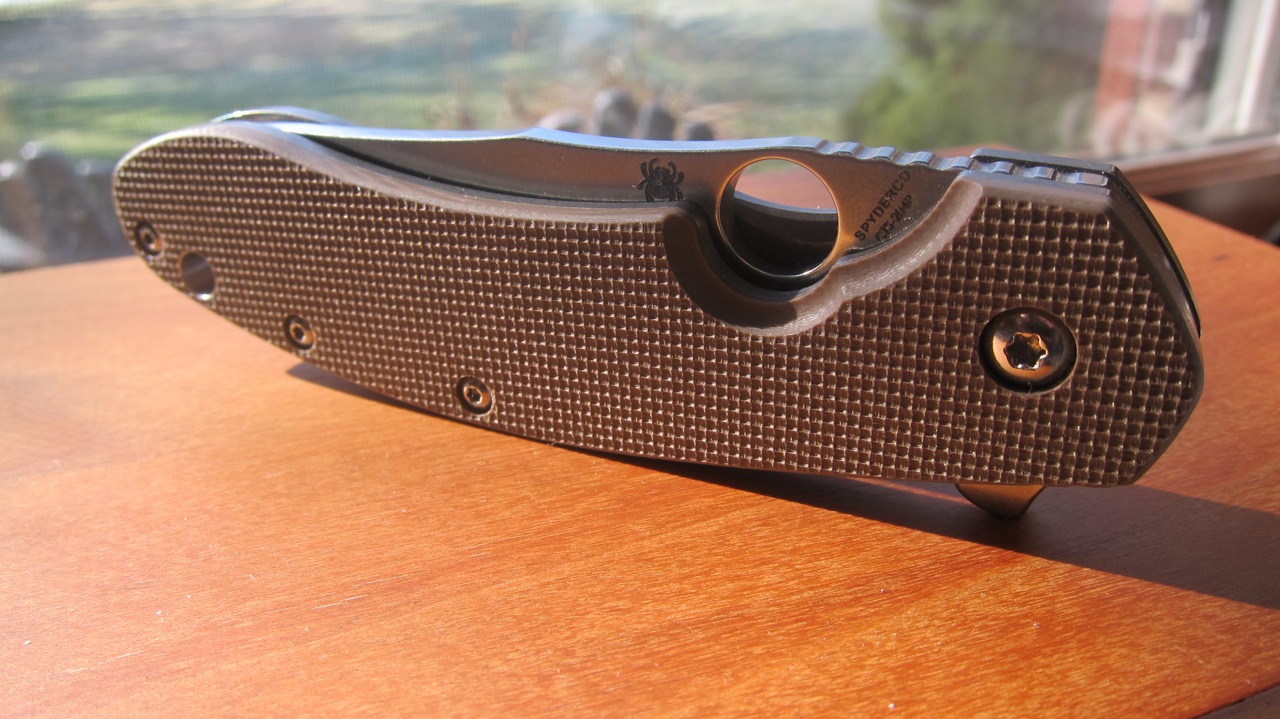 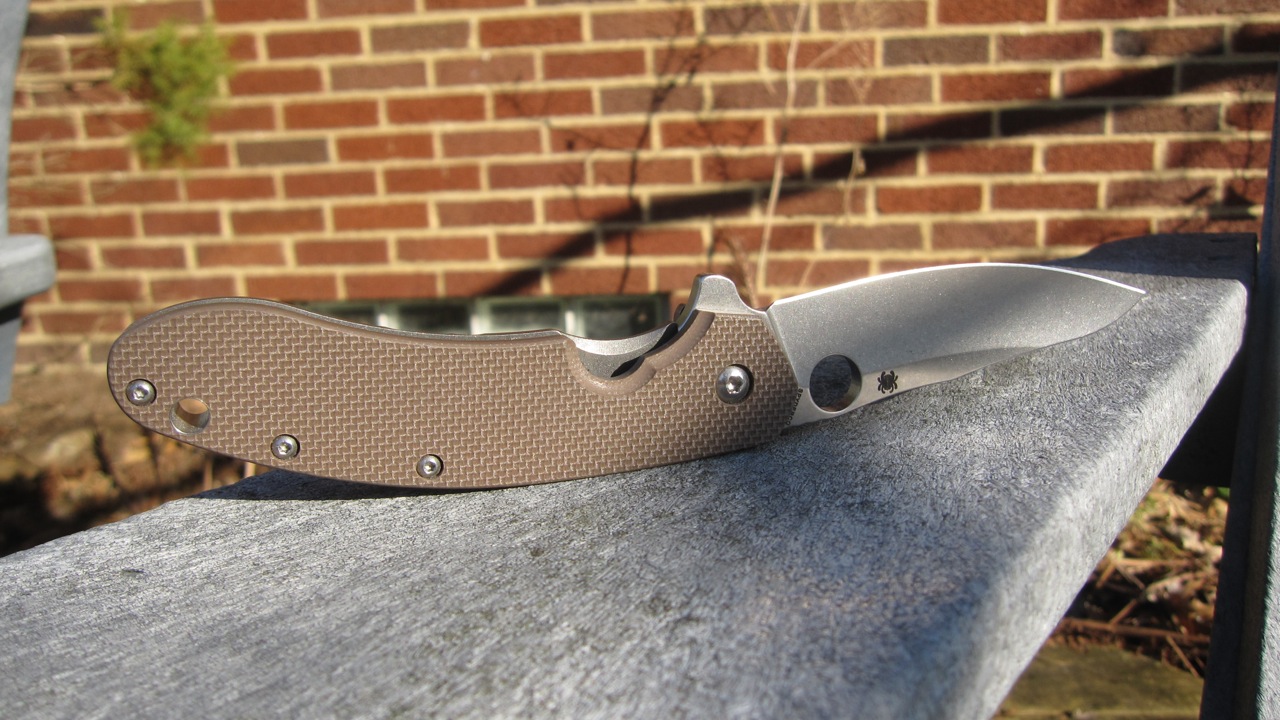 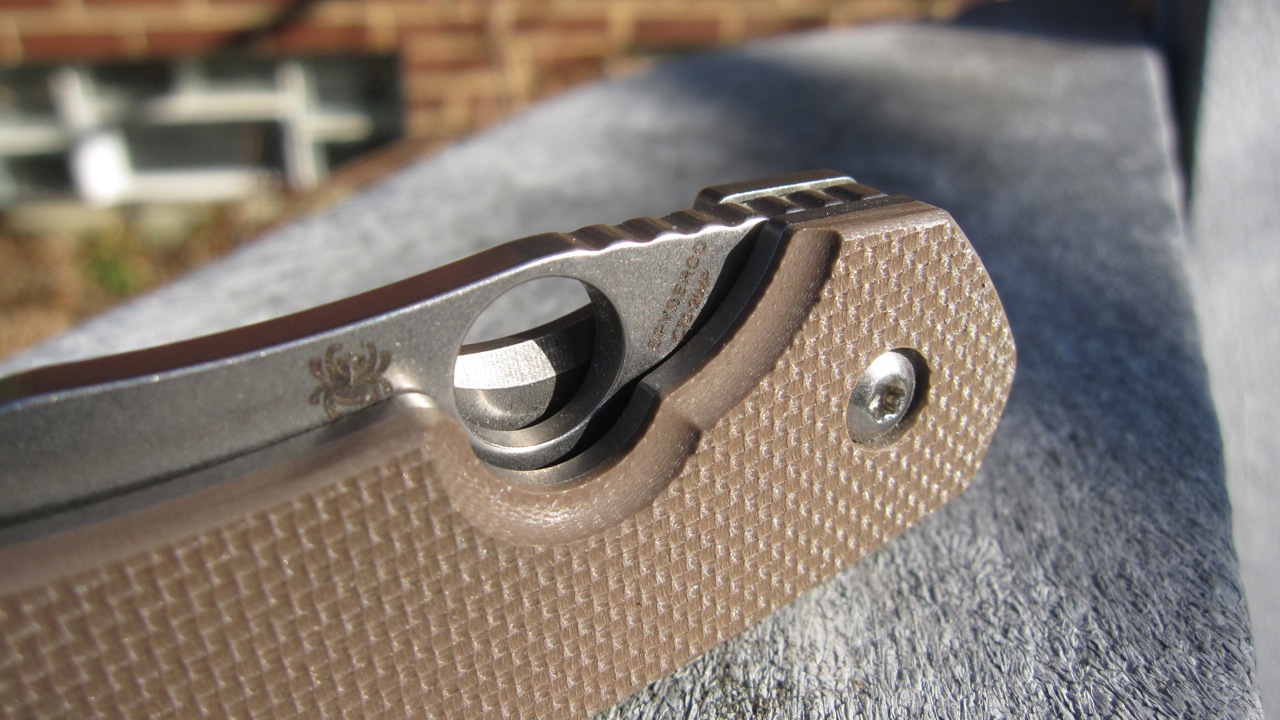 Here’s the obligatory, boring part of the show… Everything is precisely centered, of course it is, It’s out of the Taichung facility, and that’s how they do it. Perfect. 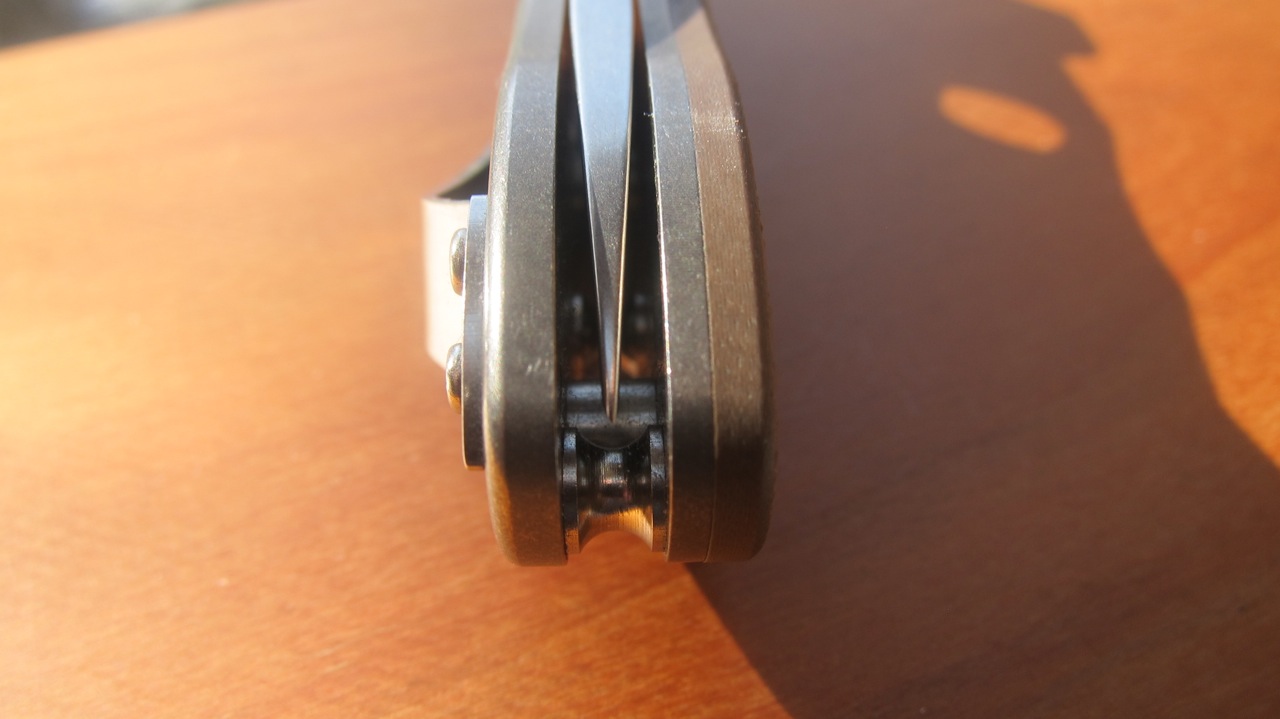 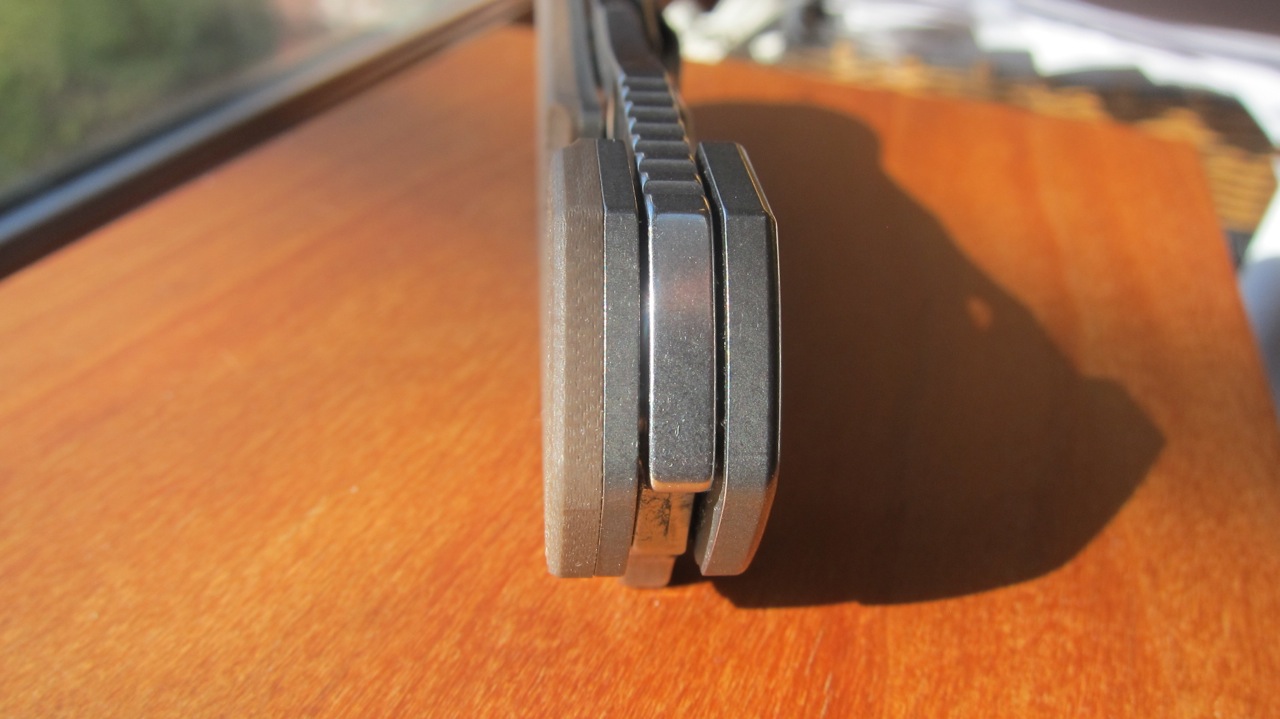 The blade just seems to be a tough son-of-a-gun. Carpenter CTS 204P. I say that like I know what it means. I don’t. But from listening to folks that know better, and from my presumptions about Spyderco and Taichung at this price point; I’ll take it on faith that this is some good steel.

My experience with the Carpenter XHP on the Techno has been stellar: holds an edge, sharpens right up, takes a licking and keeps on ticking. I’m counting on similar performance here. The blade image here shows a lovely toothy edge. Make no mistake; it cuts like a scalpel. (I found that out the hard way.)

The Southard icon on one side and the Spyder on the other give me a fuzzy feeling. 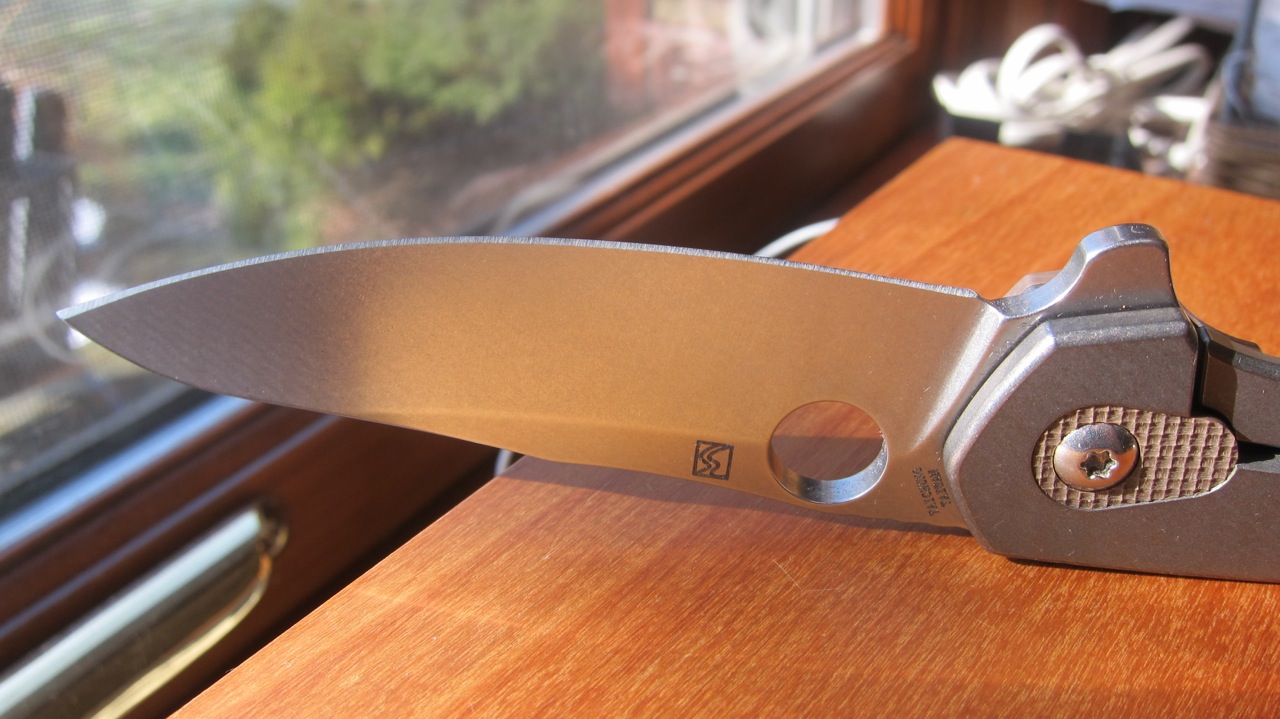 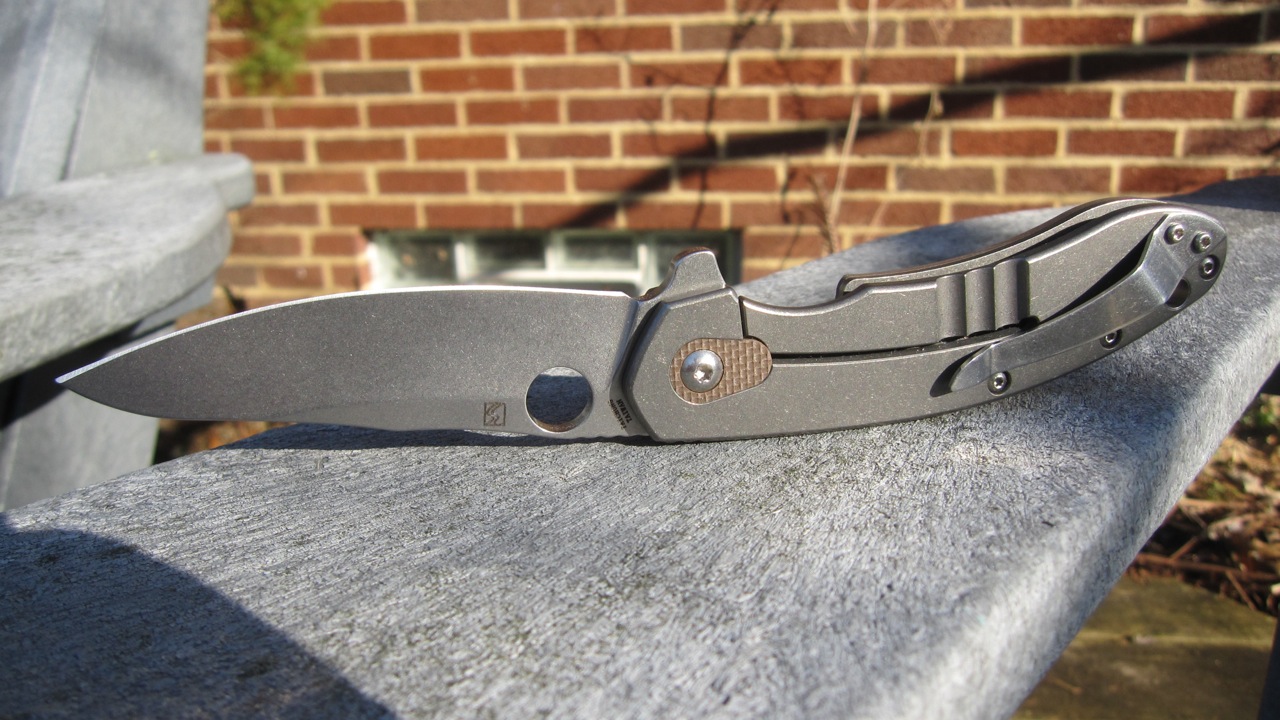 There’s been a bit of hand-wringing on forums, over the pointy end of the pocket clip. Eh. It’s a legitimate gripe.
I’m sure I’ll be giving it a little rounding off on the grinder, but it’s no big deal. And as I said before, I dig the bright finish as a counterpoint to the gritty titanium.
See the shiny backspacers? Nice. 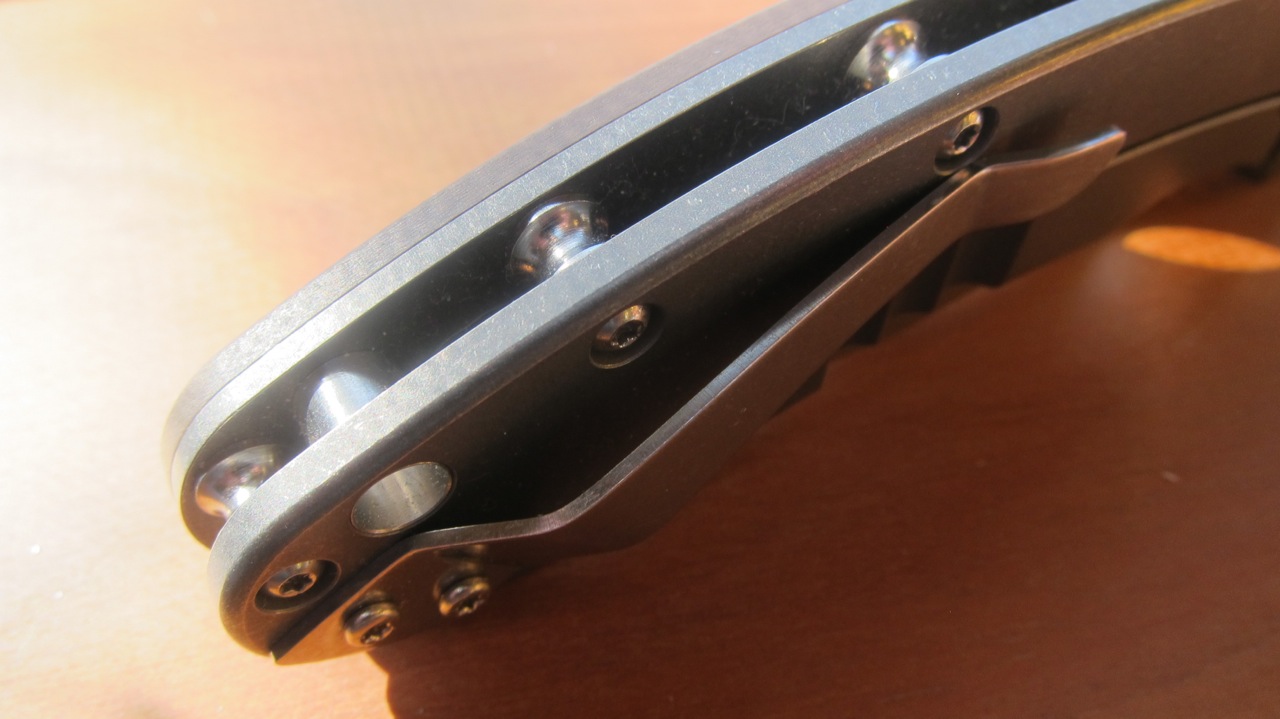 It’s large. But I’d be perfectly comfortable throwing it in a jeans pocket, even sans clip. I’m kind of thinking about that.
Big as a Buck? Just about, but lots lighter. 6.5 oz. for the 110, and 4.1 for the Southard.
Bigger than my stalwart work knife, the Native 5. But the Southard is lighter. The Native is 4.5 oz.
The Southard is pretty much the same size as its opposite number, the Nilakka. Oddly, the more delicate Nilakka is substantially heavier, at 5 oz. even.
As I said before, the Nilakka and the Southard are a perfect yin-yang brace. A study in contrasting style and intent, those two. 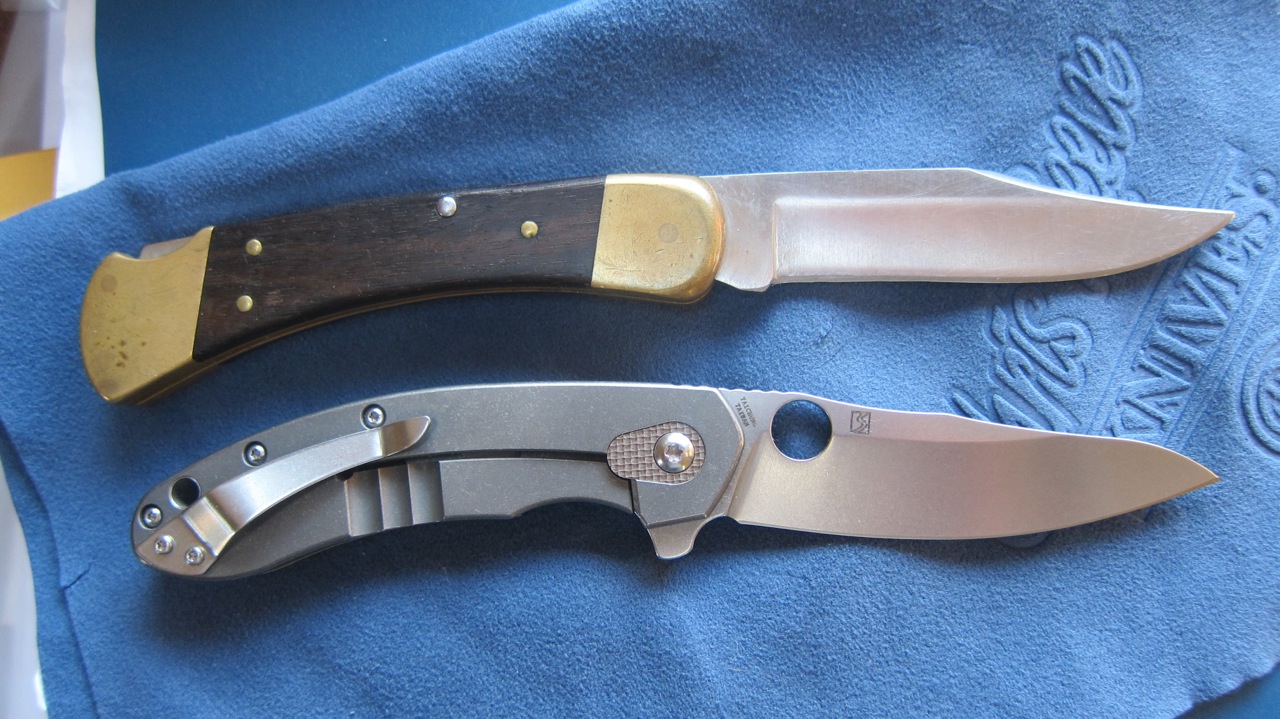 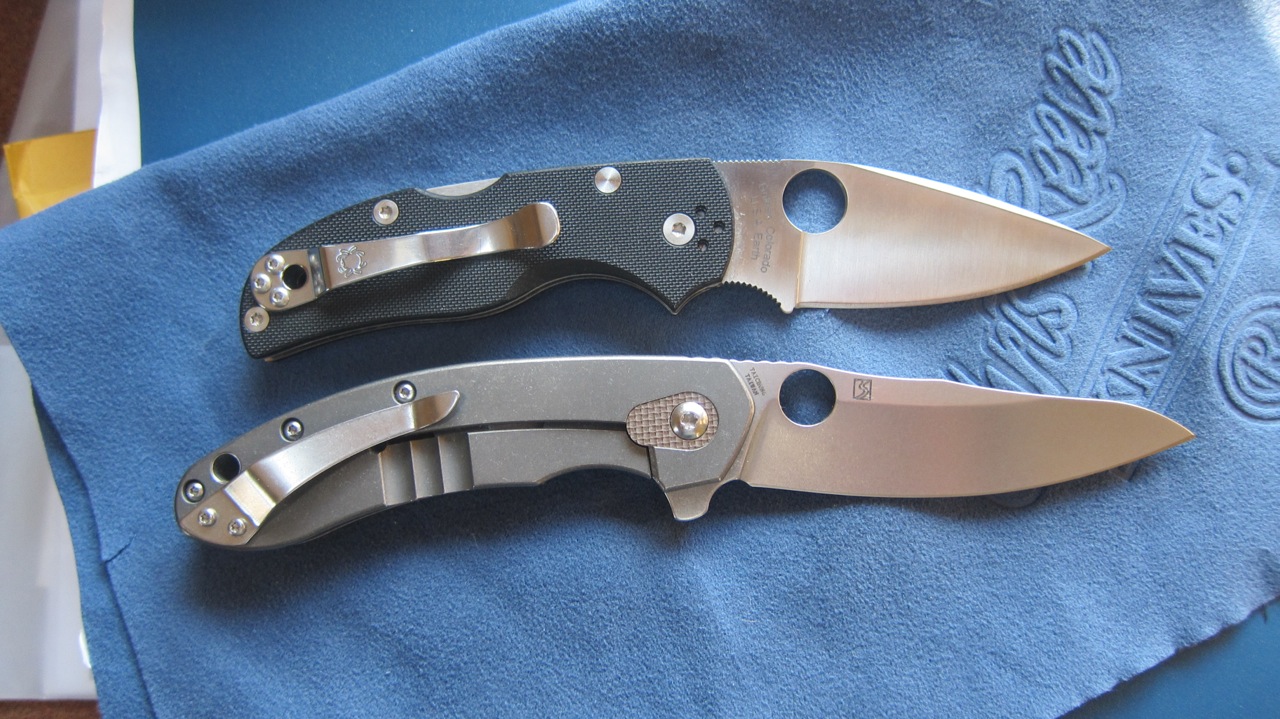 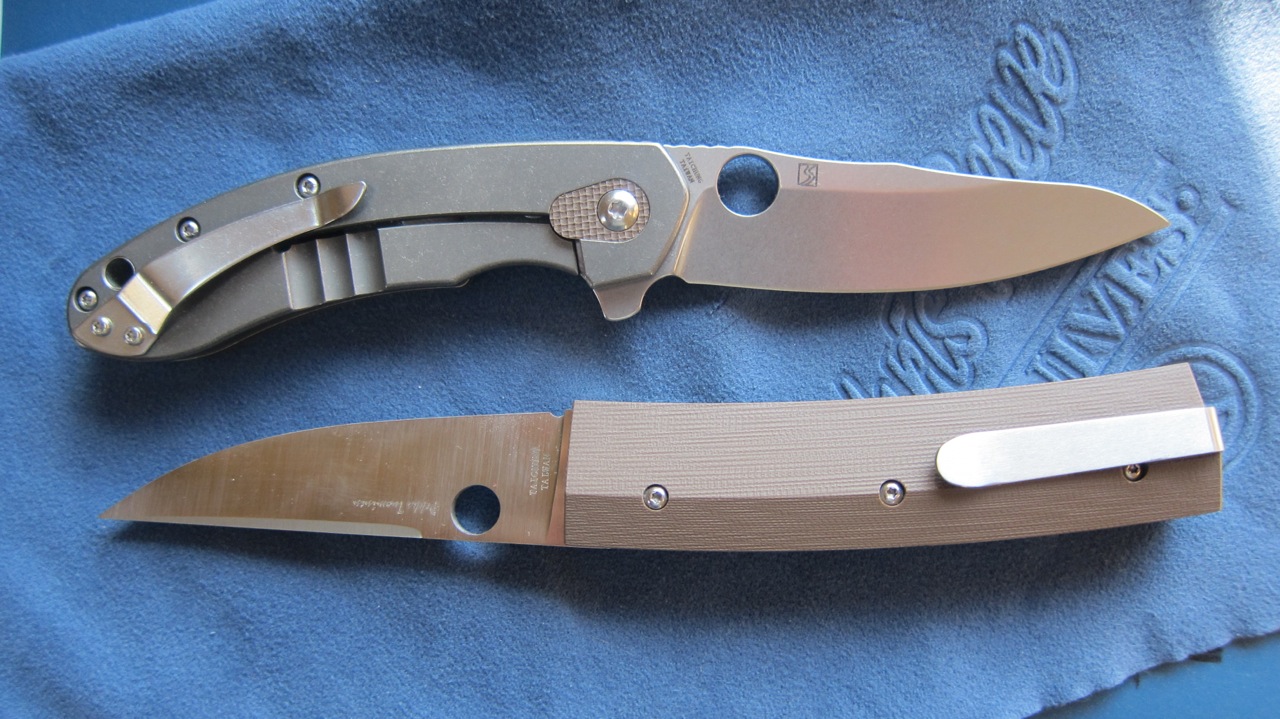 Thanks for looking and listening.
Do I like it? Yeah. Very much.

We love this sort of thing on Outdoor Revival and we’ll be bringing you a lot more of it over the coming months, if you enjoy talking, writing and reviewing your outdoor kit let us know about it on our FB page, we’re also happy for article or review submissions, we’d love to hear from you.