Off Grid Living In New Zealand – Living The Dream

As the Outdoor Revival Editor, I’m often on the lookout for people who are getting out into the wilderness or breaking away from the humdrum of busy lives to live more self-reliant existence.

I’ve been reading some of Bryan Richie’s blog GoneBush.org and thought that some of you would be interested as well as he’s kindly agreed to share it with us here on Outdoor Revival.

I’ve combined the first few entries in this article and we’ll publish more over the next months.

I had a love hate relationship with weekends.

I dreamed of them through the working week.

But when the weekend finally arrived, its existence was tenuous.

A vapor that was rapidly evaporated by the scorching sun of the working week.

Sunday was the worst. I grasped at its supposed freedom, knowing full well that the steely confines of the hamster wheel were waiting for its willing victim on Monday.

And the working week would swallow me whole again.

I used to read with envy the stories of those who were bold (crazy)? enough, to cast caution to the winds and embrace the uncertainty of living a life doing the things that they loved to do.

But that was a life for other people. Lucky people. Those with a situation that was different to mine.

I could never be them.

And so it was for nearly 40 years.

We finally escaped three years ago.

My blog will be about how we escaped and how we continue to escape.

The hamster wheel is eternally patient.

Its victims often return to its steely embrace.

We started watching online videos and reading blogs of people who had bitten the bullet and hit the road – throwing caution to the wind.

Either way, the thought was very scary. We both had good secure jobs, annual holidays, and a nice home that we rented in New Plymouth.

Not rich, but not poor either.

While Sue kept working for Pathways in New Plymouth, I went back to Pest Control up by Te Kauwhata with an old acquaintance. Things did not go well as it turned out. But I’m still glad that it was a catalyst for change. More of that later (perhaps).

At the time I was living in a very small camper van, then we saw this truck come up on Trademe. 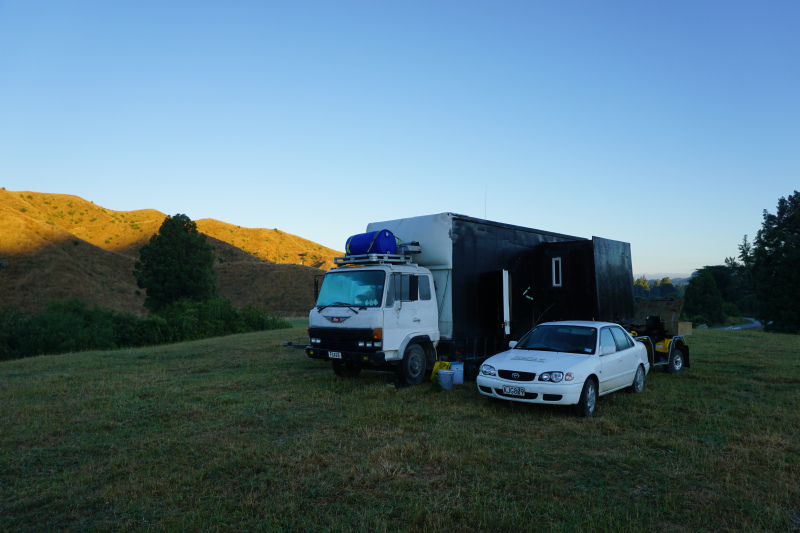 It was owned by a fellow named Dean who had built the pop out and had been living in the truck for a number of years.

Dean is a man who likes to be careful with his money and the truck reflected this. But we were very taken with it. Alas, before we knew it, someone else had bought it. 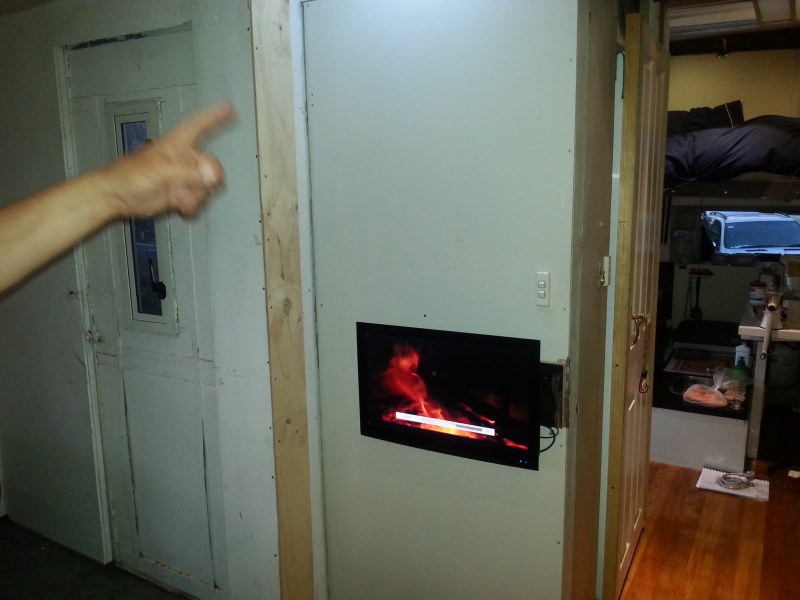 I was disappointed, but am also a Christian, so just thought, “Ah well”.

Continue reading on next page

But two weeks later it was back on Trademe again. This time with a much lower price tag. Things with potential need people with imagination. And despite my many failings, that is one thing that I have.

So after meeting Dean, we negotiated a price and became the proud (and somewhat nervous owners) of a 1989 HINO FD1017

Well, as it turned out, the roof leaked, in several places. The truck had more rust than a Neil Young Album, and it seemed we had a lemon on our hands.

So it was either find some sugar fast or end up with a perceptually sour expression.

We found some sugar. Will talk about it in the next Blog.

In the mean time, here are some photo’s of the truck before we started making her our own.

Just an after thought. There were 3 gas bottles inside the truck. The hose in one had been duct taped up. Apparently, the breezy state of the interior was sufficient to deal with the leaking gas.

Our Tiny House on Wheels

We went from a 5 bay garage and a house filled with stuff, to a house truck with almost no storage in a few short weeks.

Our stuff was gone, it was a very liberating experiencing. We simply said our goodbyes, hopped in the truck and drove off. Wherever we parked was now our home.

I know it is a well worn cliche, but all the stuff that we were now free of, had owned us, not the other way round.

But it has taken some getting used too. It made us feel a little nervous, as if we had somehow broken some golden societal rule. But the reality was we were now freer than we had ever been before.

To tell you the truth I still feel a little guilty when I wake up in the morning and think of the myriads of people that have to get up and face the daily ritual of getting ready for work. That is how ingrained living in the materialistic western world is.

We are basically free. No rent to pay, no power bill, no lawns to mow, no noisy neighbors. Yes we do have bills to pay and we do work. But we are both doing something we love – tramping/hiking and experiencing some of the most astounding scenery you could ever imagine. And we get paid to do it.

In our travels, we get to see some amazing properties. Palatial houses, manicured gardens, flash toys. But almost without exception, the owners are really the owned. The time and effort to upkeep these houses, gardens and gadgets seems to consume all their time.

Tomorrow we are heading of to work in one of the most beautiful places in the Coromandel Peninsula. People work hard all year so they can service all their stuff, and if they are really successful will be able to spend a week or two in their very expensive holiday homes on the Coromandel. Then it will be back to Auckland or wherever to work hard all year so they can do it again.

We are not owned by a flash holiday home, or a huge mortgage. We have all we need, and we don’t want anymore then we now have as we know what will happen.

We will become owned all over again.

Thanks to Bryan and Sue for sharing their lives and their adventures from their Blog Gone Bush based In Newzealand with us here at Outdoor Revival.

Outdoor Revival – Reconnecting us to the Outdoors