So, you have a shelter, now you might need to keep it warm or secure.  In this third part of our series on shelters from James Mandeville, we’re covering Warmth, Security, and building shelters in snow.

We’ve talked about shelters a few times here on Outdoor Revival, mainly because we think they’re an important thing to understand and learn about.  We put up a lot of articles about people that have survived against the odds and often a key reason they’ve survived is because they found or made shelter to protect them.

The stockade is one of the earliest forms of security enclosure built around a shelter or for protecting animals from predators. Before the invention of barbed wire, thorny branches or thorny scrub was used to deter attack by humans and animals.

How to make a thorn stockade 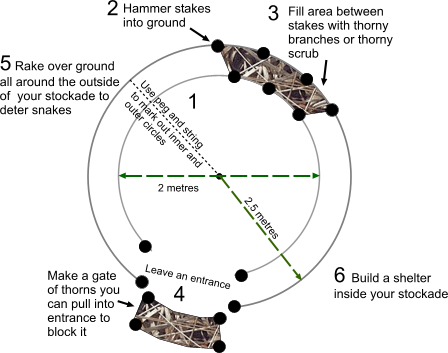 Use a peg and a length of cordage to mark out two circles, one of 2 metres (6.5 feet) diameter and one of 2.5 metres 8 feet diameter. Scale up or down to suit the number of people you need to protect, but remember it is quicker to build two smaller stockades than one very large one, and security is increased if not everyone is housed in one stockade.

It is wiser not sleep in the same stockade used to house animals. If scorpions are present in the area you are building the stockade in, first, cover the whole area of ground with brush wood and burn the ground to kill off any scorpions that are living below the surface soil or grass. Let the fire area burn hot for half an hour and then rake the hot ashes over to spread the heat. (Make sure all the ashes are dead before building the stockade.)

Hammer in posts around the perimeter of both circles and fill the area between them with thorny branches or thorny scrub. This should be tightly packed to prevent smaller animals from passing through any gaps.

Leave a small gap for an entrance and make a gate of compacted thorny branches. To close it, pull it shut with cordage from the inside to plug up the gap. Use a long pole to push it open again.

If you are in an area where snakes could pose a threat, rake the ground over around the outside of your stockade before you close it up for the night. Snakes prefer not to travel over newly disturbed ground.

Finally, build your shelter inside the stockade. This stockade will give you good protection from most small predators, even lion. However, the Masai have tales of lions jumping into a stockade and then you have a fight on your hands in an enclosed area that you cannot easily escape from. If you are in lion country, you need to surround the outer wall of your stockade with pointed stakes hammered into the ground at an angle to give further protection. Lions are more likely to attack a stockade containing livestock than humans — if this is any comfort. A stockade built in this way as a temporary survival technique will not stop larger animals; bears, for example, have been known to tear a stockade apart to get at the people inside.

How to make a snow–hole

To make a snow–hole (snow cave) you dig into a deep, compacted snowdrift (requires about 3 metres 10 feet of deep snow), which you’ll usually find on the lee side of a wind–exposed ridge.

Excavate a hole large enough to lie down comfortably inside it. The construction is very important and means the difference between freezing to death and staying alive. A snow–hole is warmer to live in than any surface shelter, including a tent. It takes time to make, especially if you do not have a shovel and are digging with improvised tools.

The snow–hole (above photo) was dug in the Grampian Mountains in February. Although you cannot tell the scale from the photo (we were more interested in getting under cover than in taking photos) it was large enough to accommodate four people and took five hours to dig out. We sheltered in it for three days to ride out a bad storm. It was a very cold and unpleasant but safer than ploughing through a blizzard driven by winds reaching 40 mph (18 m/s). An occasion when survival knowledge was vital.

Inglis and Doole’s story
In 1982, Mark Inglis and Phil Doole were high up the slopes of New Zealand\’s highest mountain, Aoraki Mt. Cook, when a blizzard hit. They built an ice cave and waited for the storm to pass, but it would be 13 days before help could reach them. They survived on meagre rations, but in the cramped cave they lost circulation in their legs, which had to be amputated.

This has not stopped the men’s climbing careers. Both have gone on to summit Mt. Cook, and in 2006, Inglis became the first double amputee to conquer Mt Everest, losing five fingertips and more flesh off his legs to frostbite, though none of his strength of character. He told the New Zealand Herald, ‘When you lose your legs when you’re 23… something like this is just a minor hiccup, just a bump in the journey, really.

Step 2. Excavate a dome–shaped room by digging into the drift in all directions, starting 1 metre (3.3 feet) beyond the tunnel entrance. 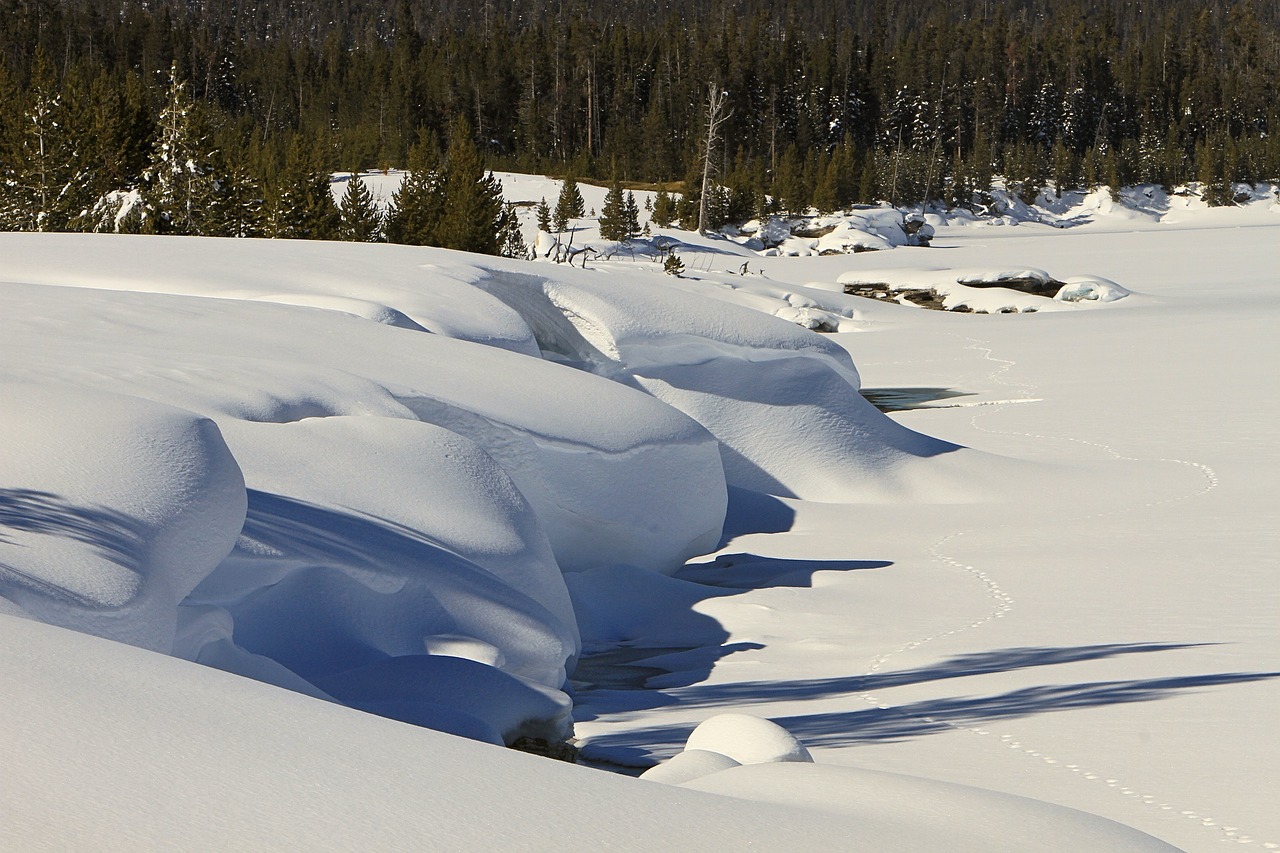 Step 3. Build a platform 1 metre (3.3 feet) off the floor to lie on; you need to do this because the cold air is heavier and will collect at the lowest point of your chamber.

Step 3. To reduce the size of the tunnel entrance by half, pack it with snow, which you have to compact down with something heavy. The entrance must be lower than your sleeping platform to make a heat trap. Use anything available to make the entrance as small as possible. You are essentially entombing yourself in a snow chamber.

Step 4. Make 3 ventilation holes in the roof of your snow–hole using sticks, walking staves, anything you can force through the snow. Keep the vent holes open by waggling the sticks around from time to time. Mark the top of your snow–hole so you do not mistakenly step on it when working outside.

Step 5. Back in your chamber, smooth the ceiling so no water can drip from any pointed surfaces. (Your body will heat up the snow and melt it and your breath will condense as water droplets.)

Step 6. Mark a route from your sleeping platform to the entrance using cord, coloured tape, or anything else you have to hand. This is useful if your snow home collapses and you have to dig your way out (can happen!).

Step 7. Leave a marker outside made from whatever you have available so you can be found if people are searching for you because they may not find you in a snow–hole!

Step 8. Settling in — try to get a layer of insulation between yourself and the sleeping bench. Pine branches are good, use anything possible to form an insulation layer between you and the snow. A snow–hole is considerably warmer than being outside but it is still very cold to live in. Any heat source inside will help, even a candle will add considerable heat but be mindful of the fact a candle uses up oxygen so make sure you have adequate ventilation. 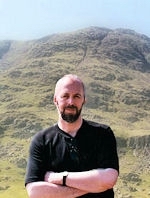