From microwaving popcorn to roasting potatoes around a car’s hot exhaust pipe, humans have developed a variety of cooking methods by which we render food safer, more digestible, and more palatable.

Rock boiling is one of my favorite Stone Age (pardon the pun) methods for water purification and also a great method of survival cooking of food. Some alternatives for survival cooking and water purification are energy intensive and more difficult to prepare (rawhide bags, pottery). Rock boiling requires a fire, some rocks, and a coal-burned container.
I started experimenting with rock-boiling while living in Olympic National Park (WA State). I had heard that some types of rocks were better to use than others, but I couldn’t locate any information regarding which tended to crack (or explode!) and which are keepers for a lifetime. So here are the results of my very limited exploration on the subject at hand.

Let’s begin with the rock boiling contestants. From the nearest extinct volcanic pluton, let’s welcome Granite! Granite is relatively large-grained, which we think doesn’t bode well for this igneous rock.

Although most of this melange of cobbles started out as lowly depositional sand, these glassy rocks endured sweltering heat and enormous pressures in order to metamorphose into the beautiful Quartzites you see before you today!

On a more serious note, there is some Quartz and other igneous rocks in here as well.

And coming all the way from the spreading Pacific Oceanic Ridge, taking 200 million years to get here, it’s Basalt! Fine-grained basalt has a good reputation for withstanding rapid heating and cooling amongst folks doing survival cooking and water purification in the field.

Good luck to all of you!

Ahem. Now that I have that out of my system…

1. Heating up the rocks for rock boiling…

3. Wooden tongs are quite useful in handling the heated stones. Notice the steam escaping from the bottom of the rock as it hits the lake.

Rocks relaxing in the “hot tub.” I subjected all rocks to at least five hot immersions (unless they broke before the fifth trial). Which will survive…which will crack under pressure.

p.s.—I love those tongs. Made from Yellow Cedar (Chamaecyparis nootkatensis)…lightweight, easy-to-carve…just the right width to afford a strong purchase on it when handling an awkwardly-shaped rock.

Poor granite. This species suffered a near 100% failure rate. I’ve been told by a geology professor that water can infiltrate the interstitial spaces between the relatively-large quartz, feldspar and mica crystals and expand the rock when heated. To it’s credit, granite never sent shrapnel flying when it cracked.

Quartzite fared a little better, being smaller-grained and more homogenous throughout it’s structure.

About 50% of these survived. I will note that when quartzite cracked, it sometimes exploded (but shards never traveled more than a foot or so away from the wooden bowl. 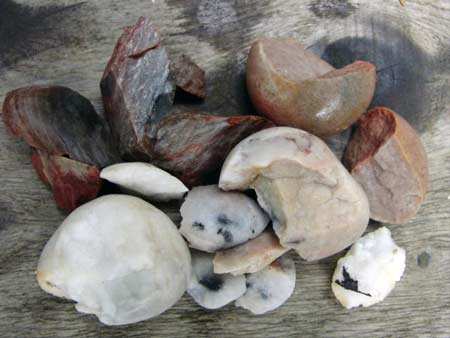 And the rock boiling winner is…

Basalt out-performed the other species of rock by far. Only about 5% of these cracked with use. A few years later, I still use these particular pieces of basalt.

They show no signs of giving out. Incidentally, one can purchase smooth basalt cobbles in fancy home/yard furnishing stores.

After I get established in the San Gabriel Mountains of southern California this Fall, I look forward to testing the various rocks—gneiss, schist, talc, actinolite, pure quartz, feldspar, marble–found there. I’ll let you know how they work out for rock
boiling for both survival cooking and water purification.