There’s tents and then there is the Autonomous Tent

Many of us get out in to the wilderness with our trusty tents stashed away in our packs, drive at our destination, get unpacked and set up and enjoy a night or two beneath the glorious stars wondering about our place in the universe, or we pitch up and hit the waves, or the woodland trails.

I think that’s one of the big differences between what one would call a normal tent and the Autonomous Tent. 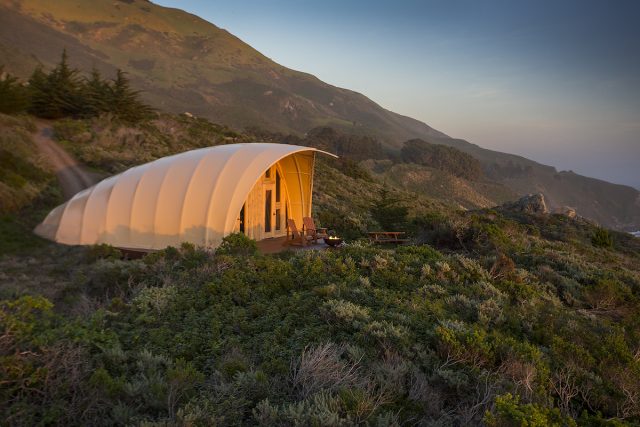 Phil Parr, the founder of the business got the famous Californian architect Harry Gesner involved in the project back in 2012 and between them they’ve produced what can only be described as a palace of a tent, Harry Gesner has taken all that experience of making amazing sea front houses and poured it into a tent! 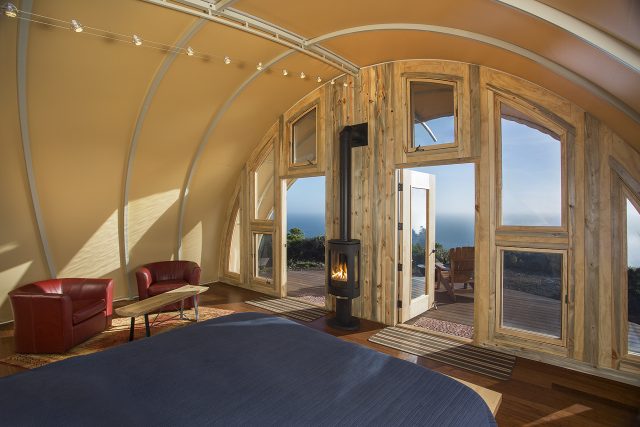 What is the Autonomous Tent?

The Autonomous Tent is an exciting new form of architecture, which has been engineered as a permanent structure, yet can be raised in just a few days and “leave without a trace.” Although these private hideaways provide all of the luxuries of home, they do not require a foundation or utilities. This revolutionary new direction in sustainable living respects every aspect of our delicate ecosystems.

While often compared to yurts, the Autonomous Tent is a modern design with open floor plans ranging 700 to 1,000 square feet with soaring ceilings and grand entryways to showcase property views.

The high-tech manufacturing process ensures absolute precision providing simple installation and a tight seal between fabric, frame, and deck, which typically cannot be accomplished with a yurt, making the structure look and feel more permanent. 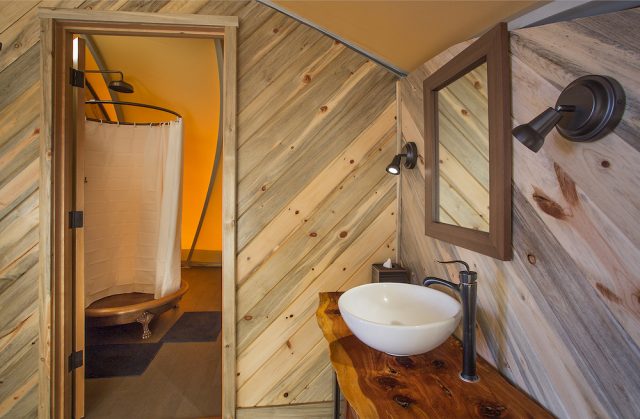 Customers select fabric and insulation for site requirements and may select from several entryway and deck plans to customize their space. These tents are used for both personal and commercial applications, including private gourmet dining experiences, luxury guest suites, yoga studios, spas, cocktail lounges and hunting and fishing lodges.

2013 – The Autonomous Tent Co. was originally founded in 2013 to design the world’s first transportable 5-star boutique hotel that would be located in secluded natural locations for a season at a time. The hotel would be completely powered by the sun and wind and utilize the most advanced water filtration and composting technology. Our commitment to landowners and land conservancies was to “leave without a trace.”
As we began designing our hotel, we gradually realized that we were creating something bigger. We were creating a new form of architecture that would allow us to enjoy the most beautiful places anywhere in the world without destroying our delicate ecosystems. We love seeing the evolution of an idea and simply shifted our focus from creating a transportable hotel to the Autonomous Tent.
2015 – The Prairie Conservation Center installed the prototype Autonomous Tent on its 9,000 acre West Bijou Bison Ranch in the summer of 2015 to hold a series of fundraising events.

2016 – Treebones Resort in Big Sur, CA started taking reservations for it’s Autonomous Tent on April 6, 2016 at a significantly higher price point than its other yurt and nest accommodations and have enjoyed 100% occupancy ever since. The tent is booked out 6 months, so it is best to plan a visit well in advance.

2016 – Commercially available, working with US-based manufacturing partners and various developers and landowners on exciting projects that will be announced later in 2016/2017. 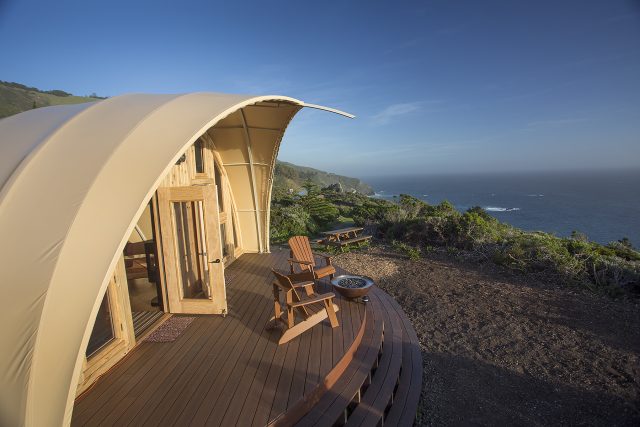 • Headquartered in Denver, CO
• Manufactured in the US, shipped globally
• Used for both Commercial and Private use
• Semi-permanent structure for recreational purposes
• au·∙ton·∙o·∙mous – existing independently or having the freedom to do so.

The unit is powered by its own dedicated solar array, given guests a true ‘off the grid’ living experience in a luxurious and private location, perched lightly on the edge of the world. The unit has over 500 sf of indoor living space, a king size bed, indoor gas fireplace with en suite bathroom including a claw foot shower and flushable composting toilet. The luminous resilient fabric stretched across the sturdy metal ribs glows at night and provides natural indoor lighting during the day.

This is one of the attributes Phil and Harry have tried to instil in they project, the idea is to have a minimal impact on the land they use.