Tips For Surviving A Hurricane

A hurricane is officially defined as any tropical storm with wind speeds exceeding seventy four miles per hour, which as you can imagine causes immense devastation when it hits land and urban areas.

Hurricanes usually begin as a series of small thunderstorms in the summer and fall seasons. If the thunderstorms die away, a hurricane will most likely not develop.

But if those thunderstorms continue and begin to merge with one another, then there’s a good chance a hurricane is heading your way and you need to be ready for it.

HOW TO BE READY FOR A HURRICANE

Southeastern states such as Florida, Georgia, Louisiana, and South Carolina are repeated targets of hurricanes. It is highly advisable that you prepare yourself for a hurricane long before the season begins, making sure your entire family is involved in the process of preparing for a hurricane and knows the emergency procedure.

The first thing that you and your family need to do is come up with a disaster plan. This plan lays out everything that you will do in the event of a hurricane, with preparations for multiple scenarios.

If you have to evacuate, for example, your plan should include a list of things that you will take with you, your main transport vehicle, and your escape routes.

It’s also important for you to have a survival disaster kit that you can access as soon as a hurricane hits. Ideally, this disaster kit should be kept in a backpack so that you can easily transport it with you, and it must include enough food, water, medical equipment, and survival gear for you all to live on for at least three days and three nights.

Everyone in your family, including the youngest ones, should know how to contact emergency services and how to turn off the appliances, gas, electricity, and water in your home as well.

You have two options before you when a hurricane hits: you can either bug out and try to escape the hurricane before it reaches you, or you can bug in and try to outlast it at home. Right now, we’ll talk about what you should do if you go with the latter option.

If you decide to bug in, your home absolutely has to be prepared to withstand the storm. You can reinforce your home by boarding up your windows with duct tape and plywood, closing all of your shutters, and securing the garage doors.

Next, your house needs a shelter location where you and your family will hunker down during the storm. Your shelter cannot have any kind of windows and all doors must be secured. The walls should be strong and ready to withstand the storm.

It’s also important for there to be survival gear, food, water, medical kits, an emergency radio, and blankets inside your shelter as well. If you opt to use the basement as your emergency bunker, take steps to prevent water flooding in.

If you don’t have an official shelter room in your house for withstanding the hurricane, alternatives that you can use include a tight closet, a bathroom, or a bathtub that’s been covered up with plywood.

You should board up your house and corral your family into the shelter a minimum of two hours before the storm hits. You don’t want to take any chances by waiting until it’s right on your doorstep.

Your other option for surviving a hurricane is to bug out. Always head in a northerly direction when trying to escape a hurricane, because hurricanes form in the south and then gradually lose their strength as they travel inland and north.

As with bugging in, you will want to begin the bugging out process well before the hurricane reaches you. If the hurricane is already upon you, then it’s simply too dangerous to try to escape in the middle of it and you need to bug in right away.

When bugging out, you should have an emergency vehicle ready to go. Your emergency vehicle doesn’t have to be a standalone vehicle meant only for emergencies, but it should have survival gear and extra gasoline tanks already stored inside of it so that you don’t have to mess around with gathering your things. Keep your family together and don’t forget allow for pets in your plan. 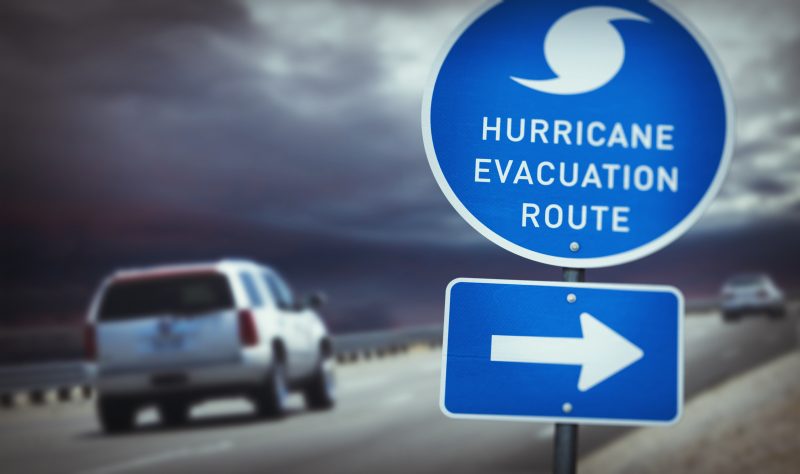 Following the emergency plan that you outlined previously, take your fastest escape route out of the city. But if a road is blocked or clogged with traffic, then switch to another escape route. This is why it’s a good idea to have many escape routes ready to go so you always have a back-up plan if needed.

It’s also important that you know where to bug out to. Are you headed for a rendezvous point or to an emergency shelter? These are questions that you need to answer before you set out.

THE AFTERMATH OF THE HURRICANE

Never emerge from your shelter until you know that it is safe. Usually the emergency services will broadcast a message that the hurricane is officially over and you can step out. Keep in mind that hurricanes can last for hours, so don’t grow impatient with waiting for the ‘all clear’ message to come through.

It’s still important to be careful when checking for damage in the aftermath of the hurricane. There may be falling debris and other hazards, so watch yourself. Avoid trying to wade through flooded areas, since hazards will be hidden.

The basement of your home might also be flooded with rainwater, but you never want to just step into the water because there’s a chance that you could be electrocuted or that it could be filled with sewage. Instead, pump out your basement via a hose through your window before stepping into it.