The Tough Life of Early US Pioneers

This article focuses on tough life of pioneers and what they had to go through before they could be labeled ‘pioneers’.

“The way of pioneer is always rough” Harvey S Firestone.

Pioneering is the best thing that has ever happened to human race. A lot of people view pioneers as picturesque individuals who discovered new things and new places.

We often times don’t talk about the pains that brought the gain we all see and enjoy today. This article focuses on tough life of pioneers and what they had to go through before they could be labeled ‘pioneers’.

PIONEERING; a lifestyle of the strong

A pioneer is a trailblazer, someone who risks all, leaving the known for the unknown. In the early times, many people travel for different reasons; some travel with intent of searching for greener pasture, a better place to farm, a more secured land and so on.

Each pioneer with his own reason travelled a long way to become settlers in a strange land which might have been virgin lands or lands previously occupied by aborigines.

That was the life of pioneers. These ones were not taught wilderness survival skills, they developed the skills and invented novel ones themselves. It was a hard and tough life.

In America, the pioneers are grouped according to their migrations which are in two parts occurring between 1760 and 1850.

The first migration targeted the Mississippi valley, lasting from 1700s through the early 1800s. States like Illinois, Ohio, Kentucky and Tennessee were explored by pioneers. The second migration focused on California, the Northwest and the Southwest and then the Great plains.

During the 1700s and 1850s, there were lots of political and economic events which further triggered the exploration of new lands and then settlements.

Usually, the migration is launched by explorers who will open up the land, probably clear the road through the forest as they move and briefly dwell in a place and after a while a second set of people will come and then establish a permanent community in these lands.

Our pioneering ancestors, due to the simplicity of their existence, had just three basic needs which they cater for; food, shelter and clothing.

These and all other things they used were gotten from the forest and wilderness which they travel through or dwell in. Today, we look back at such life with our rose-colored imagination, and we believe life was definitely better and more peaceful then but the truth is, the life of pioneer was dangerous and unpredictable.

They tested everything out, not knowing which will kill and which won’t. Most of what we have today, they had too but theirs was more primitive and untested.

SHELTER:when pioneer families moved from their original land to a new place, they don’t buy a house like we do today neither to did they have the opportunity to rent a condo.

The only option available then was building your own house. Again I should tell you that they don’t get to buy the building materials but make it themselves. Since they mostly build with wood, they have to cut down trees, and build themselves a suitable home.

FOOD: Stephen Baxter knew what he was saying when he pointed out the fact that “a pioneer family lived beyond the reach of shopping malls.” They truly didn’t have option of grocery shopping. Everything they ate was grown or hunted by them. Their diet was simple and plain consisting of easily grown and foods that can be preserved. They explored leaves around them testing which is suitable for eating and which is poisonous by eating it first.

CLOTHING:T he pioneer wore clothes made by their women who were experts in weaving cloth and spurning yarn. These clothes are cut, styled and sew by hand. Again there was no option of tailor-made cloths.

HEALTHCARE: “if symptoms persist after three days, go see your doctor.” Pioneers were their own doctors and health care agents. They treat ailment with available herbs and other natural ingredients gotten in the wilderness. Whether the herbs they use is the correct treatment for their ailment or not is a knowledge that is often times beyond them.

Any serious illness gets tackled with various improvised herbs and oftentimes ends in death (from use of wrong herbs or the illness itself) and if luck is against them, an epidemic could wipe out half of them leaving only a handful that is lucky enough to leave.

SECURITY SYSTEM: They had no phone to call 9-1-1 anytime they had trouble. Gosh, there was no 9-1-1! The best ways they take care of their security was to travel in large groups and are usually armed with knives, swords and maybe riffles.

TRANSPORT SYSTEM: Like everything else, the transport systems evolved with time. The first means of transportation was the ever reliable human legs; these can take them as far as they want without deserting them. 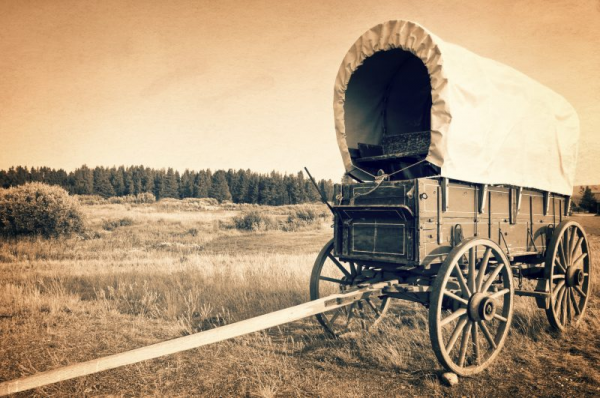 The rich ones of course could afford horses or mules and later they began to use carts which are attached to their horses. A major breakthrough came when the towns and communities were established and connected and railroads were built. They began to travel by wagon trains.

Migration was difficult for our pioneer ancestors because of all the troubles they had to go through just to get established in a new place. Considering the difficult and rough life they had to live, no wonder they were bestowed the befitting title of ‘pioneers’.