Slithering rocks of Death Valley, sailing stones, gliding stones, wandering rocks, and moving rocks are just a few of the names for rocks that move mysteriously across the Death Valley desert with no obvious means of locomotion—no strong wind and nothing moving them.

For over one hundred years, no one has been able to explain the phenomena until 2014 when Dr. Richard Norris, Professor of Paleobiology at Scripps Institution of Oceanography in La Jolla, California.

His cousin James, and their team set up time lapse photography and GPS tracking and were able to determine that the rocks were hydroplaning across early morning ice as it melts.

Death Valley National Park is located in Eastern California and Western Nevada just northwest of Las Vegas. According to the US Department of the Interior, the park was established on October 24, 1994 at the lowest point in North America.

The average daytime temperature runs in the low one hundreds, and it doesn’t get much below eighty degrees at night in the summer.

The Racetrack Playa, a dry lake about three miles long and a mile wide between the Cottonwood Mountains and the Nelson Range is the spot where most of the moving rocks are found.

The rocks leave a trail in the mud which remains after the ice has dried. They sometimes move parallel to each other, move in reverse directions, make sharp turns, and move for as little as eighteen seconds to as long as fifteen minutes.

Some of the rocks, weighing up to seven hundred pounds, move frequently while others take years to move just a few inches.

At first scientists believed the rock movements were caused by dust devils, but the wind created by those is not strong enough.

Without modern technology one would have been forced to sit for days or even weeks to see a rock move causing scientists to guess that it could have been caused by high winds, liquid water, ice, or ice flotation according to PLOS ONE where Dr. Norris’s research paper can be found.

In 2013–2014 more than sixty rocks had moved about seven hundred feet during December and January and many had moved multiple times.

Dr. Norris and his team set up a weather station from the Sweeney Granite Mountains Desert Research Center at Racetrack Playa to study the wind speed, temperature, rainfall, and GPS location on the most active areas of rock movement. 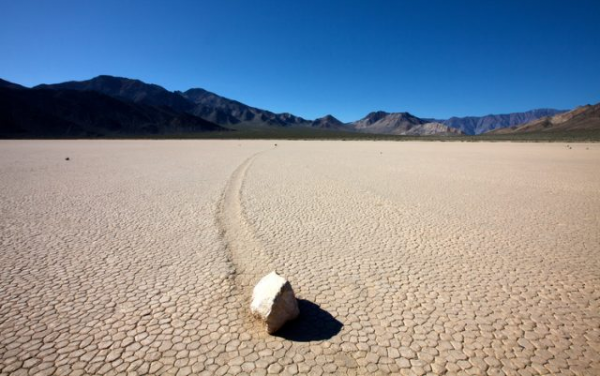 A time lapse camera was set up, and fifteen limestone rocks were fitted with GPS devices and set down on the floor of the desert. The team came by to download the data and replace the batteries about five to eight times per year.

The only significant rainfall was in late November when a small pond was created and then froze the next night and remained until January, alternately freezing and thawing.

In the daytime when temperatures rose on clear days, some of the ice began to crack causing floating sheets of ice which moved the rocks and left trails in the mud.

The number of rocks in the way of splintered ice determines their direction and speed. With alternating freezing and thawing, some rocks are sent on their way multiple times.

Dr. Norris, quoted in NPR said, “They are just going every which way out there, but in a very regular kind of fashion — like they’re moving in fleets. Every couple of years somebody goes out there and tries to figure out what’s going on.”

Dr. Norris still has not figured out how the largest boulders move and intends to develop a plan to observe that phenomenon.

He continues to believe that there is more to learn and describes the study as pure science as the people involved in the research share the same desire to solve an interesting problem. Even more importantly, as he says, “It’s so much fun!”