A guide on how to make a paracord slingshot 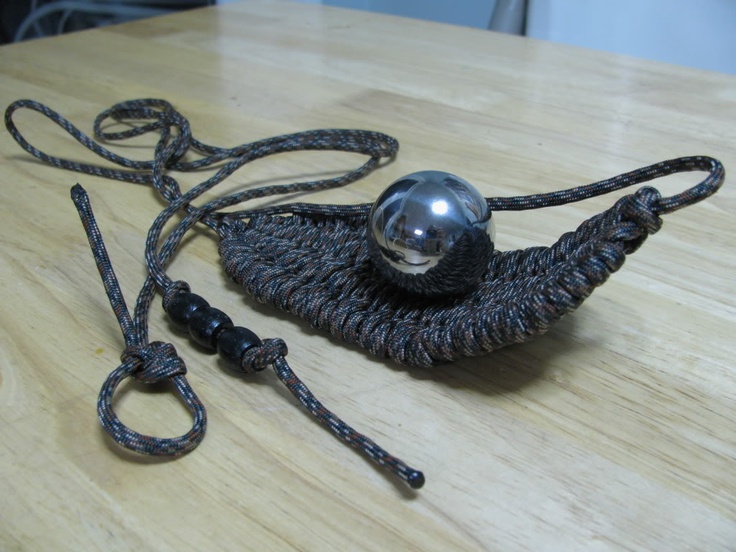 A sling has a small cradle or pouch in the middle of two lengths of cord. The sling stone is placed in the pouch. The middle finger or thumb is placed through a loop on the end of one cord, and a tab at the end of the other cord is placed between the thumb and forefinger. The sling is swung in an arc, and the tab released at a precise moment. This frees the projectile to fly to the target. The sling essentially works by extending the length of a human arm, thus allowing stones to be thrown much farther than they could be by hand.

The sling is inexpensive and easy to build. It has historically been used for hunting game and in combat. Film exists of Spanish Civil War combatants using slings to throw grenades over buildings into enemy positions on the opposite street. Today the sling interests sportsmen as a wilderness survival tool and as an improvised weapon.

The sling is an ancient weapon known to Neolithic peoples around the Mediterranean, but is likely much older. It is possible that the sling was invented during the Upper Paleolithic at a time when new technologies such as the spear-thrower and the bow and arrow were emerging. With the exception of Australia, where spear throwing technology such as the woomera predominated, the sling became common all over the world, although it is not clear whether this occurred because of cultural diffusion or independent invention.

A skillful throw requires just one rapid rotation. Some slingers will rotate the sling slowly once or twice to seat the projectile in the cradle.

One makes an overhand throw, using the sling to extend one’s arm. The motion is similar to bowling a cricket ball. This is relatively accurate, instinctive and quite powerful. One faces 60 degrees away from the target, with one’s non-throwing hand closest to the target: thus, imagining the thrower at the center of a large horizontal circle with the target at the 12 o’clock position, a right-handed thrower would orient one’s body toward 2 o’clock, with the arm rotating vertically in the 12 o’clock plane. The coordinated motion is to move every part of the body, legs, waist, shoulders, arms, elbows and wrist in the direction of the target in order to add as much speed as possible to the stone. One releases the projectile near the top of the swing, where the projectile will proceed roughly parallel to the surface of the earth.

Another method of release said to be favoured by slingers firing into grouped or massed targets is an underhand throw. The motion is similar to that of throwing a softball. The trajectory arc is relatively high. The thrower stands 60 degrees away from the target, and takes one step forward from the trailing foot, letting the sling swing forward. Range is said to be increased with this method, sacrificing accuracy. Several historians have conjectured that this was the most commonly used method in ancient warfare due to its practicality.

There are also sideways releases, in which the swing goes around; however, these throws make it very easy to release the projectile at a slightly wrong time and miss the target.