Siberian moose not only look mysterious and abnormal; they even carry the genes of ancient Elks that are thought to have vanished or gone extinct some 24,000 years ago.

Researchers have claimed that they have discovered these genetic gems hidden deep in the DNA of modern-day gangs of moose that have remarkable similarities with the genes found in the remains of the ancient animal. The match was found after sequencing against the records kept in the International Computer Database GenBank.

Moose were being reduced in numbers by hunting and human activities that reduced the areas they inhabited, this is being addressed with the re-introduction of Moose into some of their former habitats. The Moose in Siberia are the focus of this study, but Moose can also be found in Canada, Alaska, Russia, New England, Latvia, Estonia, Fennoscandia and a number of other countries.

They have few natural predators to be wary off, with Bears, humans and Grey wolves being the foremost of them.

The genetic variations are believed to have been widely spread among the ancient moose sometime between 30,000 to 40,000 years ago. However, as the Ice Age started reaching its Zenith; around 18,000 to 24,000 years ago to be more precise, these genetic lines also disappeared.

According to Olga Nemoikina, who is the researcher at the Biological Institute of Tomsk State University, the Western Siberia are can be classified as a white spot; which means that no molecular study of animals has ever been held in this region. She added that the discovery of the moose’s ancient gene seemingly confirms the existence of refugium. 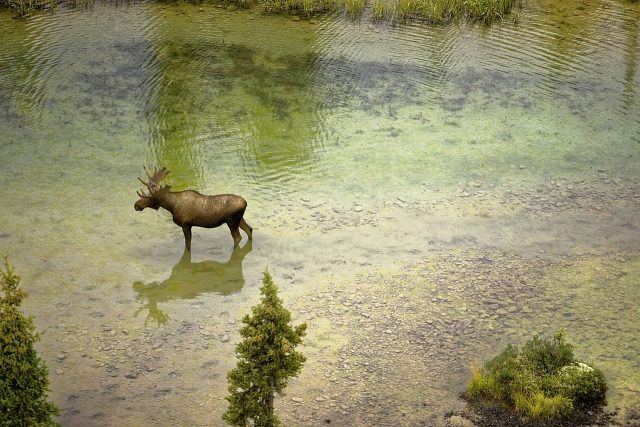 Refugium is the name associated with the theoretical places where populations (of animals and even humans) can evolve to survive in extremely hostile and unfavorable conditions like glacial areas or deserts.

Nemoikina believes that the Western Siberian region can be considered as fairly ideal plain, as the absence of any large natural barriers allowed the moose were able to spread wide and pass very rare genetic lines.

Olga believes that the moose were saved in western Siberia and the same applies to other animals that existed in prehistoric times.

The conditions were hostile, but the overall environment and life’s ability to thrive in those conditions must have contributed in preserving these genetic lines.

When the population of these Elks grew again, these genetic lines returned to the common gene pool that effectively increased the biodiversity and adapted to the change in their habitat.

Talking about the wildlife in the region, Nemoikina said that the animals found in the region are a sort of genetic repository for those species which live and thrive in these harsh conditions.

Olga Nemoikina was also involved earlier in a joint research project with specialists from the A N Sieverts Institute of Ecology and Evolution in Moscow. She had found, during the course of her research, that the moose found in the western Siberia contained American Haplogroup, challenging the previously held notion that western Siberia was home to only European moose.