Lucky for me I am not a great drinker of alcohol as if that was not the case I may have never found my room at the Fes Riad I was checked into!

The delights of this North African city of culture and learning could certainly teach you one thing and that was how to locate your bedroom in what appears at first glance to be a labyrinth that Daedalus would have been proud of and suitable to baffle Theseus with.

What increased its problematic solving was that it was not just in two dimensions but three dimensions. Similar winding narrow stairs of black, green, white and yellow mosaics that in order to go down you have to go up first and vice versa so any extra consumption of drink was likely to extend dramatically the time it took to relocate your room, if ever!

The Riads of Fes but some also spelled Fez, do offer a more authentic type of homely and luxury accommodation in the city, with rooms situated off an open central courtyard with fountains and pools providing the sound and cooling effect of running water as a relaxing option from the large international brand style of hotels. 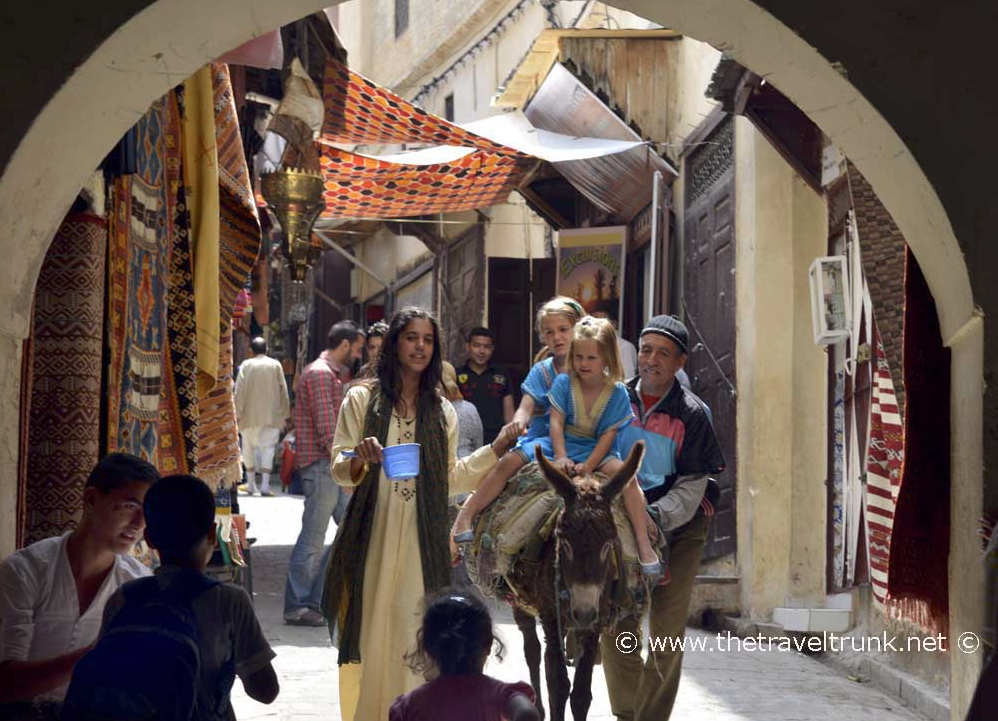 A Riad provides a wonderful oasis from city life the inward looking architecture design shields one from the bustle outside. In a true Moroccan style with no two rooms the same I found, Riad Maison Bleue, a charming retreat and located just perfectly.

Staying on the very edge of the medina my room had open views to the hills that lay to the north of the city but it was also perfect for exploring yet another labyrinth that of the medina itself.

The busy narrow market alleys that once entered were yet another challenge for those tourists that prefer a puzzle along with the experience of another ancient culture. This medieval complex that is the oldest part of Fes is a wonder of color, sound, and smells!

The smell, I will deal with first. It is what Fes /Fez is ironically the most pictorially renowned for. It is the colorful paint pot like appearance of the leather tanning area just off the medina that provides an odor of some magnitude.

Describing the aroma, well I have to say it does take your breath away and the chances of smelling it anywhere else in the world is damn well pretty remote. Rotting flesh and pigeon droppings are involved, to give you a clue should you like to re-create it for your own amusement. 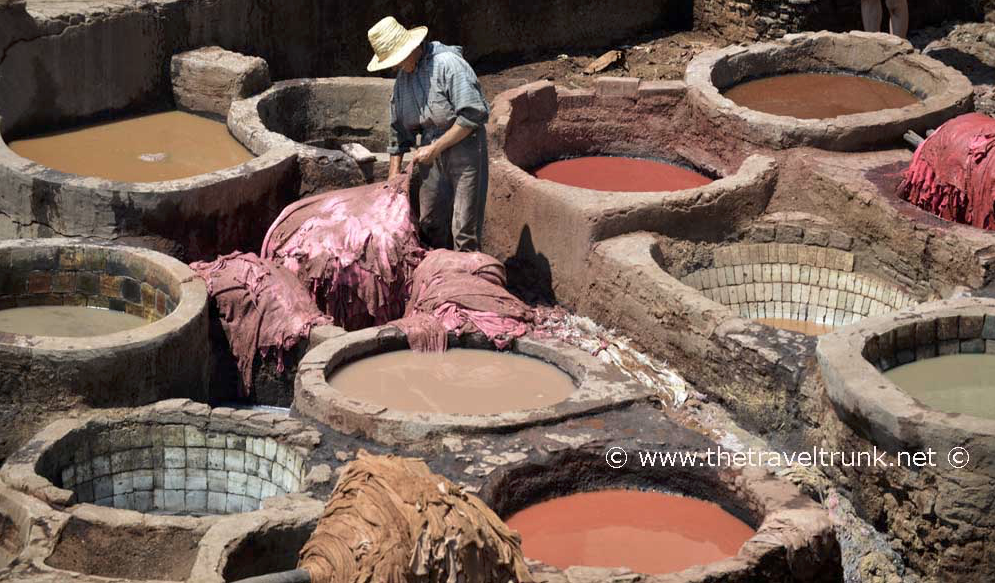 Animals are key in the area around this part of Northern Morocco it is certainly the ‘bread basket’ too of the country and driving towards the former Imperial city of Meknes you are left in no doubt as it appears nearly every square metre of this fertile farming area is planted with a myriad of crops or with grazing farm beasts.

This is Berber country it was also the most Westerly outpost for the Romans 2,000 years ago in North Africa. With the ruins of Volubilis just over one hours drive from Fes and so worth seeing with its typical Roman street layout and some very fine mosaics still in situ.

As the most remote outpost in its time, it would have been a stunning city sitting high on a plateau with all round views, ideal for defending it, with running water sewers and under-floor heating the Romans stationed there would have felt very much at home.

A short journey back to Meknes with its high-fortified defensive walls some 25 miles long winding around it is, astounding! Punctuated with ornate fortified gates in the wall the main focus for all visitors is that of Bab Monsour gate a work of fine Arab style and detail.

Near to its city centre inside another two walls is a giant granary that was for sure ‘The Bread Basket’ and the adjoining Royal Stables covering nearly four acres.

Its ruling king at the time Sultan Moulay Ismail was able to store enough grain in it for three years should the city be attacked to feed both humans and its horses, that he appeared to love even more.

Much of the cavernous grain storage buildings are still intact but what a sight the stables must have been when they were in perfect order the tens of interlinked arches can still be seen.

One unexpected and strange find before I left the city was a beautifully manicured golf course right found within the former grounds of the royal palace.

Fes is the Oxford, Cambridge or Harvard of Morocco as a seat of university learning that is also the oldest of any in the world, a 9th century institution. As well as a spiritual center it was at one time the political and commercial one for but Casablanca now takes on those roles.

The narrow streets of Fes’s medina were surely not that different than they are still today. The alleyways in the old town are bustling, crowded and colorful almost overwhelming for a first time visitor; it’s hard to know where to look first.

In the shaded alleys with fierce sunshine slashing through every once in a while glistening off shiny copper or brassware focusing in on what to look at is not that easy, as is trying to take photographs in some tricky lighting conditions, but satisfying never the less when they come off. 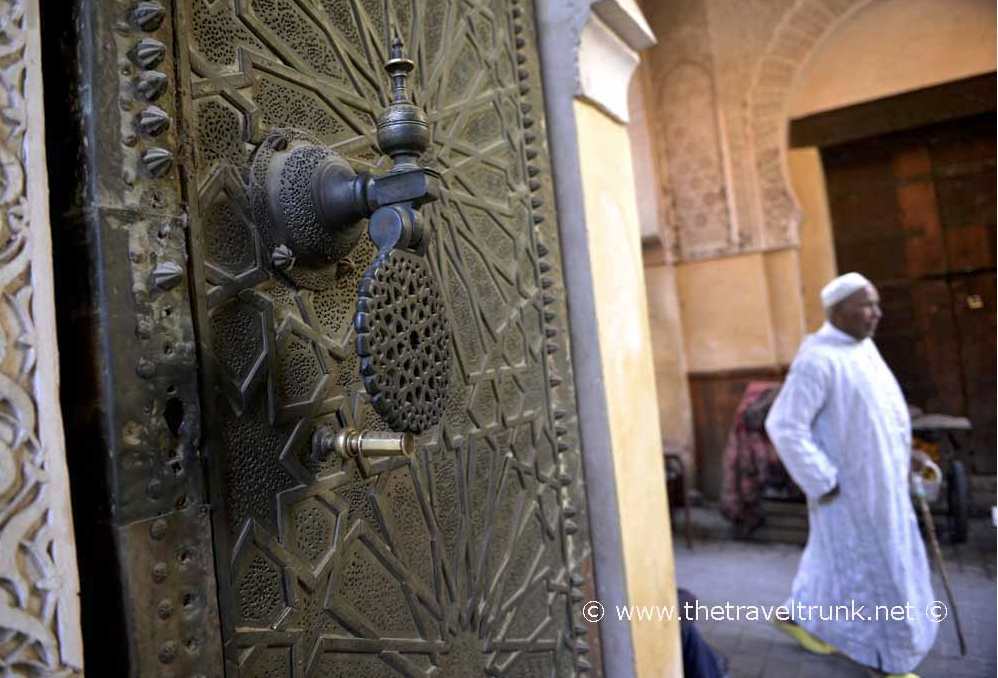 Uneven and on a slight gradient the main street in the medina is simple to navigate but with so many turnings left and right its very easy to get disorientated, but you are sure to discover sights and smells that you have never seen before, but may prefer never to again!

I came across an abandoned building described as a former palace, with chickens and cats having the run of the large central open garden, the most ornate mosaics on the walls in pretty perfect condition but much of the highly detailed carved and painted wood was in drastic need of refurbishment, with collapsed ceilings and roof sections it was sad to see that it had not come to the attention of the city elders as a project worth bringing back to life.

Fes or Fez is certainly a place I would highly recommend; four days would be enough to scratch the surface of this labyrinthine city, but as with any city of such great age and culture you could be there four weeks, four months or four years and still be learning as they are still doing at the University of Karueein 11 centuries later! 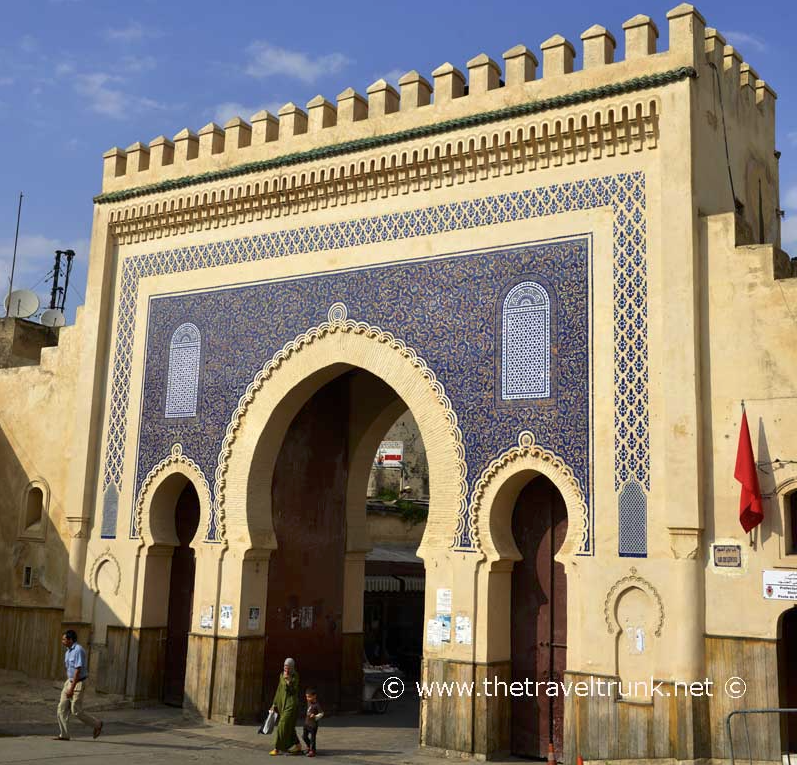 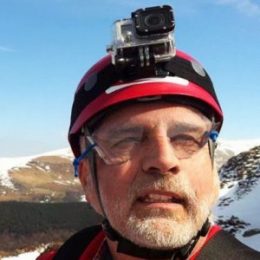