Blue whale calves spend almost an entire year in their mothers and are born at about seven meters long. They typically weigh between five and seven tons. For the first eight months of their lives, they gain about 3.7 kilograms per hour in body mass. That’s because they drink about 225 liters of their mother’s milk per day. We’ll talk more about whale milk later. Just suffice to say that it’s very fatty and very nutritious.

Whales can get sunburns

It was long known that whales could get blisters on their backs. However, for decades, the cause was unknown. Now, recent research has shown that the likely cause is acute sunburn. After all, whales spend a tremendous amount of time at or above the surface of the ocean. Some scientists believe that the growing hole in our ozone may be to blame. However, it’s as yet unknown why exactly this occurs.

The sperm whale has the largest brain in the world

Located in their massive heads, a sperm whale’s brain can weigh up to 9kg. That’s about as heavy as a Dachshund. Not only that, but the rest of the head which makes up about a third of their body is basically a giant container of oil. It’s this oil that made sperm whales so popular for hunting in the last couple of centuries. You could park a car inside of the chamber filled with oils in their skull. Half this high-value oil is actually called ‘junk’.

The Cuvier’s beaked whale is the world’s deepest diver

Most whales only dive for up to a half hour maximum. However, the Cuvier’s beaked whale has been recorded to dive up to 3km for over two hours! To put that into perspective, scuba divers rarely go deeper than 40 meters. 3km is almost a thousand times that depth. 3km is about half the height of Mt. Denali, the tallest mountain in North America.

Bowhead whales can live over 200 years

Now, lots of species of whale can live for a long time. Most live longer than humans, and many live over a hundred years. However, bowhead whales can live to be over 200 years old. Scientists are still unsure just how old they can actually get. The ocean is a mysterious place, but these ancient creatures probably know some things we don’t.

The southern right whale has the world’s largest testes

Believe it or not, the southern right whale’s testes can weigh up to one metric ton per set. One ton! That’s about as heavy as two adult grizzly bears. So, one grizzly bear per ball, so to speak. Sorry for all the strange images this probably puts in your head. If you’re curious about the biggest testicles relative to body size, well, the answer is very different. In fact, the animal with the largest balls to body mass ratio is much, much smaller. I’ll let you google that one.

Although right whales have the biggest balls, so to speak, grey whales have the wildest sex. They almost always mate in threesomes. Although we can’t exactly tell how kinky their minds are and their sex doesn’t look anything like human sex, grey whales almost always mate in threesomes of two males and one female. They aren’t the only aquatic life to exhibit what some might consider being strange sexual habits either. The sea is full of strange sexual acts.

One popular fact on the internet is that a blue whale’s heart is as big as a Volkswagen Beetle. However, that’s not exactly true. Both the heart and the car are about five feet tall and wide. However, the Beetle is about 14 feet long versus the blue whale heart being about four. Not to mention a VW Beetle is made of metal and weighs roughly 3,000 pounds whereas the blue whale’s heart weighs only 440 pounds.

But still, 440 pounds is hefty. That’s more than your average reindeer and about half as heavy as a full-grown horse. The aorta of a mature blue whale is big enough for a child to crawl through. After all, with such a big body, they need a big heart to pump all that blood.

Most species of whales migrate long distances across the oceans. Sperm whales are well known to travel between cold arctic and Antarctic waters for feeding and the warmth of near-equatorial latitudes for mating and breeding. They usually make this trip twice every year between summer and winter. However, the longest recorded migration was made by a female grey whale who traveled 14,000 miles on a round trip between the eastern coast of Russia and the warm waters of Mexico.

In 2013, scientists discovered by studying a dead blue whale that a whale’s earwax is deposited at six-month intervals much like tree rings. They discovered they could determine the whale’s age by counting these rings. Not only that, but they could also tell a good deal about its environment over time. That’s because earwax is highly fatty and stores a wide array of chemicals. This can give scientists detailed understanding of the chemical composition of the ocean over time as well as records of whale migration patterns.

There is only one known albino humpback whale in the world

Imagine the unicorn of the sea, just without a horn. It’s actually that rare. However, it has been sighted and photographed. Just don’t expect to see it on your next whale watching tour. Even if you travel to the eastern coast of Australia where he is spotted annually migrating north and south, it’s not likely you’ll be the one to spot him. His name is Migaloo, and if you want to know more, he has his own website and Twitter account… seriously.

No, they don’t jump up onto land and attack the moose. However, orcas have been known to attack moose that are swimming between coastal islands off the northwestern coast of North America. However, this fact is misleading. It’s not because it’s false, but it’s because orcas aren’t actually whales, they’re dolphins.

Ambergris is a substance found in the digestive tract of sperm whales. It can sell for up to $20 a gram. Although when it’s fresh, it smells like whale fecal matter, it takes on a rich, earthy scent. Perfumes high in ambergris have been sold for up to $11,000 per bottle. For the smell of whale poop, yes.

Back in 2008, this was discovered quite by accident when a team of scientists drifted into a pod of sleeping sperm whales. It is now believed that sperm whales spend around 7% of their day in a drifting, vertical sleep. That makes them one of the least sleep-dependent mammals on the planet.

Now, whales are pretty fatty. And if you remember earlier on, we learned that baby blue whales grow by about 3.7 kg per hour and drink around 225 liters of mama’s milk per day. Well, it turns out these stats are related because whale milk is really fatty. And by really fatty I mean up to 50% fat. That makes it about the texture of toothpaste. Yum. 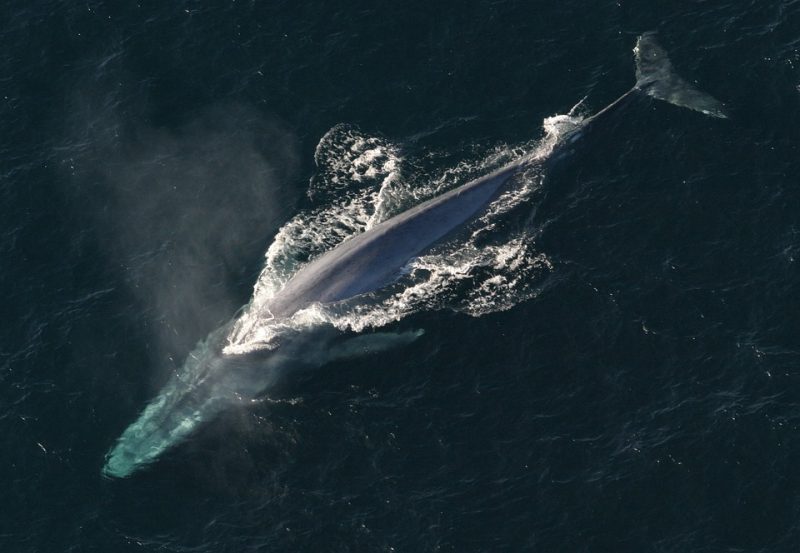 A lot of complex math went into this calculation completed by Jeremy Goldbogen, University of British Columbia. But the results were staggering. The seminal observation that prompted this study was that all of the largest marine animals, both fish and mammals, that have ever lived are filter feeders. That includes the blue whale, whale shark, and leedsychthis. That means they use lunging techniques to feed on massive swarms of tiny sea creatures. Ironic that the largest animals in the world got so big by eating some of the smallest ones. However, upon crunching the numbers, Goldbogen discovered that upon lunges into particularly rich schools of krill, blue whales could gather up to 20 times the number of calories they expended on the effort.

Whales walked on land about 47 million years ago

Evolution is a constantly evolving science. But the ancestors of whales are believed to be descended from the ancient Indohyus. This was a small creature about the size of a cat. It’s believed that they learned to dive underwater to avoid airborne predators. Likely, this adaptation led to hunting underwater and increased aquatic lifestyle. However, all whales are believed to have descended from this one common ancestor which were originally terrestrial.

If you have a good story to tell or blog, let us know about it on our FB page; we’re also happy for article or review submissions, we’d love to hear from you.