How to Talk with Grizzly Bears – Part 1

We’re grateful to the amazing Nikki van Schyndel (aka Daisy Crocket) for sharing some of her life and adventures with us here on Outdoor Revival.

There’s hardly anything more breathtaking in a pristine wilderness setting than finding an enormous, gorgeous waterfall and an 800-pound grizzly bear fishing in the river below it. Whenever I’m blessed with seeing such a scene I always say, “Now that’s National Geographic!” 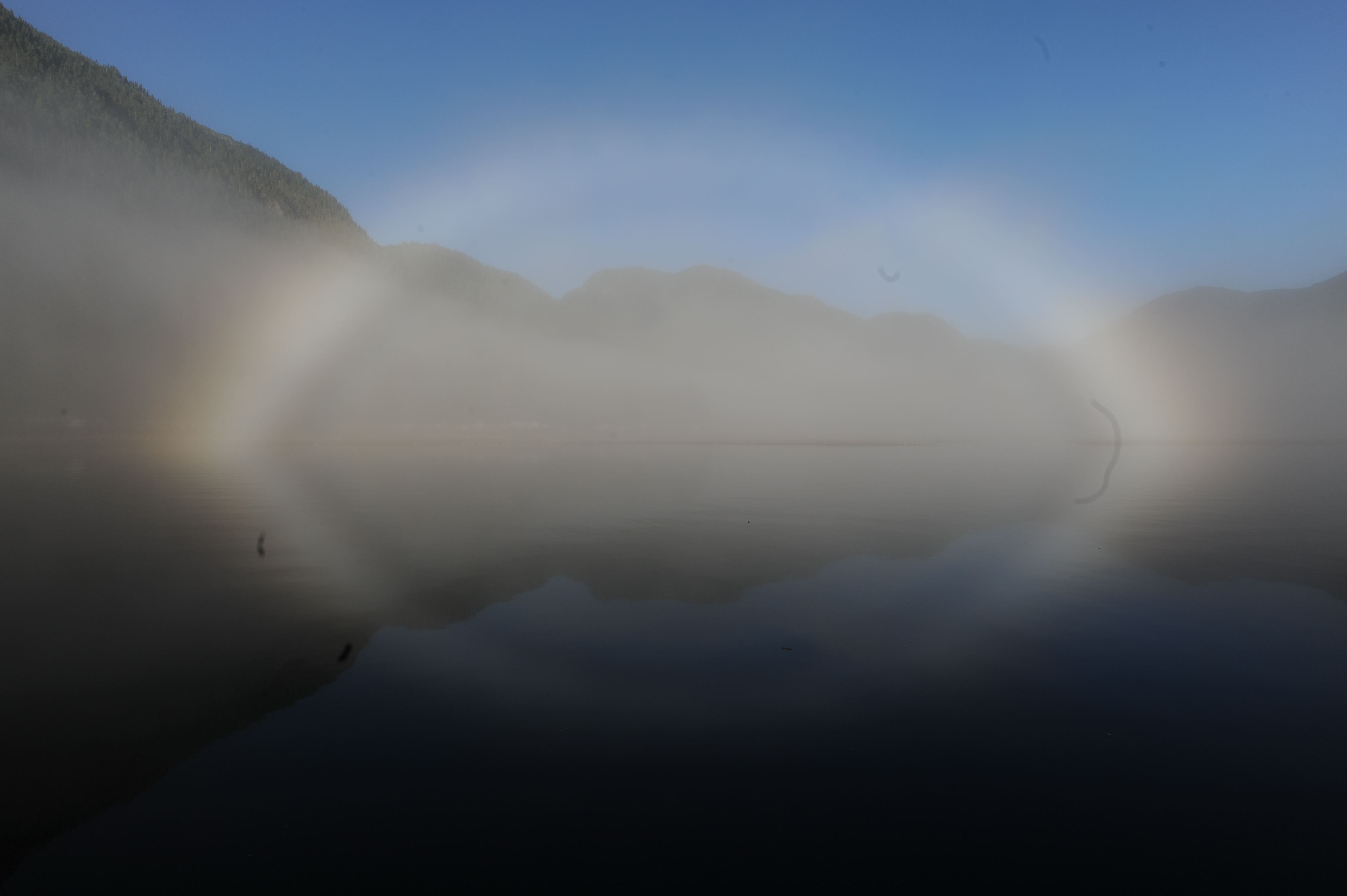 When you’re wrapped up in awe and rainbows, it’s pretty hard to snap yourself back to the tech world of noisy shutter buttons and small view finders, plus I’m addicted to basking in full awareness during such blissful moments. You’ll just have to picture the scene in your mind with me….
…My friend and I are slowly boating down a meandering creek with vibrant green sedge flats along its edge and salmon swimming below. Dragonflies are darting overhead and the air is rich and full of life.

You can hear the gurgling and swooshing sound of faster rapids in the distance. As we round a sharp corner the view opens up and we see a gigantic, roaring waterfall, slightly hidden behind a sparse glen of evergreen trees. You can’t quite see the pool below it, but you know it’s one of the most beautiful wilderness settings you’ll ever see. It has to be visited.

With low tide on its way, I pause as I step back to look at the boat we’ve anchored as deep in the creek as possible. I give the situation a 50/50 chance of not getting beached like the day before. 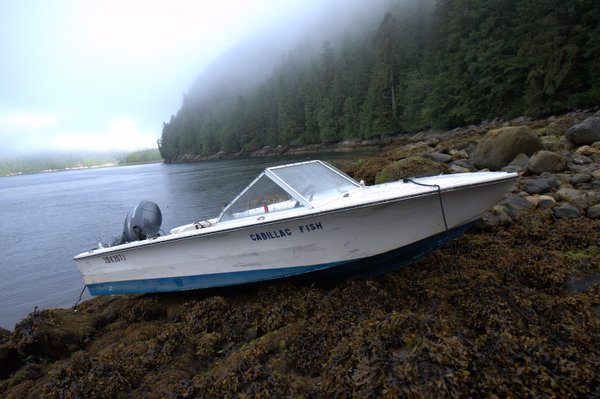 Now Donn is only on Day 3 of his Grizzly Etiquette Training, and I’ve been teaching him “in the field” and “on the go” so he’s been forced to learn quickly! The second day was actually a night stake out along a salmon creek and I think he nearly peed his pants when the brush beside us started moving, and we could hear the crack and snap of branches under the footsteps of a rather large animal moving toward us.

Donn wasn’t ready for the up close and personal nose sniff from a grizzly bear or the scream of a cougar, so I silently asked the fella to detour around us so we could avoid any fearful confrontation. In order to stand safely in the shadow of a bear you have to be free of all fear.

While we carefully made our way through the uneven, marshy sedge flat, I somehow let Donn get ahead of me… too far ahead of me. In a flash I assessed our training progress:

Here was a guy, straight from the city, wearing a pumpkin orange jacket, fluorescent yellow hat, bright blue shorts and a heck of a big camera dangling around his neck, picking his way along the slippery, algae-covered rocks, along the open river bank with his eyes in tunnel vision staring at his feet. He looked like a Yellowstone tourist who had just jumped out of his car for a quick photo of a deer on the side of the road.

The thought of tapering down my vision of seeing a bear “up close” popped into my head, but it was too late, I spotted a huge brown bear ambling down the creek toward us. I took cover in the tall sedge with a great view of the grizzly searching for salmon. After my series of bird call whistles, which I never actually taught him and whispered, “Hey Donn” ‘s that were never heard, I finally opted for the straight up yell: “Get down Grizzly bear!”

Without hesitation, he drops to the ground, and I motion him to get back on the bank and into the sedge, just as the bear starts swimming and snorkeling directly in line with us.

Like a perfect student, Donn slowly crawls toward a log, which will break up his human form. Then, with way too much movement, he decides to turn his jacket inside out to reveal the black inner lining. I’m thinking, “Ok, good idea, but we’ve got an 800-pound grizzly nearing shore now, so Please – Stop – Moving. Just when I thought all was going to turn out perfectly, I notice Donn belly crawling up and over the log in plain view.

Thankfully, once Donn got into position, not even a mosquito could have made him flinch. He had “become” the log. Unfortunately, logs don’t have eyes and he stayed hidden so well he never saw the grizz lumber onto shore 20 steps away and take a big ol’ grizzly bear shake, with water droplets sparkling and spraying off his coat. It was like living in an IMAX movie.

The bear took a few steps toward the sedge and then raised his head and took a long sniff. I silently spoke, “It’s ok big fella. No need to be alarmed.” I sent him the most peaceful wave of energy I could feel and envision.

He took a few more steps and then I noticed Donn lying 2 feet from the main bear trail; on the wrong side of the log. The grizzly stood up on his back legs to check things out with his superhero sense of smell.

I zapped back from my blissful state of Lala Land in which I saw myself nearly touching a grizzly bear and realized I was living a joint experience. Donn was doing amazing, but just like the bear, I could feel he wasn’t quite ready for a dominant male grizzly to brush past him.

I immediately asked the bear to move off into the forest and though we both stayed hidden I stopped being invisible; made my thoughts loud and my energy very human. The bear instantly got the message and retreated into the forest. I closed my eyes and basked in the moment, incredibly thankful for such a beautiful encounter, until I saw my boat in my mind’s eye… 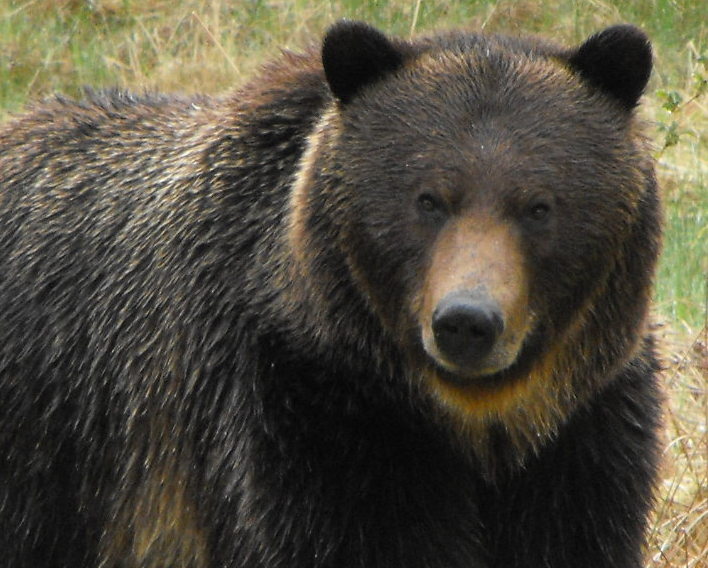 Oh yes, it was high and dry! With our own superhero powers we miraculously lifted and rolled the Cadillac Fish along the slippery rocks to escape the receding tide. Thank you big brown bear for being the teacher. 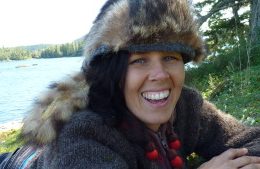 Nikki van Schyndel (aka Daisy Crocket), ventured out into the wilds of British Columbia 12 years ago to live her childhood dream of surviving off the land with primitive tools, she was there for a year and a half completely immersed in the wilderness, since then she’s found her balance, now living in a cabin she built and having a few modern conveniences she is still living in the wilderness, she is blogging, vlogging and working hard to survive in a beautiful place that makes her happy.  She’s also the author of  the best selling book ‘Becoming Wild’ about her experiences learning to survive and ultimately thrive along the rugged, isolated rainforest of British Columbia.